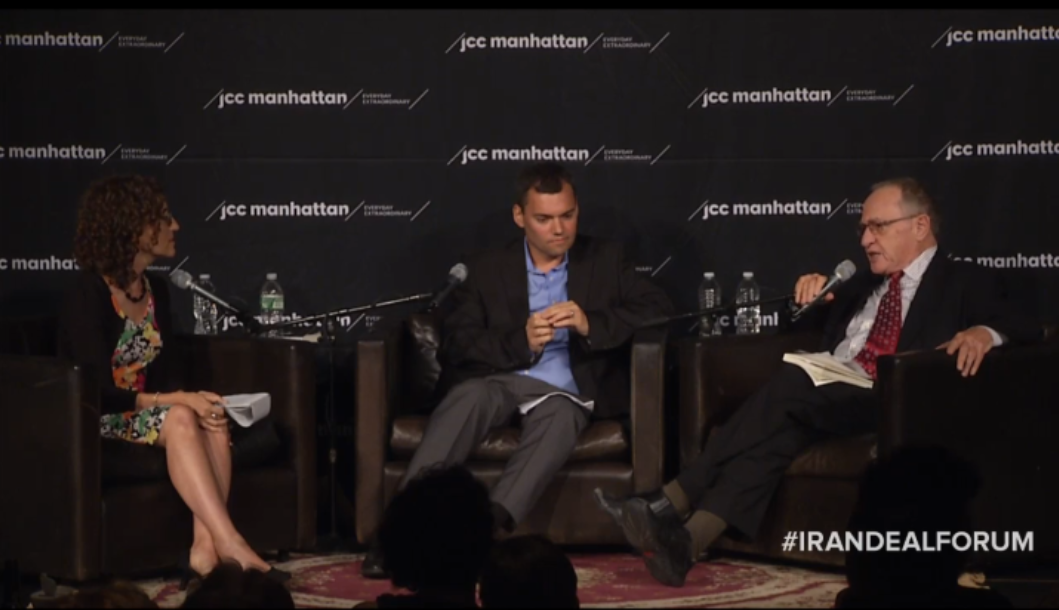 Dersh vs Beinart: Get off my lawn edition

The epic The Israel Forum: The Iran Deal debate last week at JCC Manhattan between the two giant thinkers in the Jewish pro-Israel camp, Peter Beinart and Alan Dershowitz, encapsulated the common breakdown in the pro-Israel community.
Beinart, speaking in support of the Iran deal, went out of his way to acknowledge that he respects Dershowitz (and the Jewish right’s opinions) however incoherent and misguided they are. The same respect was not reciprocated from Dershowitz (as is often the case with the Jewish right wing) who went on to attack, aggressively, Jane Eisner, the moderator and malign J Street and President Obama (insinuating that President Obama “doesn’t like tough Jews“) as anti-Israel even though the Iran deal has the support of the majority of the Jewish members of Congress, the American Jewish community and many of Israel’s staunch supporters.

It is infuriating that the Jewish right feels entitled to hand out pro Israel “not kosher” labels to those who simply disagree with them. And assert an imaginary exclusive ownership of caring for Israel. It’s not Jewish, it doesn’t help Israel and it undermines the entire pro-Israel camp and needs to stop. Jewish leaders and communities need to reject this rhetoric as Larry Gellman so eloquently does here:

“Dershowitz, whom I met 20 years ago when I was chairing the Federation and Israel Bonds campaigns… I have admired you for most of my adult life… Please don’t continue to destroy the amazing legacy you have built with more of these nasty and false accusations against J Street and others with whom you simply disagree… every single one of your slanderous accusations is either an outright lie or a gross distortion.”

One thought on “Dersh vs Beinart: Get off my lawn edition”