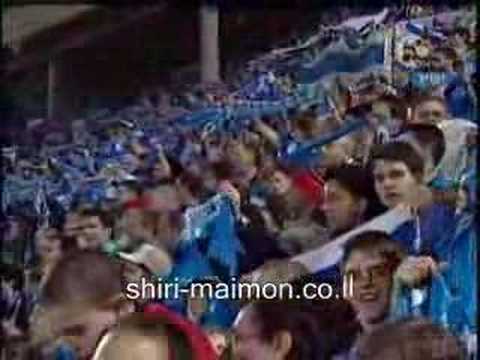 Hey, y’all. It’s been a while. I’ve been busy having a real job instead of blogging here or at my personal blog. Anyway, this has been crossposted to my new blog at davidamwilensky.com, which you should all go check out.

I tip my hat to Philologos, the pseudonymous author of the Forward’s language column, for two reasons:

So bravo to you, Philologos for admitting you were wrong and for making some nicely conceived suggestions for rectifying the problem of “Hatikvah.”
And with that, let me explain why he’s still wrong this time. As identified by Philologos, the basic problem with “Hatikvah” is contained in this rhetorical: “How, really, can one expect an Israeli Arab to sing about a Jew’s soul stirring for his country?” But I’d go one step further: How can one expect a group with an equally valid claim on the land to sing a national anthem that is a clearly not just an Israeli song, but a Jewish song?
He concludes that “Hativkah” should not “be abandoned for another anthem, or sung to the same tune with new words” because “there’s not point in accommodating the feelings of Arabs by trampling on the feelings of Jews.” Again, I’d go even further, but we’ll come back to that. First, Philologos’ specific problems with “Hatikvah”:

If we accept his premise that the song should stay, receiving only minor textual alterations, these four are indeed the chief problems. I’d add a fifth: The geographical perspective of the song is distinctly western, since it refers to Israel as “the margins of the east.” That sweeps the Arab perspective under the rug and takes the perspective of Israel’s various African and Middle Eastern Jewish minorities right along with it.
In other words, the problem is not a few words, but the entire origin of the song. It is not an Israeli song, but a Jewish song. And it’s not simply Jewish, but Ashkenazi. I had never noticed the syllabic emphasis before, but Philologos points out that even in contemporary Israel the emphasis falls on the penultimate syllable as if the singers all spoke Ashkenazi Hebrew. (The pronunciation and syllabic emphasis of Sephardi Hebrew is the way Hebrew is spoken in Israeli society today.)
To solve the four problems he identifies, Philologos proposes these solutions, all of which he convincingly argues will fit the existing melody just fine (though he doesn’t go into whether they would fit into the existing Arabic lyrics, which seems to be a glaring omission):

For reasons that aren’t unclear, when he unveils his complete revised version of the second stanza at the end of the column, he has made on additional change. In the current version “lihiyot am chofshi be’artzeinu” (“To be a free people in our land”) replaces the original line, “lashuv le’eretz avoteinu” (“To return to the land of our fathers.”) Philologos restores avoteinu from the original so that (including the original and the current with strikethroughs) he ends up with:

So replace yehudi with yisra’eli — fine. But the rest of his suggestions leave something to be desired. The situation doesn’t call for a of generic recognition of Arab Israelis and Jewish Israelis. To rewrite this song so that each word is equally appropriate for both groups leaves both dissatisfied, exactly the problem that Philologos worries about when he talks about “accommodating the feelings of Arabs by trampling on the feelings of Jews.” Instead, revise to song so that it recognizes the two peoples on equal footing.
For example, tziyon doesn’t have to get the boot entirely. But why not acknowledge both Arab and Jewish terms for the land? “Tziyon veQuds,” maybe? (I have no idea if that makes any sense, nor do I have a strong sense of all of the implications of Quds for all parties is, but you see my point.)
Philologos suggests that one virtue of restoring the line about David is that “David, after all, belongs to Christian and Muslim traditions too.” Indeed, but he does not belong to the Christian and Muslim imaginations the way he does to the Jewish imagination. Further, he is the first Jew to conquer the city of Jerusalem. If he is to be the only individual to make an appearance in the song, perhaps he’s not the best choice. However, what if the song cited Jerusalem as the city where David encamped and the city to which Mohamed journeyed or the city where he ascended?
Perhaps these suggestions — Philologos’ and mine — are flights of fancy, but every proposed improvement to the situation in Israel and Palestine sounds fanciful these days. My truest, loftiest hope for Israel’s national anthem is even more fanciful: Do away with it altogether, this Jewish song, with it’s European tune, pronounced in a dead accent no one truly speaks in anymore. Get an Israeli song, something that recognizes the distinct and different yearnings of these two peoples, something with a mix of Hebrew and Arabic lyrics (or at least teach everyone both versions, like the Canadians).