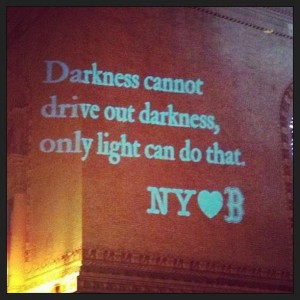 On Exile and Peoplehood

Two and a half months ago, I moved from Boston to New York.

I had lived in Boston for 33 of my 35 years, but I had always wanted to live in New York, and the time was right. When speaking with friends after the move, the refrain was the same. “I don’t miss it. I was ready to go.” I’ve missed my friends but not my city.

And then bombs went off at the Boston marathon.

It’s hard to overstate the role of the marathon in the life of the city. The state takes a holiday. (The entire state, not just the city, as Boston does on Evacuation Day.) People flood into the city from around the world. And rather than run the other way, as Bostonians tend to do when confronted with tourists, instead we line the entire route of the marathon so we can cheer: for our friends, for our visitors, and for our city.

I work in a relatively small office, and three of us have moved to NY from Boston in the last three years. So when one of the others interrupted a meeting I was having to say, “Have you heard about Boston?” I had no expectation that those words would bring bad news.

Nothing is worse than being the direct victim of violence. But being far away from those you love, not knowing what’s going on, and seeing only a stream of “I’m okay!” and “here’s what we think is happening” and especially “here are the ways we can all help” flood my Twitter and Facebook feeds does a number on you.

Last night, I was looking at Twitter on my way home and saw a friend in Boston had shared a picture from Brooklyn of BAM lit up with messages of support for Boston. In a moment of synchronicity, I happened to be getting out of a cab in front of BAM at that moment, so I walked around the building to see the display for myself. There was a small crowd of people taking pictures and offering comfort to each other.

A blogger with some handheld video device approached me and asked if I would be interviewed on camera. I figure bloggers should help each other out, so I agreed. He asked how I was feeling on that day, and I shared that I was a recent Boston transplant so the day was difficult, but thank God as far as I knew everyone in my life was safe. He then started down the path of comparing what happened to daily life in Syria. I cut him off and said something about how I knew that today alone in Iran the fatalities outnumbered anything in Boston, and that people all over the world were suffering, and it was important for us to remember that too. And then I got myself out of the conversation because I didn’t want to become a pawn in some kind of project of comparative suffering.

Over the course of the last two months, I’ve been participating in the Shalom Hartman Institute’s iEngage program, which offers a text-based approach to discussing the State of Israel through the perspective of Jewish values. (I now work for the Institute, so in this course, I am both participating and learning about one of our own programs.) Rather than dealing with fact sheets or calls to activism, iEngage challenges us to grapple with ideas like “what are the Jewish values around power and powerlessness,” and “what does a Jewish conception of democracy look like,” and “what exactly is Jewish peoplehood?” We study texts ancient and modern, guided by the Institute’s scholars and in chevruta with our colleagues.

The particular cohort for my iEngage group is Jewish social justice professionals, with a mix of folks from the lefty spectrum, including staff members from New Israel Fund, T’ruah, Keshet, Jewish Community Relations Councils, etc. In our discussions of Jewish peoplehood, some of the participants bristled at the concept, feeling like it was ancient chauvinism morphed into some kind of Zionist guilt-trip. For me, a sense of Jewish peoplehood has always been more about a deep-felt connection to people around the world and throughout history, most of whom I’ve never met and many of whom I’m sure I wouldn’t like very much if I did. The idea that we look out for our own first (but not only) and worry about those with whom we share a connection more than those from whom we are disconnected has never felt chauvinistic to me. It feels human.

And until yesterday, I never realized how much I feel that same connection to the people of my home town. And when the (certainly well-intentioned but misguided) blogger outside of BAM implied that my concern for my fellow Bostonians was somehow misplaced in light of suffering in the rest of the world, it came together for me, and I got angry. I am capable of complex thought and multilayered emotion. I can grieve for Boston without belittling Syria, Iran, or anywhere else in the world where people suffer. I can be a member of the Jewish people while also being a citizen of the world. I can be a New Yorker and be a Bostonian. And how dare anyone imply otherwise.

4 thoughts on “On Exile and Peoplehood”