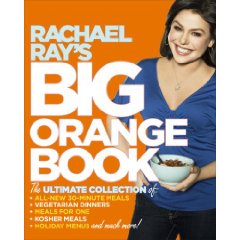 …you want to see a real pop-culture breakthrough for the Jewish people?
Rachael Ray’s latest cookbook has a chapter of Kosher recipes. Not only that, but this is one of the features advertised on the front cover of the book and on the interior cover flaps. 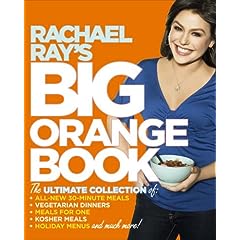 Now, I know Rachael Ray’s not for everyone. I’m a fan from way back, before she went off the cutesy-pie deep end with her Yumm-o aesthetic. And I’ll admit, the Big Orange Book is a little hard to read as every recipe is dripping with her cloying baby-talk jargon. But if you can see past the EVOO! and the gratuitous celebrity name-dropping, the recipes are great. And even though only one chapter is advertised as kosher, there’s also a vegetarian chapter, and lots of great recipes in the other sections that are either already kosher or easily adaptable. And her holiday chapter even includes a Pesach menu!
Okay, I know, this isn’t world-changing or life-altering news. And some of her kosher tips make me want to vomit (eg, “Make sure you use kosher chicken sausage and not the kind that comes in pork casing!”) but she’s made the effort because we’ve made the effort. Ray reports that she gets bundles of mail from readers and viewers asking for kosher adaptations of her recipes, and this is her way of responding and thanking a loyal segment of her audience.
So, thank you Rachael Ray, and I look forward to a super-duper Shabbat and a yumm-o Pesach!
PS – Apparently, the mutual love affair between the Yids and the Yumm-o exists online as well. RachaelRay.com lists this Favorite Hanukkah Recipes article as one of the top five viewed on the site.