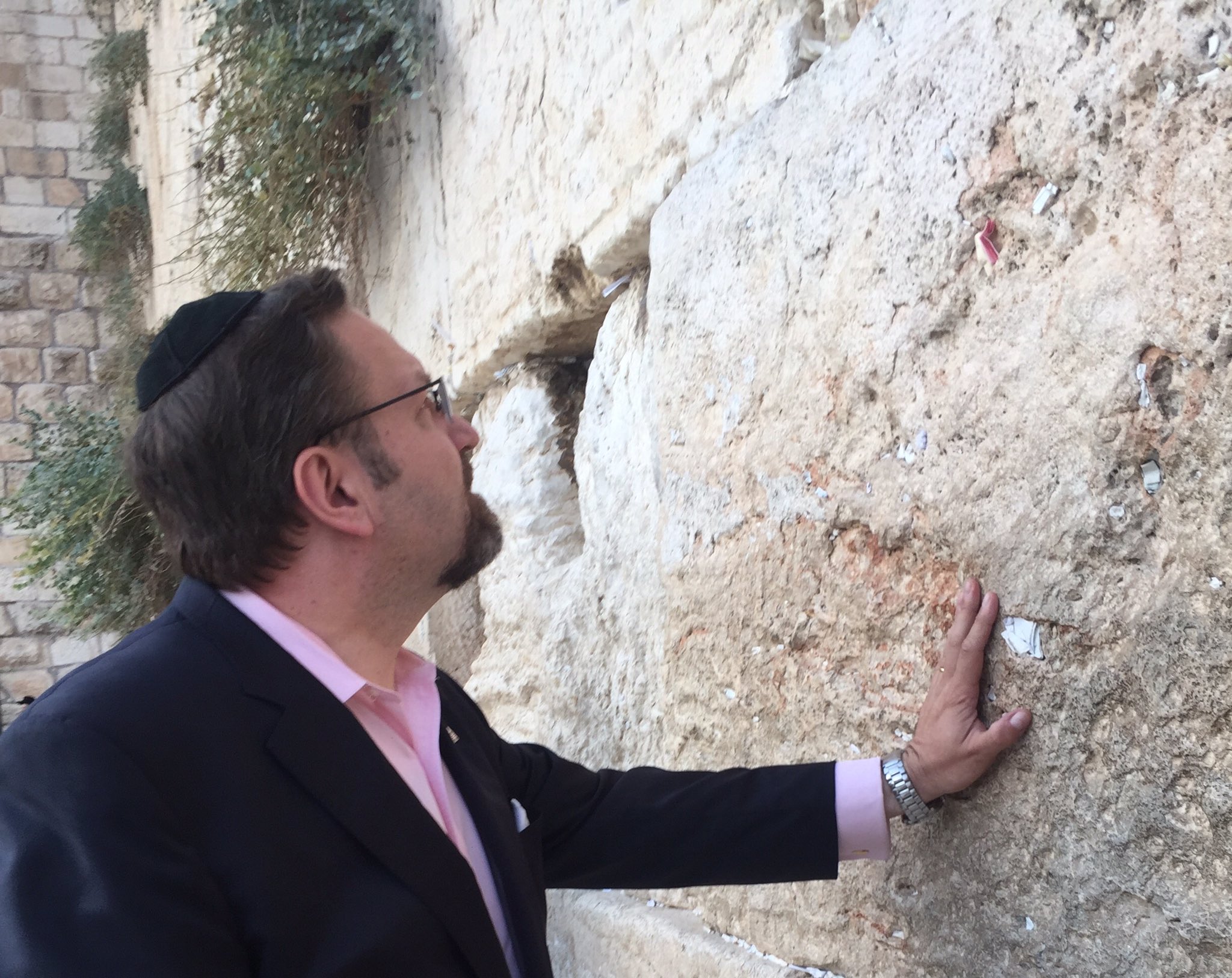 Former White House adviser Seb Gorka was in Israel yesterday to address a conference on counterterrorism held by the Interdisciplinary Center, the national security think tank in Herzliya. Gorka struck an uncharacteristically moderate tone, declaring that the U.S. is not at war with Islam, which would be nice were it true. And while that subject in itself is one worth exploring, the headline here is SEB FUCKING GORKA WAS IN FUCKING ISRAEL.

I drove @SebGorka to Israel's #WesternWall in #Jerusalem yesterday. I spent hours talking to him. He is a true friend of Israel & the Jews. pic.twitter.com/xq0vHaDdDS

As you gaze upon this image of a rank bigot defiling the holiest shrine in the Jewish religion and Israeli officials falling all over themselves to provide him a hechsher, let us recall:
Despite running a campaign fueled by ugly racist rhetoric and bolstered by a burgeoning white supremacist movement, Benjamin Netanyahu has granted Donald Trump his imprimatur and come to his defense every step of the way through his administration thus far.
Despite soaring antisemitic vandalism and hundreds of American Jewish institutions receiving bomb threats (which we later discovered originated in Israel but not yet to what end), Netanyahu and his cabinet remained silent. When Nazis rallied in Virginia proclaiming “Jews will not replace us,” it took Netanyahu three days to respond with a toothless tweet and no official follow-up. Making clear his reasoning, Netanyahu’s Minister of Communications told us that we should ignore Nazis for the sake of good relations with the Trump administration, with Minister of Education and Diaspora Affairs Naftali Bennett adding that Israel cannot be expected to protect diaspora Jewry at the expense of its own interests.
The silence is unyielding. Even when, last week, Benjamin Netanyahu’s own son shared an antisemitic meme depicting his father’s opponents and received glowing praise from American neo-Nazis for his subversion, the self-declared “global leader of the Jewish people,” who never misses an opportunity to exploit the ever-imminent threat of antisemitism, has remained mum.

So then this happened: The new banner on the Daily Stormer.

(I'm not including a link to the odious website, but I assure you, it's real) pic.twitter.com/THUBWcEzls

Should we be surprised then that Israel, the refuge-state of the Jewish people, would welcome Seb Gorka, a man forced out of his administration position for his numerous associations with Hungarian Nazis, but not come to the aid of American Jews during an unprecedented surge in antisemitism the government Gorka served helped to stoke?
Increasingly, it seems, Israelis hate who we love and love who we hate. Not only do most Israelis prefer Trump to Obama (who American Jews overwhelmingly supported in 2008 and 2012), most of those who participated in the 2016 U.S. election voted for Trump believing he would scuttle the Iran nuclear agreement allow Israel to do as it pleases to the Palestinian people. Indeed, Israeli officials were downright giddy at the prospects, with Bennett declaring that “the era of Palestinian statehood is over.”
Some Israeli officials have even been cozying up with European far-rightists with whom they are increasingly finding common cause in making a common enemy out of Muslims. Strikingly, Israel will now allow white supremacists and Holocaust deniers into the country, but it will not permit U.S. rabbis who oppose the occupation.
And while Nazis and their coddlers get the red carpet treatment at the kotel, American Jews get the shaft, with Netanyahu reneging on his promise of an egaltarian prayer space and our female rabbinical students getting strip searched to make sure they’re not smuggling any verboten Jewish literature. Is it any wonder the former Sephardic chief rabbi of Israel, Shlomo Amar, comfortably declared last week that Reform Jews (ie., the vast majority of liberal American Jewry) are worse than Holocaust deniers? In the eyes of the State of Israel, this is abundantly clear.

Leftist Jews, whether in the US or Israel, are the biggest threat to Israel and, ultimately, to themselves.

We’ve been told over and over that it is antisemitic to compare the government of Israel to Nazis, no matter how brutal their actions at times may be. But apparently it’s okay for the government of Israel to be in league with them.
For decades we have given Israel unqualified and unconditional support, even in the face of actions that have gravely disturbed us. However, it is clearer now than ever that Israel does not support American Jews in either word or deed – the relationship is unidirectional.
When Israel is threatened, American Jews open their wallets and pick up their pens and telephones, racing to Israel’s aid. On average, American Jews donate roughly $2B to Israel each year, in addition to the $3B per year Israel receives in American foreign aid secured by the lobbying efforts of American Jews. To put this in perspective, there are more than 40 countries with smaller GDPs than what we give Israel each year.
Likewise, when Israel suffers a tragedy, whether in war or natural disaster, American Jews flock to volunteer and spend their money to support the Israeli people economically. Yet when American Jews literally find themselves under water, Israel is virtually absent. When Superstorm Sandy wiped out Jewish communities in New York and New Jersey, leaving hundreds of families devastated, IsraAid dispatched all of a dozen people to help clean up the mess. And now that untold numbers of Jews in Florida and Texas are in need, the country for whom our cash never ceases to flow was only willing to cough up a paltry million, which they’re milking for every ounce of hasbara value.
Jewish people have put their faith in Israel as they would a messiah – they believe that it is the savior of the Jewish people. They expect that any time Jews are in harm’s way there will be another Entebbe raid or Operation Magic Carpet. Anyone who is watching what is happening today in Israel and still believes that is a freier. We have been used and now that we are no longer useful we are being discarded.