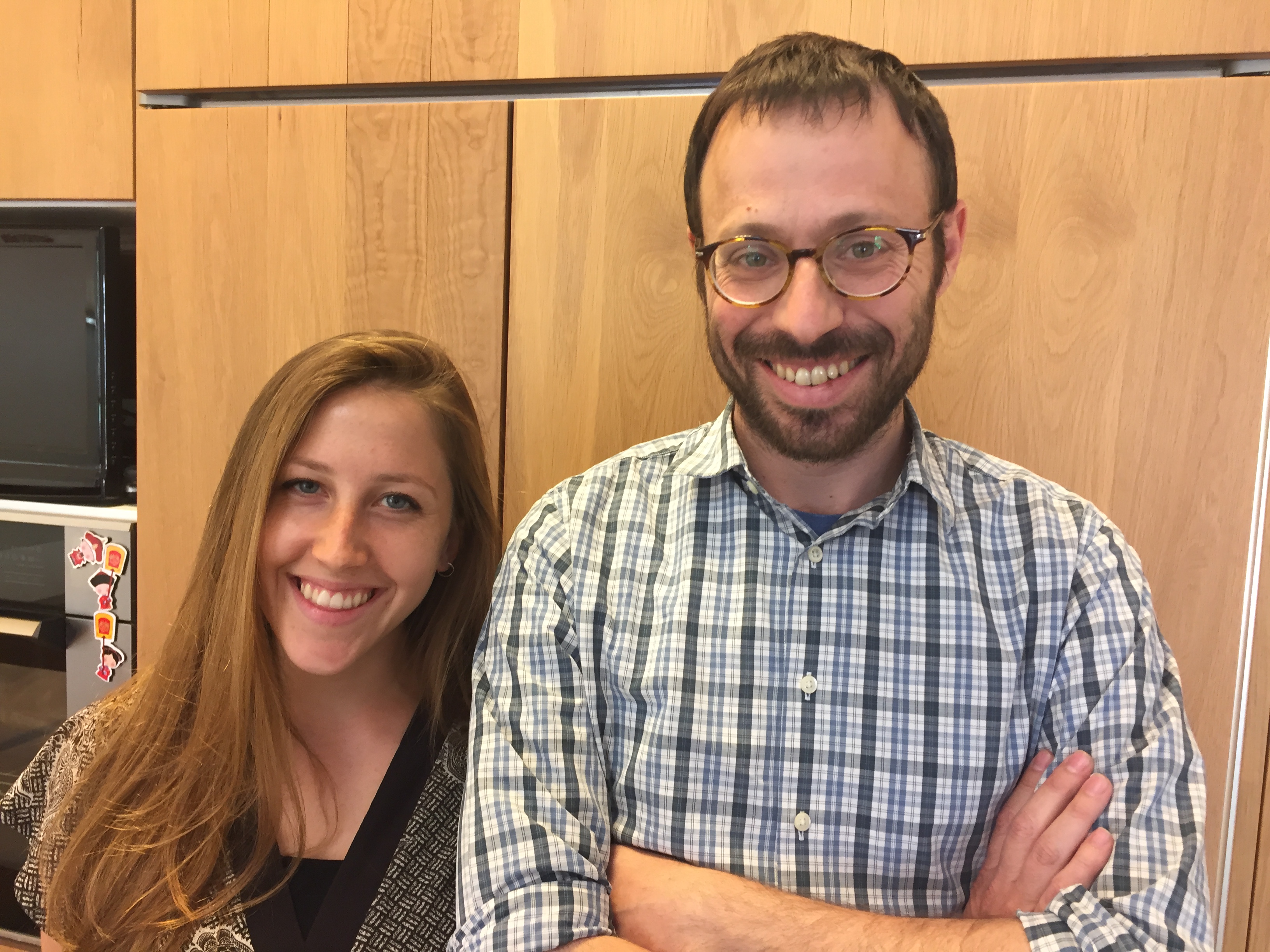 October 23, 2017May 4, 2018 by Grace Gleason
This posting is from a series of profiles of Israeli peace activists by the American Jewish Peace Archive, based on interviews about the relationship between American Jewish and Israeli peace activism. Photo: Grace Gleason and Hillel Ben Sasson in Jerusalem on June 1, 2017.
In the past several months, the US has seen a wave of progressive victories in local elections from New York to Jackson, Mississippi. At a time when many people are for the first time pouring their energy into building local electoral power in the US, Dr. Hillel Ben Sasson is devoting himself to a similar model of building a progressive political base from the ground up in Israel through the Academy for Liberal Israel, a leadership institute he founded in 2016. Ben Sasson has also dedicated much of his recent academic research to the relationship between Israel, the Diaspora and Jewish identity, and currently serves as a visiting professor in Israel Studies at the Jewish Theological Seminary in New York. In his June 1, 2017 interview with AJPA in Jerusalem, [pullquote align=left] Ben Sasson spoke about the misconceptions and identity politics that impact the ability of progressive Israeli and Diaspora Jews to effectively collaborate in their activism.
[/pullquote] To frame this problem of a lack of progressive alliances between the two groups, Ben Sasson expressed frustration about the power that many American Jews wield in Israel without being connected to efforts on the ground. He emphasized how American Jews “construct an image of Israel” that we can fit into our own identity, neglecting to interact with Israelis, politics, or truths that don’t match our image. He personally believes that there is a tendency of both rightwing and leftwing American Jews to see Israel not as a polity but as a place to express our personal values. “You think this is your moral Disneyland,” he said.
For progressive American Jews in particular, “the issue of the occupation is primarily a moral one. It touches on their self-identity as a group that carries certain national values or certain moral values.” Ben Sasson claims that the way this moral outrage is expressed is often not strategic, and its intention is mostly symbolic. He believes American activists could be more effective if we made politically calculated decisions about where to invest our resources with respect to Israel-Palestine, both through supporting efforts on the ground as well as seeking to influence U.S. policy. His advice: “Recalibrate your financial support. If your support now is going to expressive politics and value-oriented human rights-oriented initiatives, start donating to political initiatives in Israel that help build the Israeli [progressive] political camp.” I would add that Americans might also apply Ben Sasson’s advice in donating to politically savvy Palestinian or binational initiatives. Additionally, it is possible that many American Jewish activists are already taking strategic action and simply disagree with Ben Sasson about what is strategic.
[pullquote align=left] Ben Sasson’s counsel is deeply grounded in his belief that grassroots political organizing and “slow, diligent, calculated institution-building” is what is most needed in order to end the occupation.
[/pullquote] Ben Sasson has researched – primarily under the auspices the leftwing think tank Molad, where he worked for two years as program director – the rise of the Religious Zionist movement in Israel over the past 20 years, in order to write a blueprint for a similar political takeover from the left. His current work in developing a leadership institute aims to build political power for Israeli progressives and effect change from within.
Between 2005 and 2017, Ben Sasson explained, the Religious Zionists “have managed to become the most dominant voice within Jewish Israel.” How did they manage to do it? “[They] built institutions, invested in political education and training, created a cohesive identity, ideology, and agenda and promote all of these simultaneously, and they were constant.” One example of the ways the Religious Zionists promoted this identity and ideology was through camps and youth movements, which was a “calculated action.” They would “take over a camp, or forge the identity of the camp, and then diligently, slowly build institutions that enabled them to take over critical power junctures within the state apparatus,” he explained. “Like the Tea Party has done in the Republican Party.” Now, says Ben Sasson, the left in Israel – and all around the world, including the U.S. – must do the same.
[pullquote] The problem, Ben Sasson explained, is not that there are not enough liberal voters. Rather, it’s that “they are not organized as a political camp.”
[/pullquote] “They do not have institutions that promote their power and their agenda in the public sphere.” Moreover, some formerly leftist institutions that the “have become depoliticized for various reasons. They are [more] like do-gooders than a political-agenda-promoting movement.” This is because “the political class of this camp…works in NGOs, rather than in politics….And they are trying to cater to the needs of their funders and their international interlocutors rather than convince the Israeli public to vote for leadership.”
As Ben Sasson hinted, there are many echoes of American politics as well as a general populist rightward swerve in both North America and Europe in his description of the current political situation in Israel. We can test his thesis to ask if, in America, Trumpism is not a sudden breaking forth or uprising, but rather the result of calculated, slow political institution building by the Right over the course of years. And now, progressives must take on the same diligent process through local politics and grassroots organizing, as well as think about how we might re-politicize institutions that have become “like do-gooders,” challenging the paradigm of “apolitical” nonprofits, and bringing leadership from that sector into the political and specifically electoral sphere. At the same time, in our desire to end the occupation, we might heed Ben Sasson’s advice and question the extent to which our donations or actions are sacrificing political efficacy in the pursuit of identity expression.

Previous postings in the series:
Sarai Aharoni on Feminism and Peace Activism in Israel and the Diaspora
Anat Sargusti on Women Wage Peace