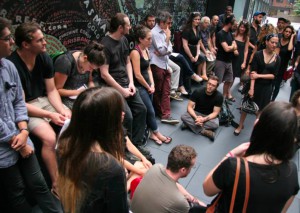 If Not Now: A Personal Political Reflection

This is a guest post by Becky Havivi, a Brooklyn-based community-builder and activist. This is not written on behalf of or in the name of If Not Now.
On the Friday night before Tisha B’Av, traditionally the saddest day in the Jewish calendar, 300 American Jews joined together in Washington Square Park to mourn the deaths of over 1500 Palestinians and Israelis in the most recent armed conflict in the region. This was the fourth public event over a period of two weeks organized by If Not Now, a new movement that emerged in response to the latest crisis in Israel/Palestine, the sense of urgency growing as violence escalated, and the sense of disconnection from what mainstream Jewish institutions were expressing.

In this charged moment overflowing with noise, If Not Now has managed to effectively strike the right chord, as evidenced by the large numbers of young Jews that have turned out to actions and events over the last few weeks, in New York City and in cities across the country. If Not Now has successfully given voice and media attention to liberal young American Jews, a constituency who, for the most part, feels alienated by the conversations happening in broader Jewish institutional arenas.
Though I helped plan the program for If Not Now’s Shabbat service and rally, my own involvement in the group was not a no-brainer. As an engaged and connected American Jew I have struggled to find my footing and stake a claim within the broader Israel/Palestine discourse that has felt authentic to the rest of my progressive lefty values. The articles I see posted on my Facebook newsfeed and the arguments that I hear repeatedly spouted on both sides make me want to flee. And for a pretty long time I have done just that.
Until my professional path forced me to directly confront my relationship with Israel, I hadn’t really reexamined my relationship to Israel since my late teenage years. Though I was deeply connected to Jewish community, culture, and ritual, when conversation turned to Israel, I tuned out. And I didn’t really feel that tuning out was problematic. As my politics moved further and further to the left, I knew that I could no longer stand by the simplistic and jingoistic Zionism I’d been raised on. Yet, I felt mildly threatened and definitely disconnected from the common rhetoric in many progressive circles demonizing Israel. It was easier to just stay out of it altogether.
However, because my Jewish identity is so central to nearly every facet of my life, at some point, a critical investigation of my relationship to Israel became unavoidable. While it might be easier to see my connection to Judaism and Israel as separate – one a religion, a way of life, a set of values, and more; and the other a nation-state many miles away, of which I am not a citizen and do not reside – I don’t believe that that option is available to me. As a Jew, I feel implicated in the actions of the Israeli government, not in small part because the Israeli prime minister has explicitly asked for Israel to be recognized as a Jewish state and declared that the state acts on behalf of Jews worldwide. As such, whether I like it or not, I have inherited a responsibility to reconcile the Jewish value of pursuing justice and the state of Israel’s current actions, which fall short of that ideal.
Here’s where If Not Now, comes back in. If Not Now does not have an extensive set of policies or even guidelines about where they stand on various issues– that’s not their goal. And it’s also part of what has made their strong mobilization of supporters possible. The closest you’ll find to an expression of their stance and position is their open “Letter to the Conference of Presidents”. These few sentences taken directly from that letter are at the core of what I have personally found to be so compelling about this movement.
“Our own history of oppression has taught us that our freedom cannot be achieved absent the freedom of our neighbors. As we were dehumanized by the oppression we faced, we are now dehumanized by the oppression we are inflicting. The military campaign of recent weeks offers a brutal reminder that Jewish liberation cannot and will not be complete so long as Palestinians are not also free.”
The notion that dehumanization cuts both ways, and as such strips away the basic humanness of both the oppressed and the oppressor is more nuanced than much of the rhetoric I hear on all sides. By noting this broader truth about oppression and honoring the specific history of Jewish oppression, the unique voice that If Not Now brings to the conversation is lifted out of the polarized us-them; oppressed-oppressor dichotomy that I have found to be frustrating in its lack of sophistication. It’s not an either-or, where you must chose either to stand with Israel or to point fingers and boycott Israel. As a progressive American Jew, neither of these options account for the complexity that I feel and the multiple identities that I hold. I am compelled by a movement that has room to acknowledge both the traumatic history of Jewish oppression, and also holds that our liberation as a Jewish people is incomplete, so long as Israel continues to curtail Palestinians’ freedom. This is the ideal of justice that my Judaism calls us toward.
On that Friday night, nearly two weeks ago, it felt powerful and moving to express that complexity publicly with other Jews, dressed in black to express our sorrow. Grounded in rituals that emerge from within our tradition – Shabbat to gather as a community and reciting the Mourner’s Kaddish to mark so many deaths – we showed up in our robust identities, as Jews against the occupation to say, Enough.
For a more comprehensive account of If Not Now’s place within the current conversation in the American Jewish community, see this recently published article.

3 thoughts on “If Not Now: A Personal Political Reflection”