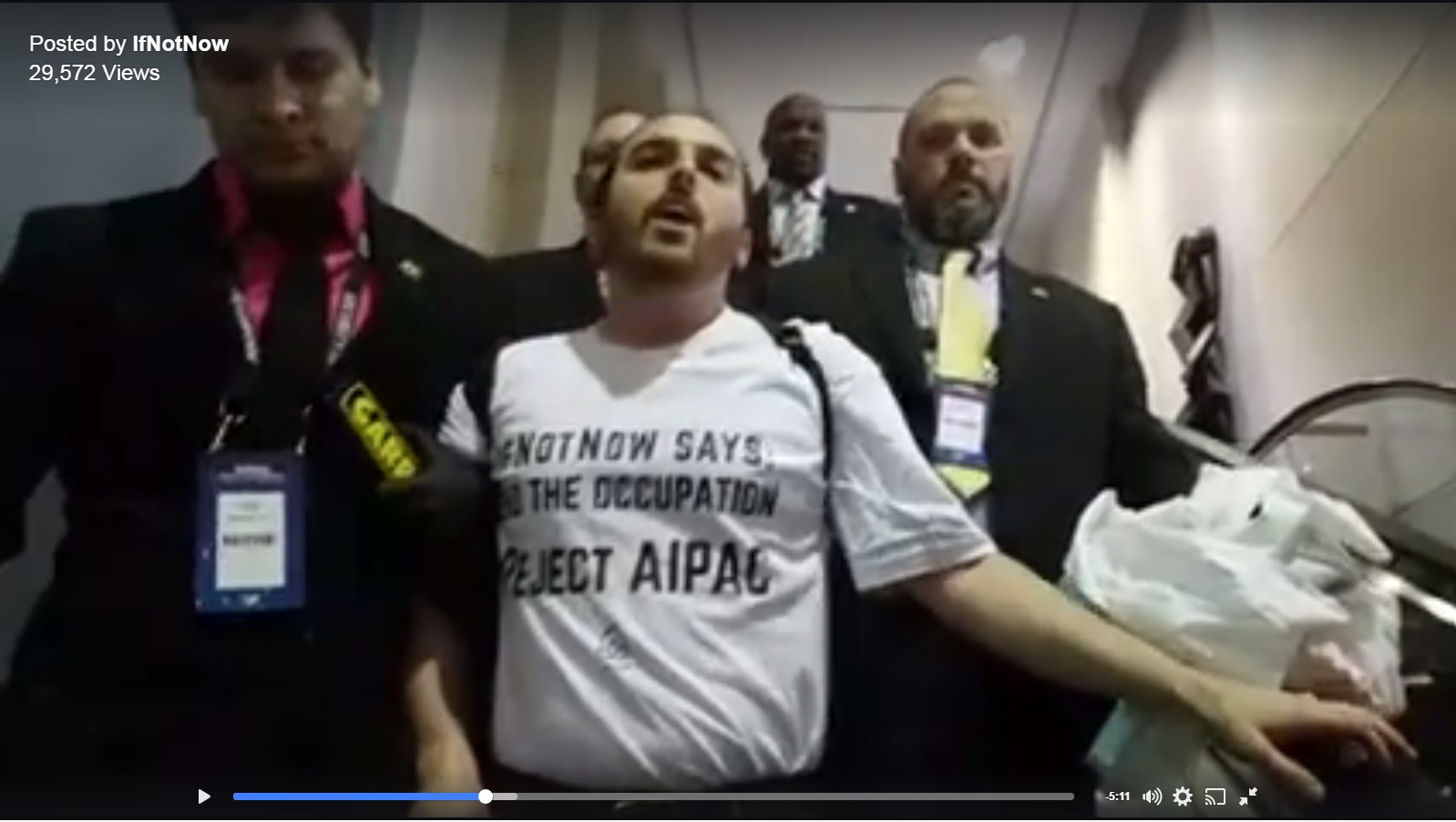 IfNotNow Thrown Out of AIPAC Conference — and Breaks Down Cliches

Parenting is full of cliches. You don’t sleep as much. You want your kids to do better than you have done. You hope they don’t make the same mistakes you did, or at least if they do, they learn from them more than you did. And the time goes by so fast.
Sadly, protesting against the Occupation — and the Occupation itself — is filled with cliches too. Having attended anti-AIPAC protests for close to 20 years, I’ve seen many of them. Jewish protesters unwilling to truly challenge the establishment or, if they do, leaving their Judaism far behind when they do. “Pro-Palestine” activists who veer from challenging the Occupation to much more problematic accusations. Earnestness and minute policy details replacing creativity, and a consistent absence of a true Jewish youth energy.
As one of the older attendees at the IfNotNow “Resist AIPAC” protest on March 26, I happily watched many of the parenting cliches come true and the protest cliches start to fall, with my 10 and 12 year-olds beside me, hopeful that they will take inspiration from these activists. Hopeful that all of us will.
IfNotNow has been at the forefront of the “Jewish Resistance” for many months, focused on taking their message directly to the American Jewish establishment and, where necessary, to getting arrested during a Senate hearing.

As someone who attends the actions but is not active behind the scenes, as I have been in other movements in the past, I appreciate joining and feeling the impact of their work — they focus on being clear, direct, and unapologetic. They do not bury themselves in policy positions but rather spend their energy on creating new ways to connect us to the same issue many previous generations have struggled to overcome: why the Occupation is not only a tragedy for the occupied, but how it damages the soul of the occupiers and those who support them as well.  That is why I take my young sons with me — because they can feel that these protests are not cliches but that they really mean something.
In the past, anti-AIPAC protests in DC featured one cliche after another. Lengthy speeches or endless diatribes, or both, and always from outside of the convention itself. Defiantly outside, and largely uninterested in the fact that those inside would pay them no mind anyway.
But IfNotNow’s protest today did not settle for those cliches, especially not for being outside. They began the day with a gathering at a park several blocks away, then made their way to the convention itself. Rather than remain outside with a range of pro-Palestine groups, they found their way in.
They unfurled large banners and recited Rabbi Hillel’s famous words from which they derive the organization’s name. They sang ‘Lo Yisa Goy” with new meaning as they were brought out by security. They barricaded themselves to the doors.

IfNotNow demanded to be paid attention to, and because they represent a growing segment of the young American Jewish population, that attention will be paid to them more and more, even if it’s rarely admitted in the open by the establishment.
And as such, they broke so many of those old cliches. Like any parent hopes for, I will say that they are doing better than many of us did in the past.
They are doing better than we did before because they are clear — the Occupation is destroying Palestine and Israel, and as young American Jews, they feel it destroying their connection to Israel, even to Judaism. They make clear that we are all connected to and responsible for the Occupation, even when we are not the soldier standing at a checkpoint or the settler in the outpost.
They do not shy away from saying to those inside the AIPAC Convention, to Ambassador David Friedman and his allies, and to those in the American Jewish community who allow themselves to be represented by this kind of leadership that all of them, too, are responsible for the past 50 years of Occupation and every minute more to come.

And they are not afraid of channeling their youth to be creative or even a bit hokey along the way if it makes the point. As my boys and I arrived today, we saw a number of activists waving blue strips of paper back and forth, then eventually moving apart, representing the parting of the Red Sea and a hope that, finally, we can end the Occupation of Palestine and ourselves be free. Not what I would have done, but, I suppose, that’s exactly the point.
My lasting image of the day will be my boys walking directly behind a large banner reading “Freedom & Dignity for All.” That is where I want my boys to be standing in 10, 20, 50 years. To be fighting for that principle and to do it better than I have done. To stand up and say it directly to those in power, whether in their synagogue, their community, or their Congress. Whether that’s to fight the Occupation (which hopefully will have ended peacefully, somehow) or something else.
IfNotNow is breaking down the cliches of the past of what it means to fight the Occupation, and they give me hope that my boys will have a real movement to join in the future, one that can make the change that so many before have failed to bring.
Not only an end to the Occupation but to the most damaging cliche of all: that American Jews must stand behind whatever the Israeli government does. Slowly, thanks to the way IfNotNow is breaking down the cliches of what it means to protest as — what it means to be — a young Jew, my boys are truly starting to understand that.