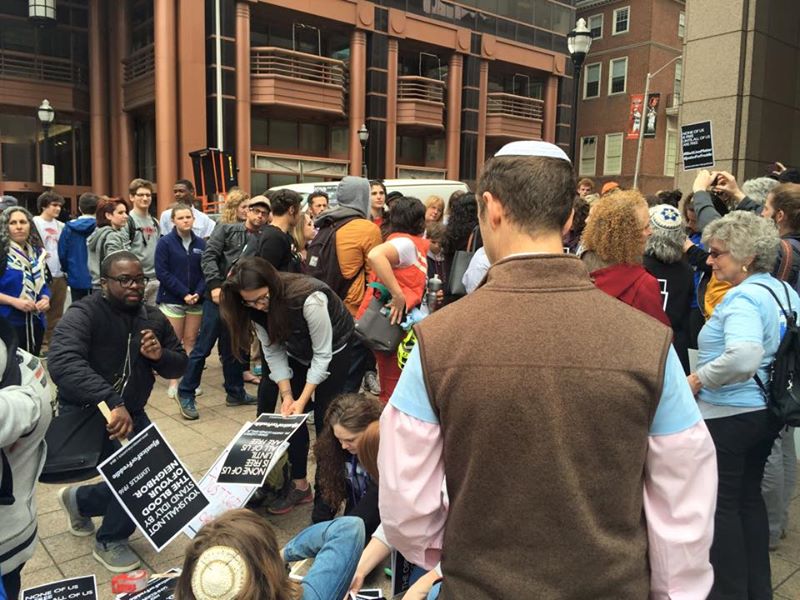 Incongruous – A Rabbi Marches with Baltimore

This past Monday I participated in a march in downtown Baltimore that was organized in part by Jews United for Justice. JUFJ is a Washington D.C. based organization whose core mission is to “lead Washington-area Jews to act on our shared Jewish values by pursuing justice and equality in our local community.”
To this end they gathered together between fifteen and twenty local area rabbis along with a number of lay people to join together in a march for justice for Freddie Gray. The reason why it felt a little incongruous is because the State’s Attorney Marilyn Mosby had just that morning handed out charges against six police officers.
[pullquote align=left] I marched because I wanted to show that we in the suburbs care about what is going on in Baltimore City.
[/pullquote]Now as an aside, I am a huge supporter of the men and women who risk their lives every day to keep us safe. I am greatly saddened at the death of any one of them especially in the line of duty like Office Brian Moore who died recently as a result of being shot while questioning a man in Queens.
We have members of our congregation and other community members who wonder each and every day whether or not their loved one will return to them safe and sound. And I have the utmost respect for them and the dangerous work they do.


Thus I was uncomfortable with elements of the march that condemned the police. Yet I am not so naive as to think that there are not serious tensions and problems between the police and the minority communities they serve. Police work for us, the citizenry. They are public employees. They answer to local politicians, who ultimately should bear the responsibility for how laws are enforced. This is not simply an issue between police and poor, young African-Americans, it really is an issue of how Baltimore and Maryland have chosen to go to battle with the residents of communities like Sandtown.
So we together marched. Black and white, Jew, Christian, Muslim, atheist and the like.
Yet we all marched for different reasons. Some were continuing to demand justice for Freddie Gray while others wanted to keep the pressure on our civic leaders. As listed below are a few of the ones as to why I chose to march.
I marched because I wanted to show that we in the suburbs care about what is going on in Baltimore City. We may live worlds apart, but our destinies are bound tightly together.
I marched because so many people expressed fear of going downtown. Baltimore is the locus of our area. It is the central repository of cuisine and culture. And if I am not afraid to march there, maybe others will be encouraged to return and shop and dine and explore the wonders that Baltimore City has to offer.
[pullquote align=left] I could not, as it teaches in Leviticus in Parashat Kedoshim, “stand idly by while my neighbor bleeds.”
[/pullquote]I marched because the loss of one life is in Jewish tradition as if we have lost the entire world. Freddie Gray was no saint. That is abundantly clear. Yet, according to most accounts, he should not have been arrested, and he certainly should not have suffered life ending injuries while in police custody. His death is a wake-up call, and I for one, was listening.
I marched because so many others were unable be it because of physical limitations or work or family commitments.
I marched because Jews and African-Americans were once partners in a common cause. There was a time we marched hand-in-hand against segregation. Sadly now our conversations seem to be mostly about who has suffered more rather than what we can do together.
I marched because Baltimore has a history of segregation and Antisemitism that it still has not fully dealt with as you can read about in this fascinating book: Not in My Backyard.
[pullquote align=right] My fear is that when the cameras leave, we will return to business as normal.
[/pullquote]I marched because I needed to. There were many who were supportive of this. There were some who were and are distressed by my actions, and there are even some who view it as an act of betrayal. Yet in good conscience, I could not, as it teaches in Leviticus in Parashat Kedoshim, “stand idly by while my neighbor bleeds.”
I am not foolish enough to think that our actions will change this great city of ours. But maybe it will serve as a reminder that there is so much potential here in Baltimore, but there is also a lot of work that needs to be done. As long as we live in a place where there continues to be rampant poverty, violence, hopelessness and despair, our work is not done. My prayer is that Freddie Gray is the last to die as an act of injustice, but my fear is that he will not be. My fear is that when the cameras leave, we will return to business as normal.
Only if we continue to hold our elected officials accountable. Only if we continue to work in communal efforts like those affiliated with Baltimoreans United in Leadership Development (BUILD) or through the Industrial Areas Foundation (IAF) which we at Har Sinai Congregation are exploring partnering with, will there be hope for a better tomorrow even as we clean up the destruction from yesterday.

2 thoughts on “Incongruous – A Rabbi Marches with Baltimore”