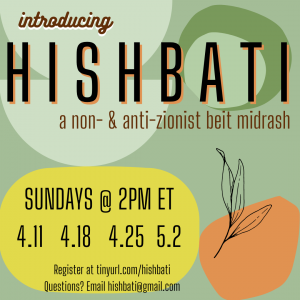 Hishbati is a new non- and anti-Zionist Beit Midrash. We provide a space for Jews to learn and teach Torah without the assumption that Zionism is inherently Jewish, or even a good idea. By being open about our hashkafah we hope to address big questions without assumed answers.

All teachers at Hishbati identify as non-Zionist, anti- Zionist, diasporist,or as somewhere on that spectrum, with the full knowledge that those words mean different things to different people. All participants, regardless of ideology and identification, are welcome.

What is Non-Zionism? What is Anti-Zionism?

Broadly, anti-Zionism opposes the existence of a Jewish state. Non- Zionism (and, specifically, Jewish non-Zionism) contains two pillars: (1) true ambivalence on the question of whether or not Jewish state should exist, and (2) opposition to conflating Judaism and Zionism.

Hishbati is a reference to a verse which appears three times in Shir HaShirim. “הִשְׁבַּ֨עְתִּי אֶתְכֶ֜ם בְּנ֤וֹת יְרוּשָׁלִַ֙ם֙ בִּצְבָא֔וֹת א֖וֹ בְּאַיְל֣וֹת הַשָּׂדֶ֑ה אִם־תָּעִ֧ירוּ וְֽאִם־תְּעֽוֹרְר֛וּ אֶת־הָאַהֲבָ֖ה עַ֥ד שֶׁתֶּחְפָּֽץ”. The verse is famously explicated in Tractate Ketubot 111a to refer to three oaths that God made certain peoples swear swear in reference to the people of Israel moving to the Land of Israel. The first oath is that the people of Israel are not to move to the Land of Israel “as a wall” (bichomah). Rashi understands this to mean they will not move to Israel collectively with a strong hand (i.e. with force). Historically, this verse and its accompanying Talmud passage has provided the basis for religious anti-Zionism.

But there’s a second rationale for Hishbati’s name as well. The word hishbati is a hiphil, or causative-active verb. It does not describe the action of the oath-maker, but of someone requiring the oath-maker to swear an oath. (For example, it is what a bailiff does when they tell a witness to raise the witness’ right hand and swear to tell the truth.) In the context of the verse in Shir HaShirim, the speaker is requiring the daughters of Jerusalem to make a vow. Within our own context, Jewish educators, teachers of Torah are also forced to make a vow: to foreswear antizionism. It is a litmus test so often demanded throughout non-Hareidi American Jewish institutions. Most Hillels, synagogues, youth groups, summer camps, Federations and more will not allow explicitly anti-Zionist speakers. Synagogues hold panels discussing Zionism and claim that they represent the full spectrum of American Jewish positions, when all they have are right-wing Zionists, left-wing Zionists and centrist Zionists. Those panels are missing voices: the voices that reject Zionism. The irony, of course, is that anti-Zionism has long and deep Jewish roots. But those roots are ignored and discounted due to Zionist fears.

The context of the three oaths statement in Tractate Ketubot is particularly resonant.  It starts with Rabbi Zeira withdrawing (קמשתמיט) from Rabbi Yehuda, afraid to tell his teacher of his plans to move to the Land of Israel. Rabbi Yehuda believes that all Jews are forbidden from moving to the land if Israel; Rabbi Zeira only believes that only returning to the land with force is forbidden.

As I recruited teachers for the inaugural series of Hishbati shiurim, I heard Rabbi Zeira’s fear over and over again. “I reject Zionism, and would love to teach in this Beit Midrash, but how will that impact my employment?” “Will JTS fire me if I teach at Hishbati?” “After rabbinical school I might want a job at a Hillel, and they’ll never hire me if I publicly identify as non- or anti-Zionist” “I’ll never be invited to teach at Hadar again!” “I’m afraid that the Jewish education organization that I lead will lose funders.”

4/11 Raphael Magarik teaching “What House Would You Build Me?: Skepticism Toward the Temple in Biblical Thought

All shiurim are at 2 PM ET.

One thought on “Introducing Hishbati: A Non- and Anti- Zionist Beit Midrash”