Iraqis in Pajamas: the Healing Power and New Language of Punk and Judaism

“Rock ’n’ roll may be most of all a language that, it declares, can say anything: divine all truths, reveal all mysteries, and escape all restrictions.”

Noted rock critic and historian Greil Marcus wrote those words in his book The History of Rock N Roll in 10 Songs. But they also get to the central core of what Loolwa Khazoom is creating through her band Iraqis in Pajamas: a new dialect of that language for expressing pain, ecstasy, and spirituality all through the entangled webs of punk rock and Jewish spirituality.

There is much to learn about Loolwa, who is an accomplished writer, healer, and speaker as well as musician. In a recent conversation in advance of new music from Iraqis in Pajamas (more about the name here), we focused on her music and her process of transformation over time through punk rock and how she finds healing through rhythm, volume, and lyrics that pull together from across her personal experience and the experiences of marginalized peoples everywhere.

Loolwa grew up in an Iraqi Jewish household, where she became deeply connected to classical music (attending a musical conservatory by the age of 8), Judaism, and the traditions of her Mizrahi community. It was also a household suffering from violence and fear, which were traumas she only connected to in their true depth later but began speaking out against as early as age 11. As Loolwa reminds us in the notes to her song “Conformity,” estimates say between 15%-25% of Jewish households, similar to the rate of other communities, experience domestic violence, yet it remains a rarely discussed issue in the community.

In her teens, a friend made her a mixtape of music that took Loolwa to an entirely new depth and set of emotions, which was soon followed by a transformation both externally— black clothes, spiked hair, etc— and internally that lasted years. Interestingly, that mixtape did not feature artists that immediately stand out as “punk.” Instead, they included new wave 80s bands like Depeche Mode and The Cure. But they began to speak to Loolwa in that new language, one that told her she could escape the violence and pain not by continuing to suppress it all but instead by truly feeling the energy of darkness and despair and embracing the process of letting that energy wash through her.

Eventually, she came to punk, something she says she never intended to do. But as she battled suicidal thoughts, she realized that she needed to go through what she calls “a spiritual suicide and rebirth,” making a radical commitment to doing whatever it would take – no matter how extreme, off the wall, or outside the constructs of social conditioning – to be authentic and truly alive, and therefore, healthy and happy. That decision led her to seek outlets for raw anger and powerful energy, as well as confrontation. Not violent confrontation, but as she explained, the kind of confrontation that propelled her to more or less walk up to yoga teachers, women’s book store clerks, and therapists, and say, “Hi, I’m f’ed up, can you help me?”

It is the kind of confrontation that leads her to open a song about trying to connect at a new synagogue with a declaration that sounds like it could be coming from Beth Ditto or the late Poly Stryene. Loolwa repeats “I wanted the cohesion of community, but the price was conformity,” with a volume and tone that quickly moves from resignation and acceptance to defiance, with a simultaneous level of confidence and uncertainty. 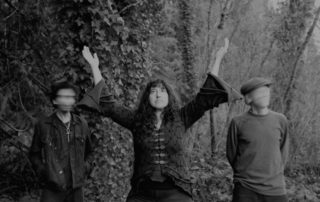 She finds healing in the new language and energy of her music but remains deeply connected to Judaism, preserving Shabbat as a holy time, now for reading, journalling, and artistic creation. Article writing can be painful, she finds, but songwriting is nourishing. Loolwa begins with lyrics, then develops a melody, and finally seeks to find a way to connect the emerging song to a prayer or other element of Iraqi Jewish tradition, which her music consistently, if subconsciously, helps to educate the Ashkenazi listener about.

These Jewish elements can be direct and powerful but woven in, as in new track “Cancer is My Engine,” where, after she opens up about her journey through challenging both our conceptualization of cancer and the limiting approaches of our medical system, she invokes “Adonai Hu Elohim,” or “Adonai is God,” reminding the listener— and herself — of the power of the tradition and faith (you can buy and download the song here on Bandcamp). They can be more overt, such as with “Mahalnu,” rooted in the Iraqi traditions around repentance and forgiveness during the Yomim Noraim between Rosh Hashanah and Yom Kippur. Loolwa begins by pushing us to think about the balance between forgiveness and forgetting, screaming “What is the difference between forgiveness of you and erasure of me,” then transitioning to the traditional sounds and words of the season. Finally, they can also be surprising, such as her self-described “best break-up song” that weaves in with words from the Song of Solomon, the Jewish tradition’s most compelling text of love and sensuality.

Through it all, though, it is the rhythms of her tradition and soul that drive the music forward and keep you attuned to what comes next. For example, while the lyrics and vocals in “Mahalnu” may be the initial element that captures a Jewish listener’s attention, the song itself is rooted in the groove and propulsion of the bass line. Rhythm is the under-appreciated element of so much of Jewish music, but for Iraqis in Pajamas, it is the connective tissue between the traditions Loolwa is starting from and the loud and brash punk sounds she wants, or demands, you to feel.

In Marcus’ book, he quotes music historian and collector Dick Spottswood, “One thing that old blues records teach you, is that even people with very limited skills can play very personal, distinctive, and appealing music that has nothing to do with the extent of their technique. It was their artistry. It was their feeling.”

Loolwa has skills that seem much more limitless rather than limited, but she, too, is driven to create personal and distinctive music that captures you with its artistry and feeling. Even if there are the occasional moments that don’t quite work (and, really, what in punk ever works all the time?), she and her band are developing another dialect of the new language of rock and roll, one that is distinctly Jewish but most clearly her own and that draws you back for repeated listens.

If you are looking for a new direction in your spiritual or musical journey, especially if there is a feeling of healing anger underneath it, it may be time to wake up and connect with Iraqis in Pajamas.