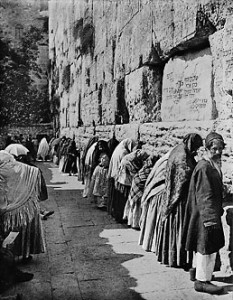 Is the Western Wall a Synagogue?

Below is an article (tshuvah) by Rabbi David Golinkin of the Schechter Institute in Jerusalem–the seminary that trains Masorti (Conservative) rabbis in Israel. I don’t agree with all of his conclusions (namely, he seems to imply but not state outright that Women of the Wall shouldn’t fight for equal rights to pray at the lower plaza of the Kotel (Western Wall), and I believe strongly that they should indeed continue doing so), but anywhichway there’s some interesting stuff for discussion here.

Question: Since the arrest of Nofrat Frenkel in November 2009 for wearing a tallit and trying to read the Torah at the Kotel, there has been much discussion of the Women at the Wall and the right of women to wear a talit in the women’s section at the Kotel.1 There has not been enough discussion, however, of a much greater problem: In recent years, the Rabbi of the Kotel has expanded the synagogue section of the Kotel plaza and the Kotel Guard now patrol the entire Kotel plaza. They have posted large signs warning people to dress modestly. They tell people how to dress and what to wear, they tell women and girls not to sing, they separate girls from boys and they tell Christians to remove the crosses from their necks. The result is that non-Orthodox Jews have begun to avoid the Kotel entirely and many military ceremonies have been moved to other locations. Indeed, a recent poll (December 23, 2009) shows that 90% of Israelis want less gender-separation at the Kotel.2
Therefore, please answer the following questions:
I) Was the area near the Kotel considered a synagogue before 1948 and did it have a mehitzah?
II) Why is the Ministry of Religion in charge of the entire Kotel plaza?
III) What is the halakhic status, as opposed to the legal status, of the Kotel Plaza; is it really a synagogue?
IV) How should the State of Israel deal with the fact that the entire Kotel plaza is slowly but surely becoming a Haredi synagogue?

8 thoughts on “Is the Western Wall a Synagogue?”