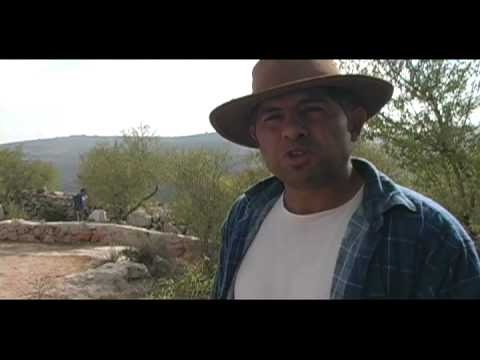 Daoud Nasser is one of my heroes. His family owns a plot on top of a hill between the village of Nahalin and the illegal settlement of Neve Daniel. When you enter the land, there is a stone which reads “We Refuse to Be Enemies.” I’ve been there many times, and I know few other Palestinian families who encourage visiting Jewish groups (I’ve visited the Nasser’s most often with Encounter) to sing and pray, and who take such joy from the expression of all faiths in their home.
From Mondoweiss:

Their story is a both typical and unique. The land has been in the family’s hands since the Ottoman times, but beginning in the early 1990s, the Israeli military has sought to confiscate the property. Undaunted, the Nassar family have developed their land and established the ‘Tent of Nations‘ project, whose activities include “educating local children from the refugee camps about rural Palestine, hosting young people for camps and activities such as open-air theatre, and acting as a forum for internationals and Palestinians to get to know each other”. The Nassars have also grown strong links with international supporters, including in Germany, the USA and UK.

Daoud sent out the following e-mail on Thursday:

Today at 2.00 pm in the afternoon, 2 officers form the Israeli Civil Administration guarded by Israeli soldiers came to our farm and gave us NINE demolishing orders for nine ( structures) we built in the last years without a building permit from the Israeli Military Authority. The demolishing orders are for: tents, animals shelters, metal roof in front of both old houses, the restrooms (Shelters) , a water cistern, a metal container and 2 underground renovated cave structures. One officer was writing the demolishing orders and the other was taking pictures with two cameras, Israeli soldiers were following them everywhere and pointing their guns on us.

The demolishing orders were written in Hebrew and I refused to sign receiving them. We have 3 days only to react against those demolishing orders. The timing for delivering the demolishing orders was plant properly and purposely on Thursday, in order to make it difficult for us to try to stop those orders by the Israeli court within 3 days, because of the Jewish weekend (Friday and Saturday). The idea is to make it impossible for us to act quickly. I contacted our Lawyer and he will write an opposition and send it to the military court on Sunday morning. We hope to get a paper from the court through our Lawyer on Sunday morning to stop the demolishing orders.
We would like to ask you to be prepared and alert for actions, if anything might happen. We will keep you updated and will guide you for actions but please forward this E-mail to your friends.
PLEASE be prepared for actions… Thank you for all your solidarity and support.
They are trying to destroy our spirit, but we are determined to resist and overcome the Evil with GOOD and justice will prevail.
Blessings and Salaam,
Daoud
[email protected]

12 thoughts on “Israel Threatens (another) Palestinian Advocate of Non-Violence”