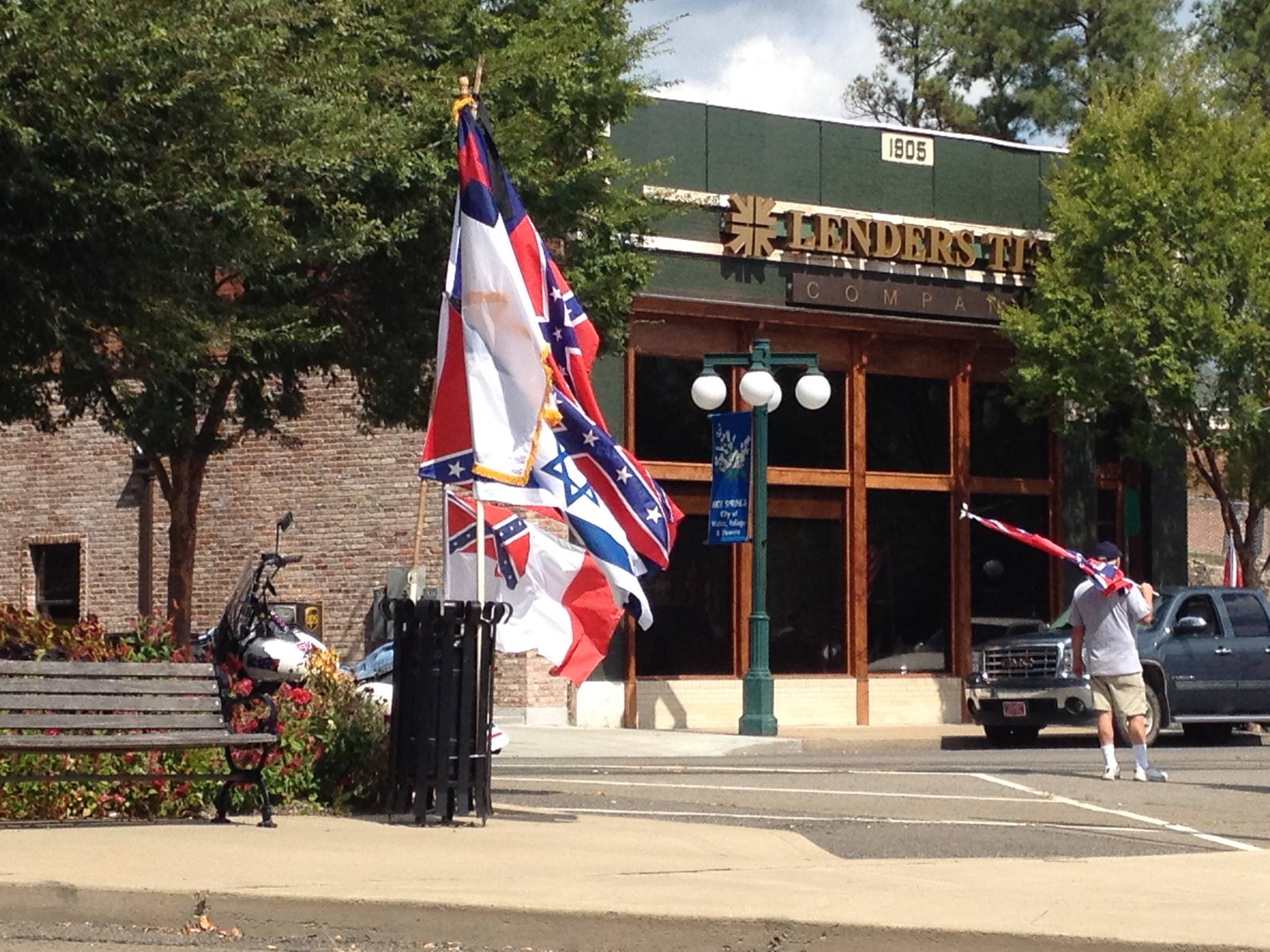 [Editor’s note: check below for another incongruous spotting of Confederate and Israeli flags flying together. Got sightings of your own? Email them to [email protected]]
In the aftermath of the Charleston, South Carolina massacre, debate about the Confederate flag has been raging. Opponents of the flag hope that these murders, committed in order to provoke a “race war,” will demonstrate that the flag is not merely a relic commemorating Southern history, but in fact a destructive symbol of white supremacy that should disappear from our public sphere. Supporters of it appear to have buckled down, taking to the streets, social media, and elsewhere to defend their flag against what they call political-correctness or thought police.
[pullquote align=right] These Confederate flag proponents were displaying an Israeli flag.
[/pullquote]So it was no huge surprise, as I drove down the street in downtown Hot Springs, Arkansas, that a few of these supporters had gathered for a rally. I looked out my window and saw four or five people display ten or so large Confederate flags.
But then something caught my eye. One of the flags was different from the others. Not red and blue, this one was in fact blue and white. I strained to see what it was. As it turns out, these Confederate flag proponents were displaying – amidst their stars and bars – an Israeli flag.
Almost immediately, I sorted through an array of emotions. First, I felt sheer revulsion. I am an unabashed opponent of the Confederate flag. Preserving it does not, as some suggest, merely preserve Southern heritage. The reason for that is that the Confederacy was not merely an expression of Southern pride. It was an expression of Southern white pride, and the reason for the flag’s existence was as part of an effort to maintain one of the most horrible institutions in human history – slavery. The flag, like slavery, belongs in the past. Not in our present or future.


Seeing a star of David alongside a Confederate flag, therefore, was pretty jarring. The magein david (shield of David – often referred to as the star of David) did not originate as a Jewish symbol. The hexagram has a long history in both mathematics and religion outside of Judaism. But it has over time become associated with our religion and its adherents. Many of us wear this symbol around our necks as a way to feel a connection to Judaism on our person at all times. For Jews and others, its display at any event signifies some sort of connection between it (the event) and Judaism. I shudder at the idea that my Jewish identity would tie in to the horrible elements of the past that the Confederate flag has come to represent.
Next my mind wandered away from my revulsion and settled on confusion. Why group these two emblems? What is to be gained? What political viewpoints are being progressed?
[pullquote align=right] As I did so, my mind flashed to the recent GOP debate.
[/pullquote]I did my best to determine their thinking. As I did so, my mind flashed to the recent GOP debate. In that debate, candidate after candidate voiced their unabashed support for the state of Israel (Ann Coulter had some particularly well-publicized and controversial thoughts on this subject). On top of their comments that night, however, many have expressed support for the hawkish administration of Benjamin Netanyahu and opposition to the Iran deal. They have advocated to move the US embassy in Israel from Tel Aviv to Jerusalem, and denied the existence of the Palestinian people. They do not merely support the existence of Israel or a strong US-Israel relationship. They desire the same kind of Israel that their Right-of-center and right-wing counterparts in K’nesset envision.
That’s when I shifted from confusion to contemplation. I realized that, for many people, the two flags really do belong together. While I have grown up feeling almost entirely positive associations when I see a Jewish star, for many that star at the center of the Israeli flag feels just as oppressive as the stars and bars of the Confederacy. For Palestinians living under occupation, it would be difficult to feel any other way.
[pullquote align=left] I desperately want my Jewish symbols to stand for good.
[/pullquote]I am hoping now to move on from this contemplation to the next step: action. I desperately want my Jewish symbols to stand for good. I want the magein david to stand so unambiguously for justice that any juxtaposition of it with the Confederate flag would be written off as sheer lunacy. I wish I could say, with all sincerity, that we are living in a world where that is the case. But we are not. If the state whose flag bears the Jewish star, Israel, fails to take serious steps to treat all under its control with dignity and respect, rallies like this one may become commonplace.
On Rosh Hashanah morning, I heard a series of blasts from the Shofar, rousing me from a spiritual slumber and calling me to enter a new year with intention and resolve. But this rally, a few days later, was the most important wake-up call yet. What I heard, loud and clear, is that we have to prove this rally wrong. We have to take steps towards a reality where oppression cannot in any reasonable sense be linked to our Judaism and its symbols. This new year, we have some important work to do.
Editor’s note: Below is another instance of oddly juxtaposed Israeli and Confederate flags, spotted in Jerusalem on Agripas Street in summer 2014.