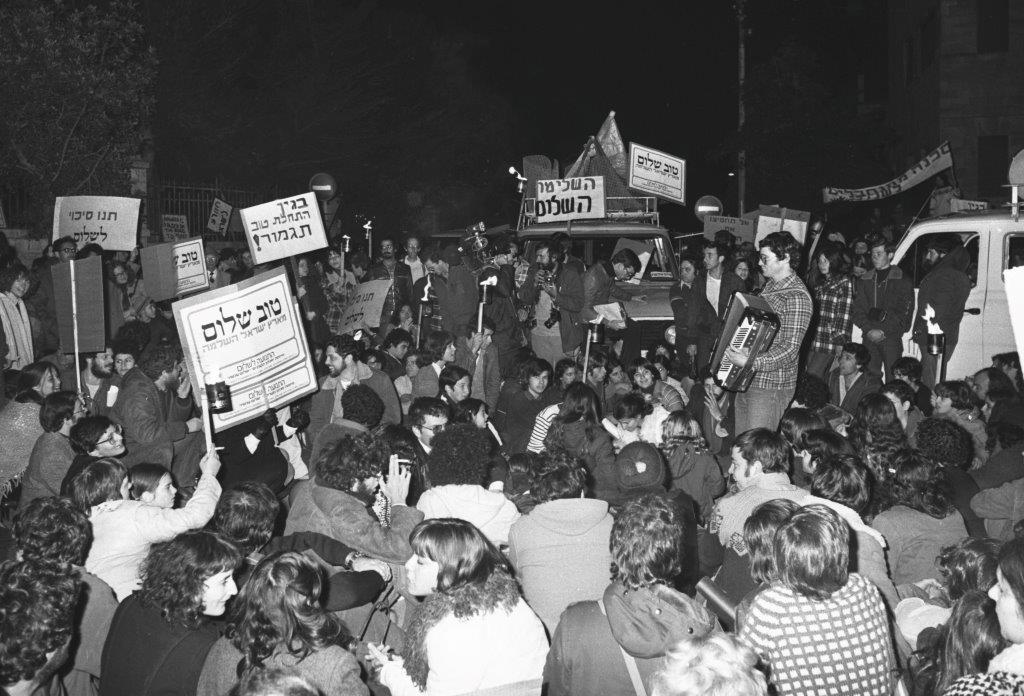 Israelis Rising Up: Remembering with Yuli Tamir and Janet Aviad

This piece was originally posted by the American Jewish Peace Archive.
Though many Jews over 50 may remember the excitement of the massive Israeli anti-war mobilizations organized by Shalom Achshav (Peace Now) in the late 1970s and 80s in Israel, I was surprised to learn about this history. I first learned about Shalom Achshav protests and the extent of their power in Israeli society and politics — calling for an end to the occupation, Israeli accountability in the first Lebanon War, and for their government to seek peace with neighboring nations — through interviews for the American Jewish Peace Archive conducted with Shalom Achshav founder Yuli Tamir and longtime leader Janet Aviad.
Yuli Tamir, one of the founders of Shalom Achshav and a former member of Knesset and Minister of Education, recalled the movement’s initial seeds. She and a group of friends, young veterans of the 1973 Yom Kippur War had lost many of their peers in a war in which over 2600 Israelis and over 10,000 Egyptian and allies were killed. They “felt deserted” by the old guard political leaders for not averting the war. Fueled by their anger and grief, they began to organize, and, in April of 1978, sent a letter to Prime Minister Menachem Begin.
The letter states: “We have doubts about the policy of a government which prefers settlements beyond the Green Line to terminating the historic conflict, and establishing normal relations with the countries in our region.” They reminded Begin that “real security can be achieved only when we achieve peace” and urged him to “choose the way of peace.”
Tamir, an intelligence officer in the 1973 War, helped write the initial draft, and was one of the only women among 348 reserve army officer and combat soldier signers of what became known as “The Officers Letter.” To her, the main message was that they “would not like to be involved in another war unless you will be absolutely sure that every attempt for peace would be exhausted.”


The release of the letter was timed to create public pressure on Prime Minister Begin to re-engage in peace talks with Egyptian president Anwar Sadat, because he had begun to hedge on moving forward towards an agreement. The letter was then reissued as a public petition garnering 200,000 signers and spurring a series of grassroots mobilizations demanding the government keep negotiations moving forward. Tamir explained: “the support in the street also produced a support in the parliament … when there is a public mood for peace you can get big moves going.”
After the Camp David Agreement was concluded in November, 1978, activist and writer Amos Oz was told by PM Begin that he was haunted by signs held at a Shalom Achshav rally in Kings of Israel Square (now Rabin Square) in the heart of Tel Aviv, where 100,000 demonstrators had gathered while the Camp David discussions were going on. The signs said “if you don’t come back with a peace agreement, don’t come back!”
The work of Shalom Achshav paved the way for the 1978 Camp David Accords and the 1979 Egypt-Israel peace treaty, in which Israel agreed to return the Sinai Peninsula captured in the 1967 War and which has maintained peace between the two countries to this day.
Tamir noted that while Shalom Achshav was volunteer-run at the time, donations from Diaspora Jews (including those in the U.S.) funded the expenses of organizing the large scale demonstrations that spurred on the peace process. Diaspora Jews have continued to have a role in supporting Shalom Achshav since, including through Americans for Peace Now, a US branch of the organization founded in 1981.
During the First Lebanon War, Shalom Achshav gained power and increasing acceptance. Janet Aviad, another early Shalom Achshav leader, recalled that the turning point of the movement’s growth and traction followed the horrific massacres of Palestinians in the Israeli-controlled Sabra and Shatila refugee camps by Phalangist militia in September 1982. In response, Shalom Achshav organized a mass protest in Tel Aviv, demanding that the government set up an inquiry commission on the role of Israel in enabling this massacre. The protest was attended by 400,000 Israelis, approximately 10% of the country’s population at the time.
The march led to the appointment of an investigative commission, which charged the government with war crimes and called for the resignation of then-Defense Minister Ariel Sharon. Initially, Sharon was reluctant to resign, and PM Begin did not fire him. So, Shalom Achshav held a another march in Jerusalem calling for his immediate resignation. Tragically, at this march, a rightwing extremist threw a grenade into the crowd, and killed young activist Emil Grunzweig and seriously injured ten others, one of them being Avrum Burg (who later became an MK for Labor, Speaker of the Knesset and Chairman of the Jewish Agency, the son of Minister Yosef Burg from the National Religious Party). Pressure from this tragedy caused Sharon to be removed as Defense Minister, though he maintained a post as a minister without portfolio.
Aviad is convinced that Shalom Achshav’s strategy of regular public demonstrations was influential in shifting Israeli public opinion. “[During] the Lebanon War,” Aviad explained, “we started at 20 percent objecting and we finished up with 60 [or] 70 percent objecting. When we did the big demonstration of Sabra and Shatila we had the majority of Israelis. And that was the whole summer that we demonstrated.”
In Israel today, with the left wing struggling to build power, the continual expansion of settlements, and the general rightward turn of public opinion, it is difficult to imagine the vast majority of Israelis protesting war crimes, advocating for diplomacy, or urging the end to construction of new settlements in the West Bank. Similar to the inspiration I’ve drawn from the student movement in the U.S. against the Vietnam War in the late 1960s and early 70s, learning about the early history of Shalom Achshav brought me hope as an activist. Shalom Achshav started as a grassroots movement, run by young adult volunteers and through their initiative and creativity came to play a major role in building grassroots support for maintaining diplomatic momentum, advocating for government accountability, and gaining widespread acceptance among Israelis for the two-state solution.
The effectiveness of grassroots nonviolent resistance movements has proven true across time and place – in the United States, in South Africa, recently in South Korea and right now in Zimbabwe, and countless other instances, national and local alike – but it is of particular interest to me and I think other young American Jews who feel discouraged that so few Israelis recognize and protest the injustices against Palestinians perpetrated by their own government.
There is a precedent for Israelis rising up and creating change, and perhaps this can give us faith in our own American grassroots movement as well as hope that a leftwing mass movement in Israel was not particular to the moment of the 70s and 80s, but is possible again.
A special thanks to Hillel Schenker for his additional insights on this piece.
This is the sixth in the American Jewish Peace Archive series of profiles of Israeli peace activists, based on interviews about the relationship between American Jewish and Israeli peace activism. Previous pieces are listed below.
Sarai Aharoni on Feminism and Peace Activism in Israel and the Diaspora
Putting out Fires: An Interview with Israeli Human Rights Lawyer Nery Ramati
Anat Saragusti on Women Wage Peace
Hillel Ben Sasson on Progressive Leadership and Jewish Identity in Israel and the Diaspora
Karen Isaacs on her Journey to Achvat Amim (Solidarity of Nations)

One thought on “Israelis Rising Up: Remembering with Yuli Tamir and Janet Aviad”