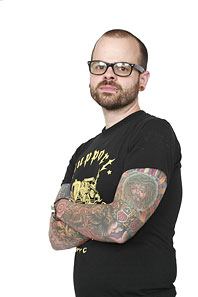 Hallelujah and PTL! The media is excited about Christian hipsters for a change. It seems that Jim and Tammy Faye Baker’s son Jay has hit the Williamsburg hipster scene. Why? Because he loves to tell the story.
As a proud South Carolinian who grew up across Lake Wylie from Jim and Tammy Faye’s house, hanging out with kids who wore Heritage USA tee-shirts, I am thrilled to see a Baker in the news again for doing something other than kicking it in the Castro. Go Jay go! Good luck with the religious press who can’t stand innovators, and the mainstream media who think you’re weird. And oh yeah, get used to being called a hipster. Sigh.
New York‘s interview with Jay Baker is here. He actually sounds like a nice guy.