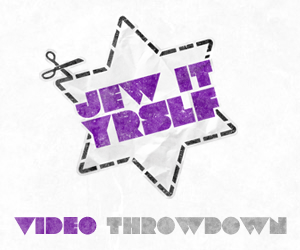 Dan Sieradski, who revolutionizes the Jewish world on just about a weekly basis, has a massive new project planned. It’s called Jew It Yourself, and it’s a great

crowd-sourced Jewish learning opportunity. Eventually, the site’s going to be full of videos of different people — of all Jewish stripes and subdivisions — showing how to do Jewish rituals, both traditional rituals and rituals we make up ourselves.
Eventually, Sieradski plans on having videos for all sorts of Jewish rituals on the site. But he figured the best place to start his work is where it stops — with rituals related to Shabbat.
Here’s the deal:

To enter, make a short video (under 5 minutes long) with “do it yourself” instructions for practicing a Jewish ritual, making a Jewish craft, or cooking Jewish food that is specifically connected to Shabbat, the Jewish Day of Rest.
read the rest

To encourage the world to chip in, JIY is sweetening the deal the old-fashioned way — with bribery. You can win a Flip Ultra HD video camera, a $50 iTunes/Amazon gift certificate, and a bunch of CDs and t-shirts. All of which are valid reasons to enter a contest, but we still say the best reason is the old-fashioned reason, the reason Jews are best at — because you know how to do something better than other people.
Crossposted from MyJewishLearning, of course.

15 thoughts on “Jew It Yourself”