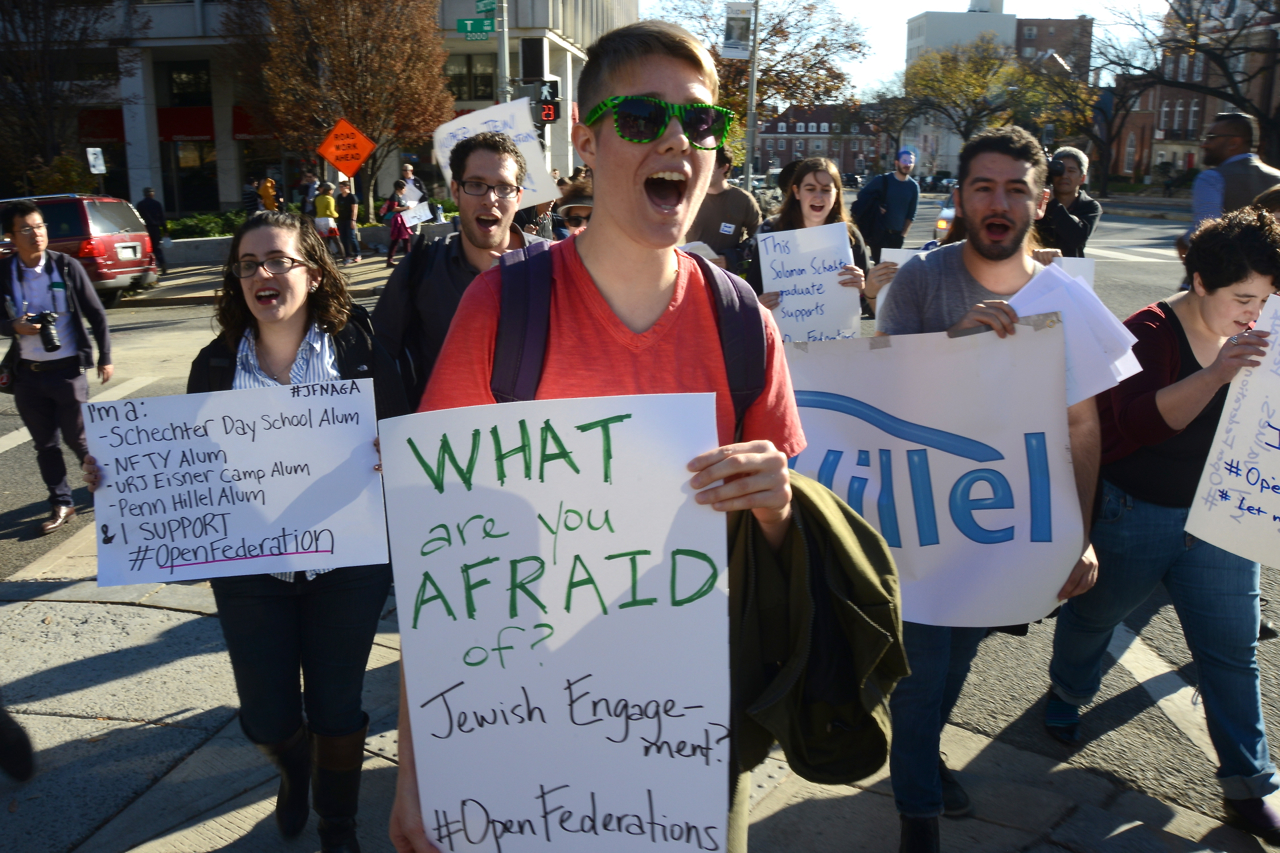 November 11, 2015May 4, 2018 by Open Hillel
[pullquote align=right] Open Hillel and our community allies will continue to push the Jewish Federations to support free speech and pluralism.
[/pullquote]On Sunday, November 8, Jewish students and community members, organized by Open Hillel, gathered to protest the Jewish communal censorship around Israel/Palestine. For too long, Jewish Federations have conditioned their financial support for Hillels, JCCs, synagogues and other community groups on these institutions’ adherence to what large donors have decided is “acceptable” Israel conversation. These Federation-enforced rules serve to drive young Jews away from Jewish communities and to shut down conversations of vital importance. On Sunday, we called upon the Federations to stop conditioning support for Jewish life on adherence to red lines on Israel-Palestine.
In the morning, we met in the DC JCC for a community gathering. Rabbi Alana Suskin, director of strategic communications at Americans for Peace Now, offered Talmudic perspectives on the importance of dissent and debate within the Jewish tradition. Professor Dov Waxman, co-director of Northeastern University’s Middle East Center, discussed the history of exclusion of critical voices from the Jewish communal tent. Seth Morrison, an activist with Jewish Voice for Peace who was previously a Federation lay leader, discussed the structure of the Federations and the ways in which they currently censor open dialogue on Israel-Palestine in Jewish communities. After hearing from these speakers, participants broke into groups for workshops in which we shared our stories and brainstormed about how to work together to urge our Jewish institutions to become more open and inclusive.
In the afternoon, we marched from the DC Jewish Community Center to the Washington Hilton Hotel, where the General Assembly was ongoing. We carried signs indicating our Jewish communal membership (in syanagogues, Hillels, schools, etc.) and our support for Open Federations. On the way over, we chanted “Let my people talk!”, demanding that the Federations support open discourse in Jewish communities. We also chanted “Whom do you represent? Whom do you serve?”, calling attention to the fact that restrictions on discourse are enforced because the Federations prioritize donors’ political views over the American Jewish community writ large. We sang “Not By Might, and Not By Power” by Debbie Friedman because, while we may not have the power of large donors, we have the spirit of knowing that exclusion of dissenting opinions is not Jewish.
[pullquote align=left] Passers-by were friendly and receptive — some urged us to keep up the good work.
[/pullquote]At the rally, several students and other young Jewish organizers spoke to their personal experiences and explained why Jewish communities ought to welcome questions and open discussion on the most difficult issues; include all Jews regardless of political views; and facilitate conversations with other communities. Caroline Morganti, Open Hillel’s Internal Coordinator, read out loud our open letter to the Jewish Federations of North America. In this letter, we called upon the JFNA to, within one month’s time, “State clearly and publicly that both the umbrella organization and all local federations will not condition support for Jewish institutions and organizations on these institutions’ adherence to red lines around Israel, such as Hillel International’s Standards of Partnership.” As Caroline went inside to deliver the demands to Federation leadership, we sang “Hinei Mah Tov U’Manaim,” imagining a Jewish future where Jews of all opinions can sit around a table together and none would be excluded for their political views.
Outside of the Hilton, we spoke to GA attendees and other passers-by about the need for pluralism and open discourse in Jewish communities. Even though the Federations had sent an email to all attendees warning them not to “engage with” protesters, most passers-by were friendly and receptive to our message; some were particularly enthusiastic and urged us to keep up the good work.
[pullquote align=right] Caroline was stopped by security guards and told she could not give out Open Hillel’s demands.
[/pullquote]Inside the hotel, Caroline, who was also a GA attendee, attempted to drop off several copies of Open Hillel’s demands at the reception desk to be delivered to JFNA leadership. However, she was told that the demands would not be taken or delivered. Caroline was then stopped by security guards who told her that she could not give out Open Hillel’s demands inside the building. Caroline also emailed the demands to JFNA leadership; she has yet to receive a response. We were deeply disappointed by the JFNA’s refusal to consider or respond to our request for more open discourse.
Nevertheless, we were extremely heartened by the outpouring of energy and support for Open Federations from participants in the Jewish People’s Assembly, from individuals around the country who sent in messages and pictures of support on twitter, and from the many GA attendees with whom we spoke on Sunday. Open Hillel and our community allies will continue to push the Jewish Federations to support free speech and pluralism in Jewish institutions. The JFNA cannot continue to ignore so many Jewish students and community members. When they ask, yet again, why many young Jews do not associate with Jewish institutions, we would encourage them to take a long hard look at the gathering of predominantly young Jews who protested at the Washington Hilton on Sunday.