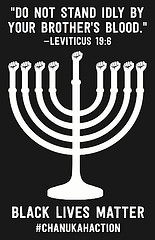 Jews Affirm That #BlackLivesMatter at #ChanukahAction in Brookline, MA

Editor’s Note: This post is the eighth in Jewschool’s series of reflections on Judaism, Jewish identity, race and the events in Ferguson. 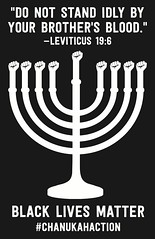 I spent the first night of Chanukah this year at Coolidge Corner in Brookline, MA. This was the Boston-area location for the multi-city #ChanukahAction: A Jewish Day of Action to End Police Violence event. I had a number of anxieties in advance, but it proved to be a powerful evening with moments of hope and inspiration.
My concerns began with a Facebook event wall littered with infighting that I feared would travel offline to the actual event. Could we focus on one issue, and keep the focus away from ourselves? Could we raise awareness in our own community without silencing and ignoring those who have already been marginalized? I had been to a protest organized by Black Lives Matter Boston in November, organized and led by people of color. I recognized why Jews needed to rally around the cause, but it was unclear how. Frankly, could we do this without damaging the larger movement?

I walked over after work and arrived to find a group of people a few blocks south of Coolidge Corner. Many already had signs similar to the graphic from the Facebook event stating “Do not stand idly by your brother’s blood” (in short, the oversimplified “why” mentioned above), and “Black Lives Matter, #ChanukahAction.” The organizers brilliantly asked participants not to bring their own signs, and if they did, to simply state, “White Jews and Jews of Color stand together for Ferguson Action.” This, if nothing else, kept people from bringing inappropriate, off-topic, or offensive signage (e.g. white folks with signs saying “I could be next”).
Candles, songsheets, and other handouts were passed around as we made our way to Coolidge Corner where there was a police force waiting. The crowd that gathered was diverse by a few measures: white Jews, Jews of Color, non-Jews, children, young adults, parents, and the elderly. There were those who were visibly Jewish, wearing tzit-tzit or kippot, and those who were not. In accordance with the theme of “8 Nights, 8 Lives,” several carried larger signs with the faces and names of 8 Black people recently killed, half I was familiar with, half I wasn’t. A handout introduced them, the date they were murdered, and their age at the time. More stories can be read here (as directed by the handout). 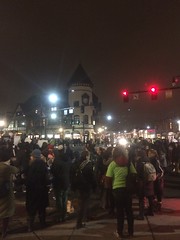 We gathered on one corner and began marching from corner to corner. We lit candles, sang, chanted “Black lives matter” and “8 Nights, 8 Lives.” We yelled the names of those who had lost their life to police brutality. The crowd had critical mass, and it looked as though the police were hoping to have us march in sync with the change crosswalk lights, as not to disrupt traffic too much, but ultimately we formed a loop walking from corner to corner of the square. As we marched money was collected on behalf of Black Lives Matter Boston. The energy felt low, compared with previous protests I’d attended where the anger was tangible. It was as if there was more sadness and guilt than anything else.
What was noteworthy was the location. Brookline strikes me as the exact kind of privileged community where it would be incredibly easy to tune out things like institutional racism and bad news. Instead, anyone commuting through Coolidge Corner by car, train, or foot, would have to take note. When all was said and done, traffic was halted for what I believe was 15 minutes and it was backed up as far as I could see. It might not have been any worse than the usual rush hour traffic, but it brought the message to place where it might not yet have resonated.
We then gathered in the center of the square to say brachot for the Chanukah candles we’d already lit. We then held a four and half minute silence–as requested by his family–memorializing the four and half hours that Michael Brown’s body was left lying in the street. A woman of color (Yavilah McCoy) then led us in song. “We who believe in freedom cannot rest until it comes.” At this point, traffic and the T was permitted to pass through. We then marched to Congregation Kehillath Israel a short walk away. 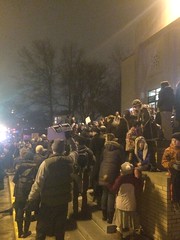 The intention of congregating on the steps was to create a space for youth to speak out. After some framing, I noticed a young black women at the foot of the steps making her way through the crowd, encouraged along by those around her. She made her way to the top of the stairs and took the megaphone. She introduced herself as Atara and told us that she was 17, the only black kid in her school, and that she was orthodox. She immediately reminded us that the dire situation we are in is not new, it’s always been this way. She told us how worried she was about her brothers, her sisters, and her future family. She told us that she will continue to work until we’re able to do something about it. “I don’t want to be worried. I am Jewish and I am Black, that is who I am. I am not going to change.” She reminded us that “we all have responsibility, as Jews, as humans, as god’s creation.” The crowd let out a resounding “yasher koach” and we moved into the Mourner’s Kaddish.
The same woman who led songs earlier then spoke, noting that she would “end with hope” but let us know that we were “not off hook.” Showing up is an important step, but just the first one. She led us in the spiritual “This Little Light of Mine.” We closed with another round of collections for Black Lives Matter Boston, ultimately raising over $1,000. We descended down the steps singing “Oseh Shalom Bimromav” with hopeful but heavy hearts.
To bring the message of racial justice into your Chanukah observance, please see the collection of resources at chanukahaction.org. The most challenging part of this process is learning when to speak and when to listen. Tonight was our turn to speak and we did. When it was the right time to listen, we did. I arrived with trepidation but left with pride. What I feared would be a night of “hey, look at us, we care!” was a night of acknowledging that we are responsible and we have a crucial role to play. In the spirit of Chanukah, may we rededicate our lives to fixing this broken system.