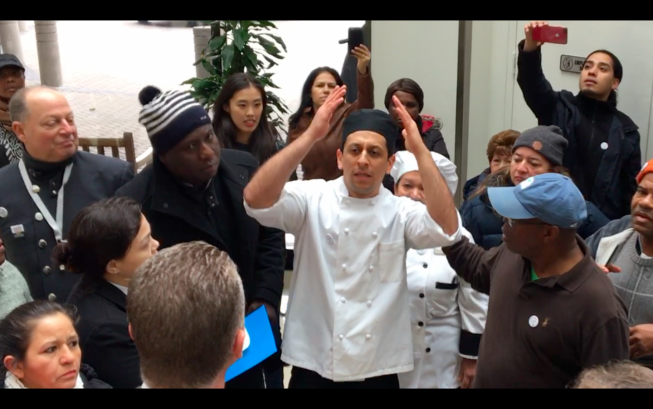 Just Hospitality: First Steps Toward Justice at the Stamford Hilton

“Redemption, we have stated, is identical with communing, or with the revelation of the word, i.e. the emergence of speech. When a people leaves a mute world and enters a world of sound, speech and song, it becomes a redeemed people~ a free people. In other words, a mute life is identical with bondage; a speech endowed life is a free life. ”
— Rabbi Joseph Ber Solveitchik, “Prayer, Redemption and Talmud Torah”
“We are tired of the labor exploitation in this job….I want the union to be heard, to stop being exploited.” —  Irwin Martinez, Cook, Stamford Hilton
How long does it take to clean a room? Imagine working on the clock of a demanding boss, who expects a whole hotel room to be cleaned in 13.7 minutes. Now imagine doing that 34 more times.  That’s the reality of a housekeeper at the Hilton Hotel in Stamford, CT, who clean on average 35 rooms a day, an average of 13.7 minutes a room. In order to finish the work, housekeepers arrive an hour before they clock in to load their carts. Managers yell at them or time them to encourage them to finish the rooms. For that work, they leave with $11/hr and insurance so unaffordable ($230/week for family insurance) many do without or end up in debt to the company to pay for insurance. Banquet servers top pay maxes out at $7.80/hr because “they get tips.”  These are the conditions reported by workers at the Stamford Hilton hotel, a destination of choice for Jewish organizations from NCSY to the Israeli Ministry of Tourism. “They treat us like horses” said Yrvane Lconte,  a housekeeper of over 31 years. Last Monday, workers stood up to these abuses and voted overwhelmingly, 110-5, to become members of Unite Here 217, the Northeast’s hospitality workers union.
Workers faced not only their own fears but a management determined to maintain the status quo. Union organizers on the ground estimate that Atrium Hospitality, the owner of the Hilton, spent $1 million on three separate anti-union consultants in a fruitless attempt to stop workers from unionizing. The company required the largely female work force to attend closed door meetings with male managers alone or in pairs to discourage them from voting for the union. Atrium’s Director of Human Resources flew in from company headquarters in Georgia in advance of the vote and managers wore buttons urging a No vote.
How did the union prevail against the onslaught? Solidarity among workers and huge support from the community including local politicians and faith leaders. While I work as a research analyst for Unite Here Local 11, the Los Angeles branch of the same union the workers at the Stamford Hilton are a part of, I first heard about the struggle of the Stamford Hilton workers from emails Rebecca Ennen, of Jews United for Justice, and Aryeh Bernstein, a Jewschool editor, sent on the listserv of Mechon Hadar, which holds its yearly alumni conference at the Hilton.  The outpouring of support from alumni was tremendous, including a suggestion that we all start contributing to pay for the cost of moving the event to another hotel should workers call for a boycott. The next day the Rashei Yeshiva of Hadar called me and asked what they could to help. Subsequently, Rosh Yeshiva Rav Eitan Tucker participated in an interfaith meeting with the hotel’s general manager, expressing support for the workers. In response to the employers’ intimidation meetings, Hadar CEO Rabbi Elie Kaunfer urged alumni to call the hotel expressing their solidarity and demand that the hotel respect workers’ right to organize without intimidation. Jewish Agency Shaliach Elliot Vaisrub Glassenberg heard about the workers’ struggle while attending the Jewish Agency’s conference at the hotel and presented the management with signatures from 150 attendees urging a stop to management’s campaign of intimidation. Local politicians met with the company management demanding they end the intimidation meetings and commit to bargaining in good faith with the workers.
The election victory is just the start of the fight to bring justice to the hotel. Do you know of an event taking place at the Stamford Hilton? If so, contact the hotel, urge them to negotiate in good faith and to reach a just contract that provides workers with a decent wage, safe conditions, and affordable healthcare, and tell them you commit to honoring any future boycott. Make sure that your organization includes force majuere language in future contracts to ensure your organization can pull out of the hotel without penalty if boycott or strike should be called. Rav Chaim David HaLevi, the Chief Rabbi of Tel Aviv, wrote that the “The sages of Israel and their courts always knew to side with the worker” (Aseh L’cha Rav II:64). Your event can too. Join the Fair Hotel program to ensure your organization to commits to staying at union hotels that treat workers justly.
Together, we can challenge injustice not just at the Stamford Hilton but at all workplaces and in halls of power across the country.