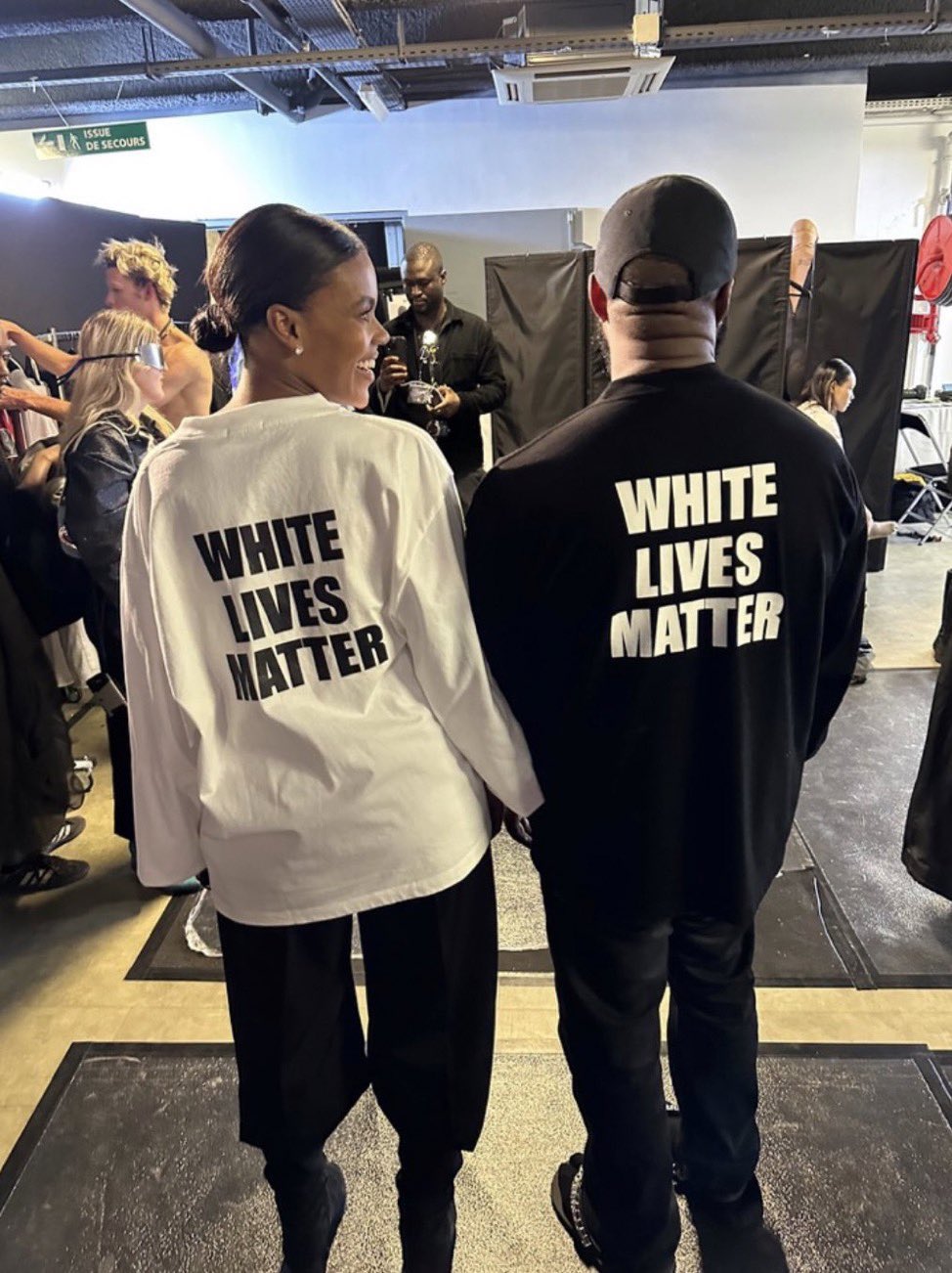 In a recent tweet, journalist Max Blumenthal dismisses Jewish denunciations of Kanye West’s antisemitic twitter rants and Kyrie Irving’s embrace of antisemitic conspiracy theory. Blumenthal charges, as radical scion from inside the liberal citadel, that American Jews are living in a “golden age” of safety, security and prosperity, and to imagine that they could be harmed by tweets from Black celebrities is not only narcissistic, is steeped in deep racism:  it justifies Zionism and leads to what he refers to as “Black humiliation.”

Blumenthal is right to be suspicious of Jewish response to antisemitism expressed by African-American celebrities. For decades the Anti-Defamation League (ADL), American-Israel PAC (AIPAC), Jewish Defense League (JDL) and other organizations on the Jewish Zionist Right have been working to frame “Black antisemitism” as the primary domestic threat against Jews. From the 1968 Ocean Hill-Brownsville strike led by Al Shanker against Black nationalists, to panic over antisemitic statements by Louis Farrakhan, Rothschild conspiracies of Stokely Carmichael, to statements by Jesse Jackson and Whoopi Goldberg, it seems only African-Americans pay an outsized penalty for comments above and beyond their capacity to harm, that white politicos such as Donald Trump, Doug Mastriano, Ann Coulter and Hollywooders such as Mel Gibson are allowed to easily recover from, so long as they support Israel or make a half-hearted apology to a rabbi, any rabbi, even a Christian one.

This reframing of antisemitism as uniquely “Black” has a long lineage. As the ADL’s Arnold Forster and Benjamin Epstein wrote in the influential 1974 The New Antisemitism “black nationalism” has transformed from “racial pride” into a form of “violent racism.” And even more dangerous for its pretense to universal justice is the “Radical (totalitarian) Left,” which is determined undermine Jewish liberal institutions in order to spark their anti-democratic revolution. Together, these forces, argued Forster and Epstein, often working in tandem, collude from the left to see the Jew as the primary enemy in their crusade to end white racism at home and Zionist imperialism abroad. Interestingly, Forster and Epstein absolve white Christianity and Catholicism, arguing both had embraced “liberalism” in sober assessment of the dangers of fascism and religious prejudice. It is the Jews’ erstwhile allies that are its enemies; its historical enemies now its friends.

It should be remembered that when Forster and Epstein wrote The New Antisemitism, one could still talk about the presence of a vibrant, Third World left, including the cultural influence of the Black Panther Party, and still active New Communist, Black Liberation, and Trotskyist groups all of which understood Zionism as a form of ethnic chauvinism and Western imperialism.  Forster and Epstein’s analysis emerged only a year after Zionism was historically equated with Apartheid in the UN (General Assembly Resolution 3151 G [XXVIII], 14 December 1973), with much of the world – especially the Global South and Soviet Bloc – declaring Zionism as a form of racism. It was a book for a very particular conjuncture, one in which Israel’s stature as a beacon of progressive democracy was giving way to what now seems commonsense on the left, and indeed in much of the world: Israel may be one of the last full ethno-states, wholly devoted to preserving an ethnic majority and enforcing an ever more militarized apartheid to keep it.  The fact that The New Antisemitism devotes nearly an entire chapter to the role of the Socialist Workers Party (SWP) – once a major force on the antiwar U.S. left and which now has perhaps 40 members – should say something about the world in which it was written.

Needless to say, this current debate regarding antisemitism is no longer in the context of left-wing anti-colonialism; Kanye West is a reactionary; Kyrie Irving belongs to no recognizable political affiliation. Nonetheless the attention they draw, even in the face of white-dominant movements such as Q-Anon, Christian nationalists, and philosemitic Zionism, seems still rooted in the ADL’s “Black antisemitism” thesis. Adolph Reed’s observation that there is something special, high-powered and newsworthy about “Black antisemitism” seems to hold, as though by the essence of its Blackness, it is more sinister than the ordinary white kind. Why else would Kanye be canceled and Gibson still directing films?

One could stop here, and I suppose Blumenthal does. Only it seems worth pausing to wonder what it means when such antisemitic comments (and their followers) are not mouthed by principled socialists in a critique of Zionism. Ye is hardly a Black Panther; in his MAGA hat and “White Lives Matter” jacket, he is at least one new face of the New Right.

West’s identification with MAGA leads to the critical question of what to make of New Right antisemitism when the spotlight is on Black faces? On the one hand, the attention Ye receives – as opposed to Trump – underscores how hypocritical organizations such as ADL and AIPAC are, both of which muted their criticism of Trump in exchange for policies they believed were even more pro-Zionist than the Democratic Party’s. Yet beyond hypocrisy, it seems worth pointing that West’s comments have mainstreamed antisemitism in a way that Trump could not; he really does appear as the figure in the antisemitic myth, one who merely speaks truth to power, who stands for the small person oppressed by shadowy elites — which is exactly how Chappelle framed it in his monologue on Saturday Night Live.

West and others are more complicated (and compelling) than Richard Spencer or Steve Bannon. I don’t think this means we should give West more attention, but we also need to acknowledge that we are in a far more confusing and dangerous place than the days of “Zionists” vs “international socialists.”  While there was always a grain of truth to Forster and Epstein’s book (sure, some Black power activists and some revolutionary leftists were actual antisemites), it was at heart hasbara and slander: a cynical deployment of at best half-truths in the interests of defending Israel and U.S. imperial policy. It was a defense of liberal imperialism as against the radical left. We are in a much different historical conjuncture now.

As journalist Ben Lorber writes for Political Research Associates, there has been a rise in non-white spokespeople for far-right movements, including the Afro-Cuban leader of the Proud Boys Enrique Tarrio and Stop the Steal organizer Ali Alexander.  As Lorber observed on Twitter, “when non-white conservatives take the lead saying things like ‘white lives matter'” it helps “embolden whites” and eases their fear of being defamed as “white nationalists.” As ethnic studies scholar Kristina Beltran furthers through her analysis of such figures as Tarrio and Alexander (not to mention politicians such as Candice Owens and Monica De La Cruz), there is a new formation of what she paradoxically refers to as “multi-racial whiteness,” by which she means the continent-wide political movements of multi-racial coalitions formed around religious fundamentalism, patriarchy, entrepreneurship, and anti-immigration policy.  “Whiteness” in this construction, is not an essential attribute of one’s person, but rather a political project: what novelist Mat Johnson describes as “less an identity than a political strategy.”

The harm done by figures such as West is thus not to chuff Jews off to Auschwitz or subject them to mass incarceration.  The harm of antisemitism is to sow disunity, fear, acrimony among progressives and to further mystify the actual forces of power under capitalism.  Of course, some Jews are harmed by the proliferation of antisemitic discourse, not only in sensational attacks on synagogues, but in daily harassment and bullying of Jewish people on streets and in classrooms.  But “harm” is not the only, or perhaps the best, measure of the work antisemitism performs.  As Hannah Arendt observed, antisemitism is primarily in the modern era a political formation, harnessed by the populist Right from the anti-Dreyfusards to the John Birchers to the Brown Shirts, as a means to form coalitions and take power.

Antisemitism’s harm is thus to strengthen the very systems of power against which Ye says he rails. If marginalized people need each other – whether to fight the Right, combat climate change, or address issues like public education, health care and the pandemic, then rifts between Jews and African-Americans, often in the same political coalitions (as the two most consistently liberal voting blocs), is a threat to progressive politics — and with climate change — a threat to life itself. This is why Kanye’s statements – and Chappelle’s confirmation of Kanye’s statements — are so alarming and yet so difficult to address. While clearly part of a growing mood of reactionary thought, unlike antisemitism from the likes of Donald Trump or Ann Coulter, one does not want to commit to the idea that popular African American performers are the enemy, not so much for their sake, but the sake of their defenders and supporters, many of whom are now debating whether Jews do actually run the media, rather than say, whether Hollywood should be run for profit, whether its artists receive their fair share, whether it represents marginalized Americans, whether it offers critical insights into class, race, gender, the ecology.

The construction of the “Black antisemite” by organizations such as the reactionary Jewish Defense League was fashioned precisely to combat the internationalist left and to break up progressive coalitions in the name of creating an ethno-nationalist Jewish Right. Yet even if there is no special “Black antisemitism,” there is a far-right antisemitism, and more and less effective spokespeople for this movement – and Kanye West is an effective communicator:  indeed, it is precisely because he is not Donald Trump that he has generated so much controversy, and even support. In other words, West’s antisemitism may not be new, or even particularly noteworthy; but its supporters are.

One obvious way to think about the problem Ye poses is to depersonalize him. To not single him out, even while demonstrating that what he says is actually false. That is, to understand Ye as a cultural part of the New Right — a small part of a growing global movement — and not as a spokesperson for Black America, especially as many Black Americans are rightly uncomfortable with the way Ye seems to be targeted. The project of the left is to remind people that Hollywood is a capitalist enterprise — as is America itself — and has destroyed greater people than Kanye West in the process of ruthlessly pursuing profits. The power studio execs wield in this industry, or any other, does not belong to a single ethnicity, but to the dictates of accumulation and competition: we need more conversation not about Jews, but about capitalism; fewer conversations about sneaker brands, and more about the racialized workers in the Global South who make them.