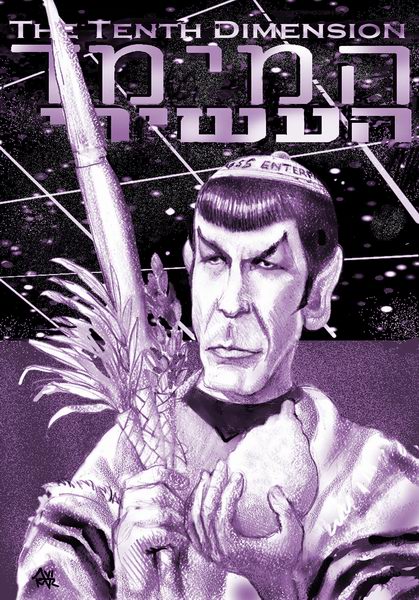 Leonard Nimoy: no mere Jewish celebrity, but a Jew to celebrate

I shed real tears at news of Leonard Nimoy’s death on Friday. The outpouring of grief from every corner of culture and media (including Jewschool) has both surprised and comforted me. Before you read on, take a moment and watch Nimoy do a little a bit of Yiddish Hamlet off-the-cuff (see video above).
Much has been made of the Jewishness of Spock: not just his famously Jewish salute (which was the subject of my bar mitzvah speech), but his status as the learned outsider. (Though, by the way, it’s important to note that Spock was not just a space-Jew, but a patrilineal space-Jew; his father was a space-Jew, but his mother was a regular human.) We Jews, of course, are always quick to lay organized claim to any half-decent Jewish celebrity. But Nimoy never seemed big on organized Jewishness. No, he was one of… us. His most personal public expression of Jewishness was a book of nude photography. And in a world in which Yiddish (reports of its death have been greatly exaggerated) remains a stigmatized lesser counterpart of Hebrew, Nimoy, himself a Yiddish-speaker, was visibly involved with Yiddish culture. Nimoy wasn’t a joiner, and he didn’t go out of his way to attract media attention — so his involvement in Jewish life wasn’t always particularly visible. Yet he was an active Jew, doing Jewish all over the place, a man whose conscientiousness and deeply thoughtful nature were rooted in his Jewishness.
In the passing of Leonard Nimoy, we didn’t just lose a Jewish celebrity; we lost a Jew whose celebrity made him into one of the greatest Jewish role models available to generations of Jews.
I’ll just leave you with something I discovered in a truly eerie moment yesterday. In an episode of Star Trek, regarding the recent death of his father, Spock says:

Curious. That I should hear him so clearly, now that he is dead.