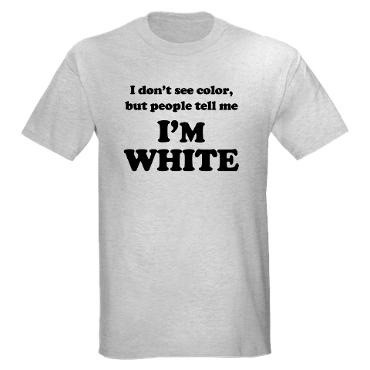 “The language of color blindness—like the language of ‘not racist’—is a mask to hide racism.”
-Ibram X. Kendi, How to Be an Antiracist

This from the mother of a third-grader after her son had told mine that he “didn’t like Jewish people.” You’ve heard it before. “I’ve drafted and deleted several e-mails to you… I don’t know what to say… I don’t know where he learned this… In our family, we don’t see color,” she stuttered after running into me unexpectedly days after the incident. The woman was shocked. She probably believed that she was neither racist nor anti-Semitic. In any case, what would it mean to “see” color in the case of an ostensibly white Jewish kid (though my son is more olive-skinned than many of his lighter-complexioned classmates)? It is almost as if the claim to color blindness were to represent a kind of self-mortification, as if depriving oneself the pleasure of seeing hues—indigo, azure, burgundy, fuschia, midnight blue—were somehow to compensate for or counteract white guilt: a strange method of atonement, indeed. Recall Baby Suggs in Toni Morrison’s Beloved, a character who spends her last days pondering the colors “she never had time to see.”

Of course, we know from Eduardo Bonilla-Silva, Ibram X. Kendi, Tricia Rose, Keeanga-Yamahtta Taylor, and others that white people who claim not to “see color,” who claim to be color blind, are in fact blind not to color, but to racism, to anti-black violence, and to their own white privilege. The blindness described here, however, is not a problem of vision in the restricted sense of the word, in the sensory sense of the word. As a friend of mine recently expressed as her social media feeds overflowed with images of the murder of George Floyd, the spectacle of racial violence is part of the violence itself. So it is not, or not always, a question of seeing more, of more visibility. Instead of seeing, some suggest—evoking yet another bodily sense—that those of us who claim or aim to be allies should begin to listen. Indeed. Yet listening does not merely involve the hearing of stories, lived experiences and, in the age of social media, hashtags and slogans (although it also includes those forms of listening). It also implies listening, and reading, for that which is not immediately legible or apparent.

You probably sense that I am talking about something more than sense-perception. Just as blindness and insight (as literary theorist Paul de Man taught us) are metaphors for a broader kind of perception (in which case, paradoxically, insights can be gained by attending to blind spots), listening implies a positionality, even a certain passivity—a passivity (a temporary pause or withdrawal) that motivates and fuels future action.

But there’s more still. Part of the problem with seeing or not seeing, or with listening or not listening, has to do with our assumption that senses are easily discernible one from the other, that they are sovereign, autonomous: we see color with our eyes, we hear music with our ears, we taste food with our tongues. For centuries, if not millennia, scientists and philosophers have debated whether senses are in fact independent, citing the fact that we can also perceive sound through vibrations in our bodies, or the fact that when our sense of smell is impaired, it also affects our ability to taste. Examples of synesthesia—defined as “a condition in which a sensory stimulus presented in one modality evokes a sensation in a different modality”—abound in literature (Dante portrays Hell as the place where “the Sun is silent”) and accounts of psychedelic experience (first-hand reports of LSD trips often describe having “seen music” or “heard colors”).

Indeed, last week’s Torah portion—one of the most significant scenes in the Hebrew Bible, in which Moses descends from Mount Sinai to deliver the Ten Commandments to the ancient Israelites—is narrated using just such a literary device:

And all of the people saw the sounds and flashes [thunder and lightning] and the sound of the ram’s horn and the mountain in smoke, and the people saw and they trembled and stood at a distance.

In this foundational scene of revelation, the direct experience of the divine, too, is described using a synesthetic trope. If the sound of thunder is frightening, if the sight of lightning is startling, seeing sounds is an even more powerful, uncannily unsettled experience that inspires fear and trembling in the ancient people. For this event to be worthy of its name, their senses must be described as having been scrambled: it is only by confounding our usual modes of perception that we can truly begin to pay attention.

Philosopher Emmanuel Levinas, finally, also mobilizes synesthesia as part of an extended discussion on the complex but necessarily linguistic component, or medium, of ethical experience. Levinas—whose characterization of ethics revolves around the biblical prohibition of murder, the Law the Hebrews received that day at Sinai—seems to suggest that sense-scrambling is intrinsic to ethical experience, to responsibility for the other. He warns against “seeing” the Face of the Other as mere physical traits: “You turn yourself toward the Other as toward an object when you see a nose, eyes, a forehead, a chin, and you can describe them… When one observes the color of the eyes one is not in social relationship with the Other.” Instead, one responds ethically to the Other by engaging through language, by hearing and responding to the commandment “Thou Shalt Not Kill” when facing the Other. Levinas turns to the synesthetic figure of the listening eye to characterize such an encounter: one “listens” to the Face, one “sees” the commandment. Here, the sovereignty of the senses falls apart and, along with it, the violent sovereignty of the subject, what Levinas calls the “Imperialism of the Same.”

So what do we hear, if we “listen” to color today? What are the ethics and politics of synesthesia? If Hell names the place in which the Sun is silent, how do we begin to listen to the Sun? Synesthetic ethics, synesthethics, if you will—a suspension of the sovereignty or autonomy of any one sense, as well as the sovereignty of the subject—begins with a fundamental distrust in our senses, or in our tendency to generalize from a sense-perception. “Seeing” color or phenotype is a problem when we use that information to make a generalized assumption about that person, but claiming not to see color is equally problematic. Synesthetic ethics means that we guard space for Black joy, for the “thinking” of color lovingly narrated by Morrison. It also means that we are called upon to read between the lines when we look and listen, that we retrain our senses, but also—and more importantly—our interpretive skills. Quite distant from evoking a debate over the merits of “proper” versus “improper” protest, the image of a broken storefront window suddenly becomes the thundering sound of grief and rage. It means that we won’t only listen with our ears, but with our entire bodies, and with our hearts. A shriek, a cry, the piercing sound of shattered glass must make us tremble. Indeed, it may be a violent experience: but it is only from this kind of violence, the violence of fear and trembling at Sinai, that the pursuit of justice—here, racial justice—can begin.

“Here We Are”: A new writing opportunity from Lilith Magazine: