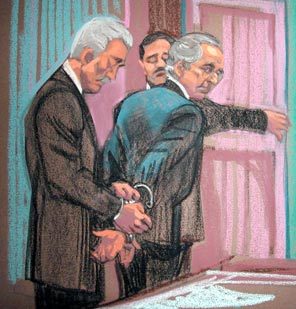 NYT reports that your favorite scam artist and mine, Bernie Madoff, has been given the maximum sentence for his gigantic ponzi scheme that left many broke, did irreparable damage to Jewish non-profits and gave immense amounts of ammo to “Jews control the money” variety anti-Semites.
Mr. Madoff has been sentenced to 150 years in prison, despite claiming remorse. The Judge responded, in turn, deeming Madoff’s crimes “exceptionally evil.” A fair characterization in my opinion.
Of himself, Madoff said: “I live in a tormented state now, knowing all of the pain and suffering that I’ve created. I’ve left a legacy of shame, as some of my victims have pointed out, to my family and my grandchildren.” Something tells me this was probably too little, too late.
By most, Mr. Madoff’s name will one day be forgotten, probably long before he dies behind bars for the 20 years of fraud perpetrated in the name of greed. Yet, this case highlights so much of what is wrong in the culture of money-making. One man lies, hundreds suffer, and the entire financial industries trembles. Amazing.
While many of the victims of Madoff’s crimes were famous, wealthy people, the saddest victims are clearly the individuals who went from riches to rags, over night, and perhaps more so the non-profits who lost so much and will struggle for years to recover from this loss.