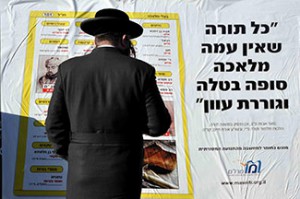 The Masorti movement (the Israeli and generally non-North American arm of the Conservative movement) is bringing out the snark a bit with a new ad campaign to address the issue of government stipends for yeshiva students in Israel.
They’ve put up big ads all over Jerusalem (including on the back of buses) with the statement, “Torah that is not accompanied by a worldly trade will in the end amount to nothing and will lead one into sin” (Pirke Avot, chapter 2) and an index of the occupations of some of the tradition’s great sages–Maimonides was a physician, Rashi was a vintner, R. Yehoshua ben Hananiah made needles, and so forth.
I, for one, am amused, and glad they’re throwing down on this one.
You can see a close-up of the ad here.

16 thoughts on “Masorti Gets Sassy”