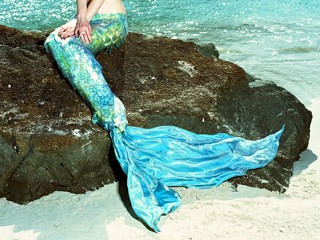 This isn’t a joke.

The Israel Hayom newspaper reports that the Kiryat Yam City call-in-center has been receiving several weird calls over the past few weeks all from local residents claiming they have seen a mermaid on the Kiryat Yam beach.

An alleged mermaid, said to resemble a cross between a fish and a young girl, only appears at sunset. It performs a few tricks for onlookers before disappearing for the night.
One of the first people to see the mermaid, Shlomo Cohen, said, “I was with friends when suddenly we saw a woman laying on the sand in a weird way. At first I thought she was just another sunbather, but when we approached she jumped into the water and disappeared. We were all in shock because we saw she had a tail.”
The sightings apparently began several months ago.

(NY Daily News has another version of Shlomo Cohen’s experience.)
The town, near Haifa, took the sightings seriously and has offered up a $1 million prize to whomever can offer proof that mermaids are living off its shores. The story should end there, right? We should all just roll our eyes and be amazed that folks think this is real. (Or maybe you’re a believer and are now planning a trip to Israel to go swim with Ariel.) Either way, the story should end there.
But no. Kiryat Yam is being sued by the Mermaid Medical Association, based out of Brooklyn, NY. I’ll let Gothamist take it from here:

The MMA isn’t at all worried that Kiryat Yam is probably like the government scientists who tried to take Daryl Hannah away from Tom Hanks, however. Nope, they’re actually suing the town for defamation, because they exist in order to defend the rights of mermaids worldwide. We really hope this does end up in International court, just so we can all read transcripts in which Kiryat Yam is berated by some Brooklynites for “badly and outrageously damaging the legendary mermaid legacy.”
Mermaids and their supporters are nothing if not fair, however, and have given the town 10 days to rescind the reward. Alas, town officials are playing hardball, and say they will “appeal to the organization which sent the letter and suggest that it join the search for the mermaid in order to perpetuate and preserve it.” Exactly, why are these two groups fighting when we’re thisclose to proving the existence of a mythical magical sea creature? Round up the unicorns and let’s go! But first, read more about past sightings (and hoaxes) here.