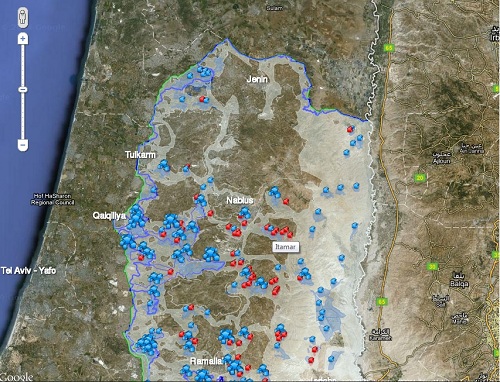 It is with great sadness that I report that last night a terrorist slipped into the West Bank settlement of Itamar and stabbed five members of a family to death, including three children: a month-old infant, a 3-year-old and an 11-year-old. Three other siblings were unharmed, undisturbed in another room. It is the deadliest attack since last August when four settlers were shot on their way to Kiryat Arba — and certainly the most gruesome in recent memory.
The attack brought instant rounds of condemnation by Palestinian Authority leadership, including the Prime Minister, President and Foreign Minister. Prime Minister Salam Fayyad condemned the attack immediately, saying, “There ought to be no doubt as to where we stand on violence…We reject it, and we always condemned it.” President Mahmoud Abbas said in a statement rejecting “all violence directed against civilians,” PA president says “what is needed is to speed up a just and comprehensive solution to the conflict.”
Hamas meanwhile, hailed it as “heroic operation.” Additionally, the mayor of Itamar took the opportunity to call for “human rights defenders” responsible for “domestic incitement” to be investigated and executed. He called the government to “probe all the bleeding hearts that de-legitimize the residents living here,” adding further, “There is a direct link between domestic incitement and the murder. We need to find those responsible for the attack and give them the death penalty. I can’t recall such a horrific terror attack.” Talk about using tragedy cynically for one’s political gain.

As we mourn the senseless, cruel deaths of innocent children and as we join the Israeli and Palestinian leaders in condemning vigilante violence by any party, we need to remind ourselves why we seek to end this conflict peaceably: to save life. There is no greater gift to the world than a human life, and no greater sin than to snuff one out. For all those who believe we can take our time — and wait a decade or more for “ideal conditions,” I remind them that the status quo is an active murderer. The true villains are not just child killers and vandals, but a stalemate empowering vigilantes against one another.
Israeli Channel 10 TV reported “the context of the murders are escalating Palestinian casualties, from the military and settlers, in area,” and that “we [Channel Ten TV] don’t report enough about these.” (Translation courtesy Didi Remez.) The stabbing was preceded and followed immediately by “price tag” retribution by settlers.
I ask why the American Jewish community (at the JCPA annual plenum earlier this week) failed to pass a resolution proposed by the Reform movement asking Israel to abide by its agreements and dismantle ideological, illegal and unhelpful settlements. The settlement and constellation of six illegal outposts known as Itamar is a stone’s throw from Nablus and is situated a few miles outside the security barrier. It is one of the “ideological” settlements founded by religious-nationalist groups as part of their Biblical claim to the whole of Israel. It is surrounded on all sides by Palestinian villages and protected by Israeli checkpoints. It is beyond understanding why the Israeli government allows these settlements to exist as a finger in the eye of every Palestinian — hateful or peaceful — in the area.
And before my dutiful commentors accuse me of blaming settlers, settlements or Israel for the deaths of children, let me clarify that such is not my point. The individual who did this failed to grasp the key lesson of the inhuman treatment of their own people: inhumanity breeds inhumanity, death breeds death, and violence leads ever downward. May this person be found, tried, jailed and moved to repentance. May that person look in the eye the 12-year-old girl who discovered her mother, father and baby siblings dead, and realize what beauty was destroyed.
Instead, I blame the banality of evil — the patience that slowly bleeds both sides dry, the system of grinding attrition that could be stopped would the leaders of both sides cease inane oneupmanship and settle a negotiated agreement. I blame those who insist on retribution — which means us all, at one point or another. I blame the monster that dehumanization has unleashed in good and decent people, often who watch from a distance and do nothing.
I blame us. I blame us for not thinking creatively, collaboratively and swiftly to find a way out of the stalemate. I blame us for finding foes in not the system but each other, between Jews and between Palestinians. We bear this blame together. We should all be moved to end the conflict, instead of justifying the wrongs of the past.