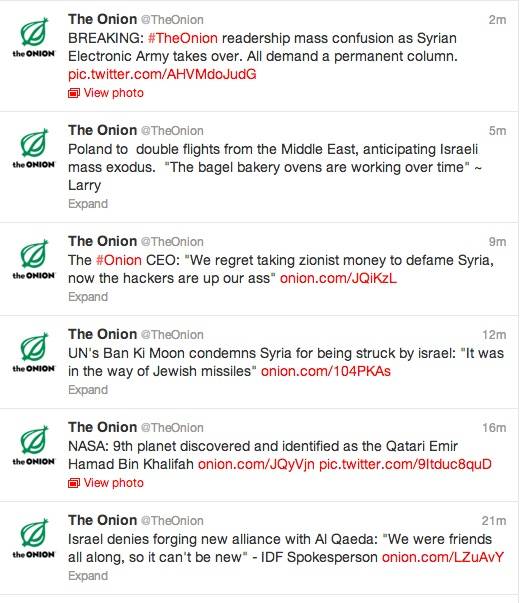 Mishegaas, or more reasons why The Onion rules everything

NO, really:
Onion gets hacked by Syrian propagandists, responds with funny article. The Onion got hacked, sending out a bunch of nonsense tweets such as:

To which they responded with their usual aplomb. HT BoingBoing
Is Yiddish dying? Uh, no.
Is Jack Rosen hijacking the AJCongress? Does anyone care?
Dvora Myers on Unorthodox Gymnastics comments on the chutzpah it takes to thanks God for not being a woman ironically. What do you think?
Doctor Who is a Jew? Come on Tablet, can’t you do any better than that?
And here’s a kickstarter to translate for what sounds like a completely fascinating book. I can’t wait to read it.

If you can read Yiddish literature only in English translation, Joseph Opatoshu’s 1921 novel, In Poylishe Velder (In The Forests of Poland),is one of the most important works of world literature with which you’re probably unfamiliar. A vast panorama of Jewish life in Poland during the 1850s, Opatoshu’s novel concentrates on backwoods Jews who live among gentile peasants rather than in Jewish communities in cities or shtetlekh. Touching as it does on hasidism, heresy, pre-Christian Polish folk customs, wife-swapping, messianism, and Polish nationalism, this book will change the way you think about Jewish life in Poland. Those parts not set in the forests or on the road take place in the court of the Rebbe of Kotzk, the last of the classical hasidic leaders. The Rebbe and his court are portrayed so convincingly that even members of the book’s original audience often forgot that they were reading a novel and not an intimate history of hasidism in Kotzk. It’s the price that Opatoshu had to pay for writing some of the best prose ever published in Yiddish.

Of course, I consider myself the last of the Kotsker Hasidim, so perhaps it’s just me.

From Mourning to Teshuvah:  On the Distinction between Pain and Suffering