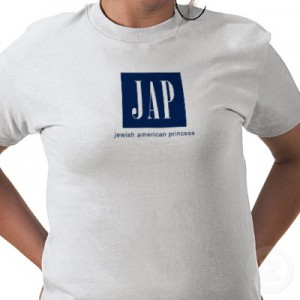 More of the New JAP-baiting

For several years, now, that old cocktail of anti-Semitism and sexism has been back on the rise–whether given faux-new-language, used as a way to cloak Jewish women comics, a way to talk about one’s suburban upbringing and/or privilege, a troubling category investigated by, or revivified by, art, and so forth.
The question I pose to you all: Why is it suddenly seemingly acceptable to use this tired old stereotype? Is it truly ironic now, or is it the same song on a different day? (I think the latter, really, but folks like Heeb have tried to make it the former for years–do they succeed? If so, what’s different about what they do and some of the nastier versions of this? If not, why not?) What’s going on in our culture that gives rise to this now? Some of it, sure, is that the people who were kids when this came around the first time are now hipster adults–but somehow, I don’t think that’s the whole story. What else is going on?
(We’ve written about this before, including this week, but the phenomenon just keeps coming, so perhaps it’s worth thinking about why in a bigger way.)
In any case, here’s the latest addition to the canon:

What do you think?

20 thoughts on “More of the New JAP-baiting”