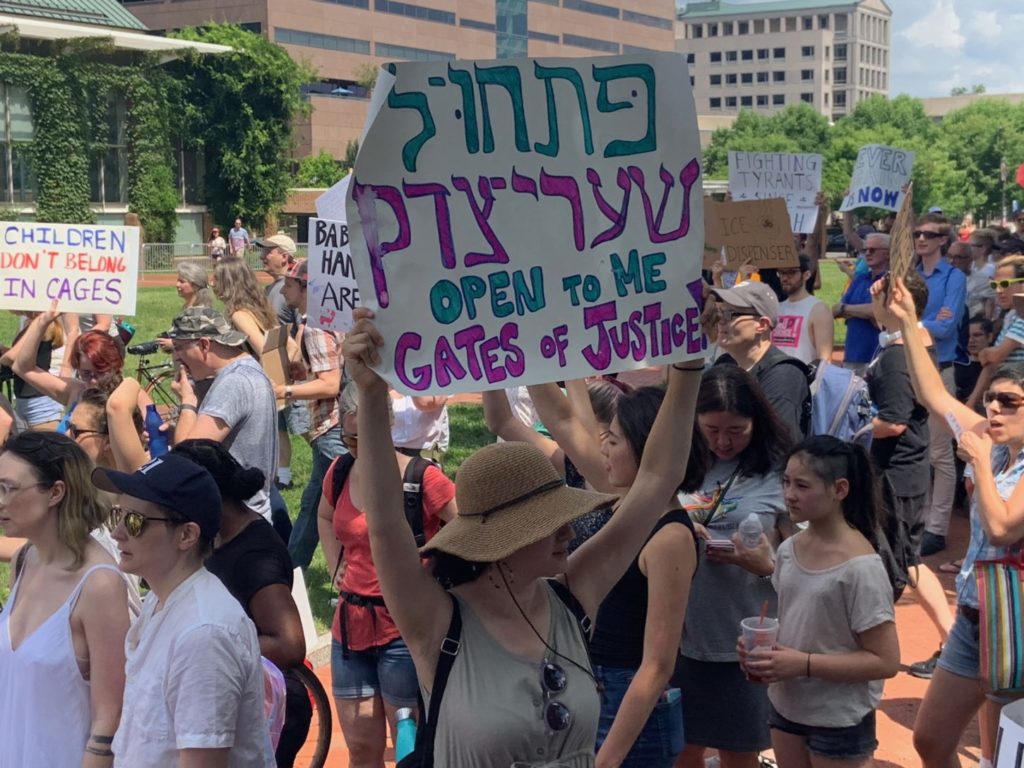 We seem to be in an explosive era of political engagement and political protest. On Tisha b’Av alone there were hundreds of Jews in the street decrying the depredations of ICE (Immigration and Customs Enforcement) and CBP (Customs and Border Protection), and demanding that the government “close the camps” and treat refugees as human beings who have a right to seek asylum. This action was part of a broader range of actions in coalition with impacted communities and multifaith partners (those two groups are also overlapping). In the past week just in Los Angeles there was an action on Monday, organized by NeverAgain at the headquarters of Geo Group, a $2 billion dollar corporation which owns and operates some of the largest and worst private detention facilities. The action shut down the building in which Geo Group’s West Coast headquarters is located, for five hours. This was followed on Thursday by a protest organized by CHIRLA (Coalition of Humane Immigrant Rights in Los Angeles) at the Adelanto Detention Center which Geo Group owns and operates for ICE. Hundreds of people from CHIRLA, NeverAgain, Bend the Arc, and other groups held vigil across from the detention center. And then this past Sunday hundreds showed up to the Metropolitan Detention Center, ICE’s major processing facility for undocumented immigrants before they are deported or transferred to Adelanto or elsewhere. A coalition of more than a dozen organizations, representing a cross section of the Jewish community and our multifaith partners, held services, chanted lamentations both traditional and contemporary and decried the abuses being done in our name by our government. The Jewish community showed up to turn grief into resistance.

This outburst of activism, as is inevitable, has brought in its wake both self-criticism—movement activists questioning methods and practices—and just criticism—folks from outside the movement who self-identify as agreeing with the goals of the movement but who are disturbed by some of the tactics. Criticism and especially thoughtful self-criticism is helpful and welcome. However, I want to point out some avoidable pitfalls in this conversation.

Rabbi Moshe Chaim Luzzato, the 18th century mystic, philosopher, and author wrote the following in the classic book of the mussar tradition Mesillat Yesharim/Path of the Righteous:

Thus, we see that a person is truly placed in the midst of a raging battlefield. For all matters of this world, whether for the good or for the bad, are trials for a person. Poverty from one side versus wealth from the other. This is as [King] Solomon said: “Lest I be satiated, and deny You, and say, Who is G-d? or lest I be poor, and steal…” (Prov.30:9). Tranquility on one hand versus suffering on the other, until the battle is waged against one from the front and from the rear.

In the wake of the Tisha b’Av actions, as in the wake of every other action in which Jewish activists attempt in one way or another to deploy Jewish ritual, liturgy, and/or symbolism in the service of a demand for justice, there was an outcry about the “politicization” of Jewish ritual. Jewish social media was rife with those who agreed with the political positions of the demonstrations in whole or part, but were offended at the supposed misuse and abuse of liturgy and ritual. (Of course there were those who disagreed with the use of Jewish ritual and liturgy because they disagreed with the political positions. I am not concerned about those folks here.) How could we (I use the first person plural as I was one of the organizers of the LA Tisha b’Av action) take a fast day which commemorates Jewish tragedies and bring it out to the street and make it outward facing—commemorating an ongoing tragedy in which we are implicated but which mainly impacts others? Can one actually fulfill their Tisha b’Av obligation by praying (even with a minyan) on the street and chanting lamentations which refer to contemporary situations? Is this not just a mockery of Jewish ritual?

As one who grew up in the Soviet Jewry movement, I find this objection somewhat laughable. I distinctly remember participating in an Orthodox Tisha b’Av minchah service opposite the Soviet embassy. We prayed in tallit and tefillin and chanted Torah. In the street. This was not a new phenomenon even then. The idea of Jews coming together in public prayer and fast is anchored in the Mishnah, reinforced in the Talmud, and codified in the codes. It seems like there are times in Israel when the hareidi community is reciting Psalms in the street for this or that abomination (drafting Yeshivah boys, pictures of women on public buses, etc.) more often than they recite them in synagogue.

So what is the real objection here? If it is an objection to the deployment of ritual itself in the service of or in support of righteous political ends, then that itself is a political and, I would argue, and aesthetic choice since there is obviously abundant precedent for using Jewish ritual within political settings.

There is another oft-stated objection, which is that those who are organizing these demonstrations are deploying Jewish motifs out of ignorance. They don’t actually know how they are done and are therefore tone deaf to what should happen at a Tisha B’av service. Therefore the combined service/action looks more like a lightly Jewified demonstration. While there is some truth to this at times, the response to this is to get more involved so that you can impact what the next action looks like. If you are Jewishly knowledgeable, and in agreement with the demanded outcomes, it is your obligation to make sure there is more Jewish at these events.

Finally, there is the aesthetic objection. It is not framed as such. It is framed as a lack of nuance. Protests demand a binary approach to complex and complicated problems. Immigration is a complicated issue and these people screaming on the streets have no answer to this complicated issue other than “abolish ICE” or “Defund ICE.” Furthermore, Jewish texts and traditions do not supply specific policy proposals to the thorny questions of immigration policy. Saying Judaism demands this or that about immigration is misrepresenting a textured tradition. Unfortunately, goes the kicker to this argument, the folks who organize and populate these demonstrations are not capable of knowing that. Their Judaic knowledge is not up to the task of those discussions.

This brings to mind a story about a multifaith delegation opposed to the Vietnam War who managed to get a meeting with Robert McNamara, Secretary of Defense. After a short discussion McNamara turned to the group and challenged them: “Okay let us say that I agree that it is necessary to withdraw all US troops from Vietnam tomorrow. How would I be able to do that?” Rev. George Regas, one of the group of clergy, immediately responded: “We are demanding that justice run down as waters, and righteousness as a mighty stream, and you are asking us about the plumbing. Plumbing is your job.” We are not the experts in military logistics here, Regas was saying, we are channeling the righteous rage for justice of the prophets.

There is a difference between a policy conference and a demonstration. To think that people who come to or organize demonstrations have not thought about policy questions requires an attitude of arrant arrogance. The point of demonstrations is to amplify the conclusions of those discussions. And yes, not everybody who participates in the demonstrations or rallies is a policy expert. But they still are capable of making moral decisions and leaving the plumbing to the experts. Or, more to the point, amplifying the moral conclusions come to by policy experts.

I fear that the actual objection here is the fear of becoming one of “those people” who yell and chant on the streets, rather than thinking deep thoughts and seeing the two sides of every situation. Once I join a crowd on the street, I am no longer a unique individual who can float above the madding crowd.

However, the obligations of democracy, similar to the obligations of Judaism, are accomplished with and in a crowd. The glory of God is enhanced by the masses, to paraphrase Proverbs. Or as Abraham Joshua Heschel said, explaining his decision not to stay in his study with his books: “I’ve learned from the prophets that I have to be involved in the affairs of man, in the affairs of suffering man.”

Standing above and aloof is not a sign of thoughtful superiority, it is often a sign studied amoral apathy.

At the other end of the spectrum, Arielle Angel, the editor of Jewish Currents, recently wrote a very thoughtful essay, which critiqued a certain type of protest which had as its goal going viral. That is rather than mobilizing masses, this type of protest achieved its end if pictures of the disruption it created, or the arrest it provoked were widely reproduced on social media. In her words

This logic locates the most valuable end goal of an act of protest in its consumable, shareable image, conflating a protest’s impact with its optics. Following this thinking to its extreme, as long as a protest’s image went viral, it would be just as well if the protest itself didn’t actually occur, but was performed instead on a large and lifelike set.

The piece concludes with this counsel: “…as we stumble our way through the practice of disruption, why not keep the guiding principle of real power—of reality—in mind? Why not recognize “good optics” as one potential outcome of direct action—a tool to be leveraged in its wake, as opposed to the entirety of the toolbox? Why not act for ourselves and not an audience? Replace the careful orchestration of an image of confrontation with confrontation, plain and simple?” (It is worthwhile reading the whole piece.) I worry that Angel is setting up another binary between actually disruptive actions and merely symbolic or theatrical actions. Following this binary would be self-defeating.

I would argue that there are no “actually disruptive” actions which are not also symbolic. The point of disruption is to point beyond itself to a political issue. Even if the actual functioning of state or private power is disrupted for an hour or a day, the political impact is not that time frame, it is the statement that is made and implied consequences. If an Amazon store is disrupted for a few hours by courageous protestors risking arrest, supported by a crowd of hundreds, the actual material impact is negligible on Amazon’s bottom line. However, the symbolic threat of consumer dissatisfaction is palpable. The amplification of the injustice (profiting from a relationship with ICE) and the way it may make some folks think of their consumption as having an ethical impact is actually the point.

At the same time, if the bar for a substantive action will be arrestable disruption, the barrier to participation will have risen greatly. It is always important to remember Erica Chenoweth’s takeaways from her powerful book Why Civil Resistance Works. Violent resistance demands a far higher bar for participation. Nonviolence can be practiced on the streets but also in other ways (and she has a list). In the same fashion, if one of our goals is, and should be, to create a mass movement, then we must also have symbolic, non-arrestable actions which allow more people to take part. This is the way we build a mass democratic movement, and also amass the masses that are necessary to shut down the machinery of evil.

The day is short and the work is overwhelming, however, the reward is great. The reward is justice.