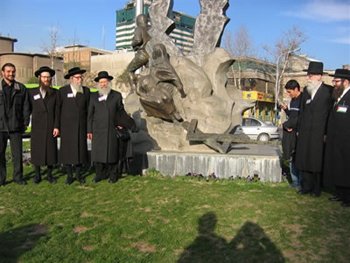 In a story on Neturei Karta’s visit to Tehran, the Jerusalem Post claimed that delegation head Rabbi Yisroel Dovid Weiss supported the regimes stand on questioning aspects of the Holocaust, but Rabbi Weiss insists that the quote and sentiment is a forgery.
The Jerusalem Post reported,

At the meeting, according to the Iranian news agency IRNA, Weiss “praised the ‘enlightening’ statements of Iranian President Mahmoud Ahmadinejad about the Holocaust and said the establishment of a Zionist government and occupation of Palestine are contrary to the injunctions of Judaism.”

But Kavkaz Center insists this was a “wrong quotation,” and Rabbi Weiss assures us (or at least, he assures the Muslims who read Kavkaz on a regular basis) that,

“We have just come to visit Iran in order to show to the world public opinion that the West’s propaganda so implying that Iran is anti-Jewish and anti-Semitic is all a lie and that Jews are living along their Iranian brothers peacefully.”
He also stated that the second goal pursued by the trip is reconfirmation of the very fact that Judaism is totally different from Zionism and that the two are completely in opposition.
Rabbi Weiss rejected Sharq’s article that the visit has been arranged in order for their participation in a Tehran conference on the Holocaust and reiterated, “we have mentioned everywhere that the above goals constitute our motivation for visiting the Islamic Republic. We have never stated such a thing and all the media present there can testify to that, actually we have never even heard of such a conference.”

The picture is of the delegation “paying respect to Palestinians at Palestine Square.”