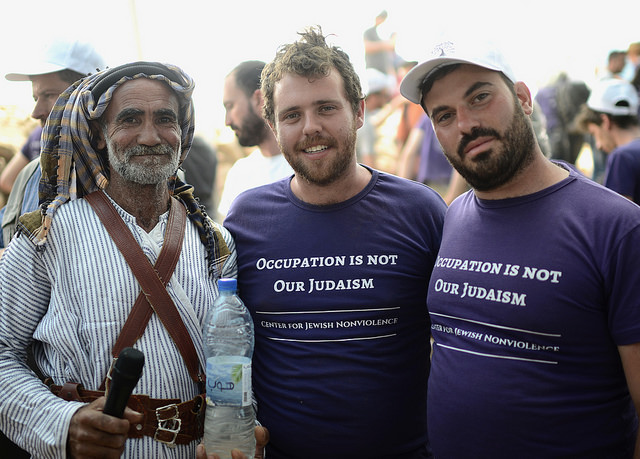 Non-Violent Direct Action Can Be Our Big Tent

The Crucial Lesson from Sumud Freedom Camp, Day 11 and Raid #3
by Jodi Melamed
I have learned how valuable a piece of fabric can be in the South Hebron Hills. It is Day 11 of the Sumud (“steadfastness”) Freedom Camp, a bold Palestinian-Jewish effort to help the families of Sarura return to the village they were evicted from in the 1990s, after the building of an illegal settlement nearby, and to hold the land with them through active nonviolence, in co-resistance to occupation.  I watch on livestream as the IDF, the border police, and the civil administration raid the camp for the third time. They rip, dismantle, and steal the large, blue tent that sheltered myself and many others; they detain activists in the cave home of Fadal Aamar, our host on the land, and take his car, the sleeping mats, anything that could provide shade or sustenance. Then, after hours of harassment, they cruelly leave those in the camp defenseless under the blistering sun during Ramadan.  On the livestream filmed by Tariq, a brave land defender and university student from Umm al-Khair, I am saddened to catch of a glimpse of the illegal, hilltop settlement of Havat Maon, protected in its illegality (and provided with irrigation, watchtowers, electricity) by the same soldiers who have taken away the next to nothing in Sumud camp. The worst part is to hear Tariq’s narrative, as he’s running to film the military dismantling the camp: “My friends, there should be more internationals here.”
Eleven days ago, I was one of more than 130 American and international Jews working with tens of Palestinians and Jewish Israelis to start Sumud Freedom Camp on the ground under the leadership of a Palestinian-led steering committee including members of the Popular Committees of the South Hebron Hills, Youth Against Settlements, Holy Land Trust, Combatants for Peace, All That’s Left: Anti-Occupation Collective, and the Center for Jewish Nonviolence (CJNV).  Our action has been unprecedented for bringing in so many Jews from abroad to use our embodied privilege as internationals and mostly white and Ashkenazi Jews to mitigate and publicize the violence routinely inflicted on Palestinian human rights defenders. Yet to my mind, it was also remarkable for bringing together, under the umbrella of the Center for Jewish Nonviolence, left-of-center American Jews usually separated from one another by dividing lines that seem hard drawn: secular vs. religious, liberal Zionist vs. non-Zionist vs. anti-Zionist, and (hardest of them all) supporters and opponents of the Boycott, Divest and Sanctions movement. We were JStreet and Jewish Voice for Peace, Hillel and Open Hillel, socialists and members of conservative synagogues.

In the doing of nonviolent direct action with the families of Sarura and our Palestinian and Israeli partners, these divisions were simply irrelevant. They were left behind when we started actualizing movement building by putting ourselves altogether in what CJNV trip leader Erez Bleicher has called a space of “vulnerable resistance.”  This was a dramatically differentiated space, with the vulnerability of CJNV members being limited to risking arrest and deportation, while our Palestinian partners made themselves vulnerable to extended loss of freedom , injury, and worse. Yet, in practice, there was a kind of unity in facing settlers with arms linked together and in risking that our nonviolence would hold down to the last person, in the face of aggression from heavily weaponed soldiers. As these soldiers dismantled the Sumud camp for the first time (on the second night), I could see that they recognized our unity; they laughed at us; they took selfies; they tried to separate out Palestinians; they kicked and hit many of us; they were dismissive and angry; but they had to deal with our unity and still, no one – yet – has been forcibly taken away from Sumud camp.
In the face of that unity, I am left thinking about how much the division in left-of-center American Jewish communities results from the same, right-wing divide and conquer strategy that causes fragmentations, division and isolation in Israel Palestine.  I say this as someone who is committed to Boycott, Divest, and Sanctions as a powerful, nonviolent movement, yet I have begun to think that BDS sometimes takes all the oxygen out of the room.  As long as we are arguing about BDS, we are not hearing the Palestinian narratives we badly need to hear in their depth, detail, complexity, variation, and thickness, with their multiply embodied and located analyses of the past and present and strategic imaginations of the future. In Sarura, I heard a story from Fadal Aamar, our host on the land, about the day in 1997 when military trucks came and loaded everything in his house and then his family into jeeps and drove them forcibly to Jaffa. Returned 20 years later, he wondered if it might be possible for some of his children to join him and how many sheep the land could now sustain. I heard stories around the fire from a young activist from Hebron, who had to sit on a coke bottle for hours to try to force him to falsely confess to owning a knife supposedly found at a checkpoint, while he was hosting visiting guests from the United States at the Youth Against Settlement House in Hebron. I heard so many stories of past mutuality and friendship among Jews and Palestinians in the pre-1948 era, stories offered as hope for shared wellbeing and friendship in a to-come time after occupation.
The most important lesson I learned at Sumud Freedom camp is that nonviolent direct action against the occupation can be our big tent. As Antwan Saca from Holy Land Trust has emphasized, it can encompass a diversity of political beliefs and narratives. This is because nonviolent direct action does movement-making at the level of creating relationships, of active social process, still in solution. It interrupts all the line drawing and framework which cohere, even in opposition, to right-wing strategies and tactics. Most importantly, the “big tent” of nonviolent direct action has been erected by a vibrant, on the ground Palestinian mass civil disobedience movement, which is inviting Israelis, internationals, and Jews from abroad to join in the struggle. In the meantime, my friends at Sarura are rebuilding Sumud Freedom Camp for the fourth time. They are calling for justice seekers to join them physically or to support them in securing new shelters, sleeping mats, and other materials to sustain their presence on the village land. https://www.generosity.com/community-fundraising/sumud-freedom-camp-a-right-to-stay/  Bit.ly/DonateSumud