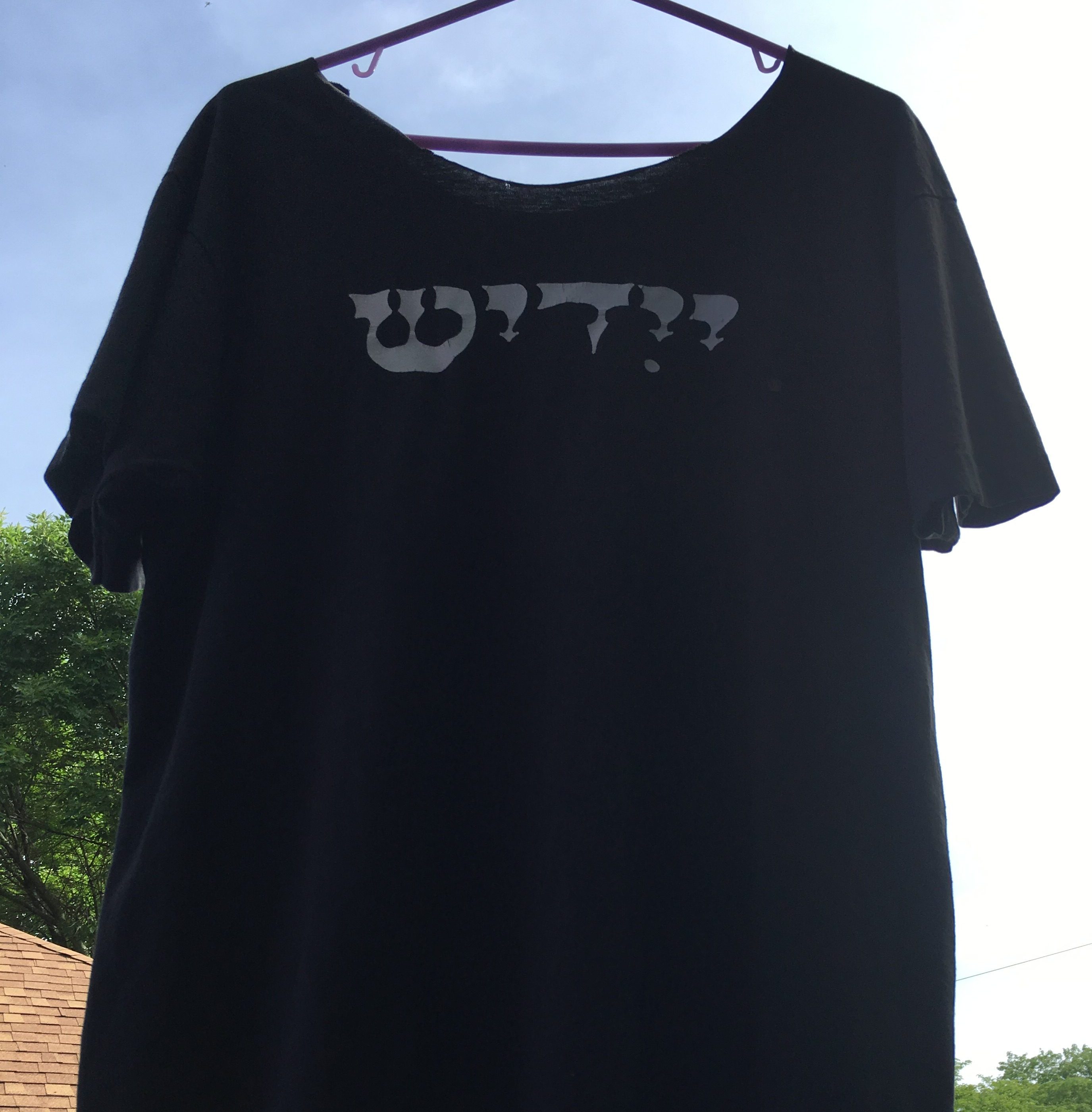 Twenty years ago, I returned to Toledo, Ohio from the YIVO Institute’s Uriel Weinreich Program in Yiddish Literature, Language and Culture in New York City with a t-shirt. It was black, with the word “Yiddish,” written on it in the Hebrew alphabet.  I wore it proudly: to me, the shirt represented a diasporic Jewish identity that made more sense to me than the liberal Zionism I grew up with and had rejected as a young adult.
A few weeks after my return to Ohio, I waited in line at the Tiger Bakery, a Mediterranean deli then owned by Libyan immigrants.  When it was my turn, the young man working the counter smiled at me and said, carefully: “I know what your shirt says.  It says ‘Jewish’.”
He told me that he was Palestinian, from the West Bank, and that he was a student at the University of Toledo.  It had never occurred to me before that, of course, Palestinians in the West Bank would be likely to know Hebrew.  The word “Yiddish” means “Jewish,” in Hebrew, as it does in Yiddish. I hadn’t considered what that word might signify beyond my happy immersion in Yiddishkait at the YIVO; hadn’t thought of the word “Yiddish” as signifying oppression.
Historical identities swirled around this deli encounter: Ashkenazi Jew and Palestinian; immigrant and native born; professor and student; deli worker and patron. My nascent, Yiddish-accented Jewish identity and the Palestinian immigrant deli worker’s memories of an occupied homeland collided in our different associations with the word “Jewish.”
Writing in quite a different context, legal scholar Kimberlé Crenshaw deploys the term intersectionality to describe such conflicts as “the processes of subordination and the various ways these processes are experienced by people who are subordinated and people who are privileged by them.”  In the intersectional moment of my deli encounter, my t-shirt took on additional, unanticipated meanings.
Our collective history is made of such collisions.  As literary theorist Fred Jameson remarks, “history is what hurts.” Symbols and slogans take on meaning precisely because they are charged with the weight of fraught, painful, and contradictory pasts. They mean different things to different people.  Respecting the power of these collisions constitutes both political good sense and common decency.
The recent controversy over the expulsion of A Wider Bridge members from the Chicago Dyke March focuses on such questions. The claim that marchers were evicted because of their Pride flag featuring the Mogen David has been widely promulgated, even though the three women asked to leave the march were far from the only ones sporting the star or other Jewish symbols.
The Chicago Dyke March controversy takes place at a time when many American Zionist organization are signing onto a broad, right-wing pushback against the use of intersectional analysis in progressive movements.   Equipped with a dubious understanding of what intersectionality actually means, groups like a Wider Bridge and the Academic Engagement Network (AEN)— which advertises itself as an “organization of American college and university faculty opposing the Boycott, Divestment, and Sanctions movement, standing for academic freedom and freedom of expression, and supporting education and robust conversation about Israel on campuses”— understand talk of overlapping identities as somehow threatening to Jews and to Israel.   But the point of intersectional analysis is to illuminate the robust complexity of such conversations.
Inveighing against intersectionality, AEN founder Mark Yudof counterposes “universal values” to intersectional analysis.   As Sam Beck and Dave Zinman point out, objections like Yudof’s are disingenuous. Such interlocutors are far less interested in social justice than they are in shutting down robust, historical discourse. Crenshaw argues that a lack of intersectional analysis can undermine social justice movements. In cases of organizations like AEN, claims of “universality” hide a repressive agenda.
Any symbol is historically fraught, particularly when it is associated with or has been appropriated by nationalism. Consider the stars and stripes of the United States. In the wake of the 2016 presidential election and subsequent articulations of “Make American Great Again” as a shorthand for nativism and white supremacy, the public display of the flag connotes menace. But it is not, always, necessarily, intended that way.
This is where an intersectional analysis can be useful. Far from “making you stupid,” as proclaimed by a widely circulated 2016 piece in Tablet, intersectional analysis is smart politics. Considering the multiple levels of power and identity operative at any one encounter, at a deli or at a protest march allows for political and personal agility. “Universal values” like justice and equality can only be achieved by acknowledging, not ignoring, the brutal and conflicting histories that have brought all of us to this point.  It is more than likely that, rather than conveying the universal value of diasporic persistence as I intended it to, my t-shirt conjured memories of violence and coercion for the young man behind the deli counter.
The friendly collision at the Tiger Bakery made me think hard about my allegiances and identity. It drove me to learn more about Palestine and, ultimately, was one in a thousand incidents in my one Jewish life that led me to publicly oppose the occupation and become an active member of Jewish Voice for Peace.  All of this may mean that the opponents of intersectional analysis are right:  a little understanding is a dangerous thing.  Let us devoutly hope so.
Thanks to Joe Austin and Benjamin Balthaser for their input on this piece, and to the JVP Milwaukee Jew-ish Committee for talking through these issues with me. All mistakes the author’s responsibility.