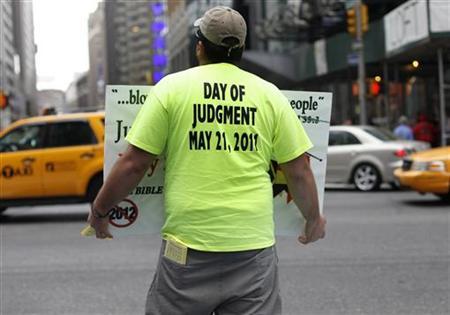 On the End of Days, and how we're still here and all…

For at least two millennia (maybe more?) people have felt as though the end of the world is upon them. Apocalyptic literature appeared on the scene around the 2nd century BCE and continued in the Jewish world until the middle of the Middle Ages and continues to this day in the Christian communities. Certain streams of contemporary Christianity are so immersed in eschatology that the Left Behind series are still the best selling novels in the United States.
It is no wonder then that radio host and self-styled biblical scholar, Harold Camping, has made so many headlines in the last few days.

Starting a year ago or more, Camping, who runs a number of Christian radio stations and two television stations, spent millions of dollars advertising May 21, 2011 as the beginning of the End of Days–needless to say, May 21 came and has almost gone. No word has yet been heard from Camping, who had previously predicted the apocalypse would commence in 1994.
Many have called him a false prophet, and I think that is too generous. There are two possibilities, in my opinion, as to what’s going on with this man. 1) He is an utter fool and a moron; 2) he is a brilliant marketer who has set himself up to increase his personal wealth from over $17 million to God only knows how much he might make. There is a difference between a false prophet and someone who is just plain wrong or an idiot. Unfortunately, there are far too many idiots out there.
First off, let me say that I consider anyone who believes the world will end in apocalyptic fashion to be a fool, moron and idiot. The world is not going to end. Now, anyone who believes someone who believes the world will end, they’re just a whole new level of stupid. I don’t care if we’re talking Y2K, or the Hebrew year 6000, or 2012 in the Mayan calendar or any other end of the world scenario–it’s narishkeit.
It may be instructive to understand that the original conceivers of the genre of apocalypse literature seemed to have been writing about their own time, not some distant date millennia in the future. What’s more, I have no reason to believe that anyone in the ancient world believed it either. Literature is entertainment, those who take writings literally are missing the point.
So here’s what I’ve been thinking about the last week or so as I’ve seen the May 21, 2011 billboards and truck ads and read about Harold Camping incessently in the news for days. Here’s the difference between Christian and Jewish eschatology–the prior is about practical application, whereas the latter is (and I would argue has always been) a metaphorical representation of a utopian future. There have been hiccups in our history where we’ve forgotten that we’re dealing with metaphor–Bar Kochba, Shabbtai Tzvi, Jacob Frank, Menachem Mendel Schneerson (The Lubavitcher Rebbe). We apply a real-life messianism to leaders and become confused when our desires for a greater world conflate with the potential of redemption. Yet, as long as we focus on these prophecies of end times or on false messiahs, we forget that it is our job to bring redemption and we do that by pursuing justice and perfecting Creation.
If Harold Camping had taken his millions of dollars and fed the hungry and clothed the needy, he not only would have been living up to the virtues of Jesus and his disciples, he would have been making real change in the world–but he didn’t do that. He squandered money raised from advertising and spent it on advertising… And now it’s nearly May 22 and he’s still rich and the poor are still poor, and no one has been raptured.
For the life of me, I cannot understand what drives an individual towards believing in this kind of BS. There are people who quit their jobs, left their families and traveled around the country spreading the ‘gospel’ of the End of Days being upon us. And how they have no rapture, no redemption, no income and no life. I can’t say I blame Camping, but he certainly played a part.
Now, what does any of this have to do with us? Well for one, we gave the world the apocalyptic narrative. I’m not sure we realized how later generations would run with it, but it is our gift to the world. So now what…
Well, the fact is there just aren’t that many Jewish eschatologists or messianists (and most of them are fringe Chabadniks). So what do we do with all of this End of Days nonsense? Well, for one, I think we should ignore it as most we can. What gave the May 21 people so much steam was all the attention they received from adherents, detractors and the media. The best way, in my opinion, to neutralize fringe elements is to ignore them. But more importantly than ignoring, we should be motivated in our efforts to heal the world, to bring justice to our nations and secure a peaceful future for the Earth’s inhabitants.
Our messianic narrative has inspired numerous interpretations within the Jewish tradition, however, we have generally steered clear of End Days prophecy. I find this fascinating. Even those Chabad messianists who believe that the Rebbe never died or (even worse) believe that he will return, don’t seem to dabble in End Days predictions. I’m curious what people think–why do Christian eschatologists focus so intently on the rapture, apocalypse and armageddon rather than the return of their messiah? And, I’m also curious–were there to be a Jewish eschatologist swaying others to prepare for the End of Days, would they get as much media attention as the fundamentalist and/or evangelical Christians who hit the headlines? And finally I’m wondering, how many Jews would have been running to get baptized if his predictions were true?

26 thoughts on “On the End of Days, and how we're still here and all…”