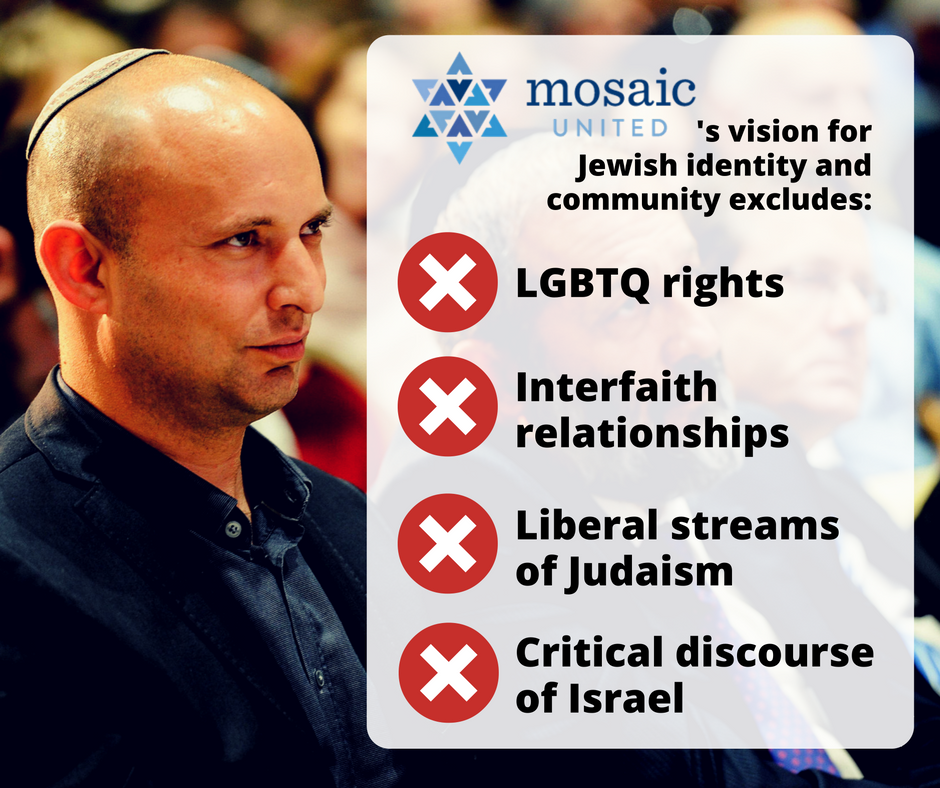 Open Hillel has launched the #OurJudaismIncludes campaign, calling on Hillel International to reject $22 million in funding from Mosaic United, a new project led by Naftali Bennett, Israel’s Minister of Education and Diaspora Affairs.
Mosaic plans to disburse $66 million over two years to Hillel International, Chabad, and Olami Worldwide in order to combat “the weakening of the Jewish foundations of the family unit” and “critical discourse” around Israel. Bennett opposes the recognition of Reform and Conservative rabbis; opposes legalizing same-sex marriage in Israel. As a Minister in the Israeli Knesset (Parliament), he banned a novel featuring a Jewish-Palestinian love story from the Israeli school system and censored individuals and organizations who have challenged his political program. Bennett’s priorities will undermine the value of pluralism at the core of Hillel’s mission and stifle engaged conversations around the Israeli-Palestinian conflict.
The Open Hillel petition reads, “Hillel cannot serve students of all backgrounds if it takes millions of dollars from an initiative that disrespects students’ families and disparages non-Orthodox Jewish practice. Neither can Hillel claim to foster pluralism, inquiry, or real dialogue around Israel if it accepts millions of dollars from an initiative that seeks to censor critical discourse and to impede Jewish students’ ability to learn and question.”
“The best way to develop an opinion on any subject is to engage with those that you disagree with,” said Sonya Levine, a Wesleyan senior, leader in the Wesleyan Jewish Community, and chair of the Open Hillel Steering Committee. “Bennett’s initiative will not only shut down crucial discussion; it will also also promote a specific type of Judaism that will exclude and alienate many students who would otherwise be active in their campus Jewish communities.”
Open Hillel is a national movement of Jewish college students and young alumni working to promote pluralism, inclusivity, and open discourse in Jewish communities on campus and beyond. Leaders of the movement hope that a direct call to Hillel International will encourage Hillel to end its partnership with Mosaic and affirm its commitment to fostering inclusive Jewish campus communities.