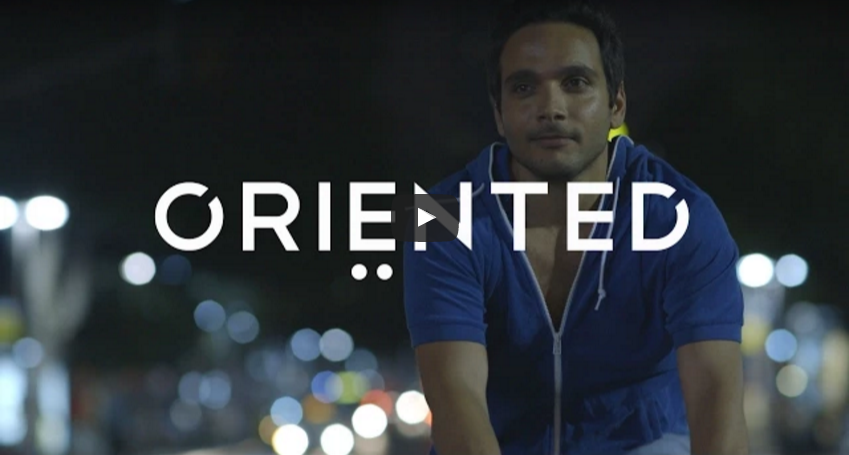 “[Other Palestinian activists] tend to deal with the national issue rather than the social one. They focus on the national and put all other identities aside. But we have a lot of complex identities. There are a lot of issues that people are afraid to confront, and this is our opportunity to play with these identities.” – Fadi Deem
Oriented, a new documentary by Jake Witzenfeld, follows a group of gay Palestinian men as they fall in and out of love, come out to their families, and form an activist collective called Qambuta. Witzenfeld, a British, straight, Jewish resident of Israel, first introduces us to Khader Abu Seif, a handsome and charismatic activist speaking to a group of Jews at Tel Aviv’s LGBT Center. He relates a story of being contacted by a journalist looking for a tragic gay Palestinian who can share the tale of his persecution and woe. Khader explains that he’s actually very happy, well-adjusted, and accepted. Well then, the reporter asks him, can you put me in touch with such a Palestinian?
The anecdote sets the tone for the ensuing film, which attempts to demonstrate the diversity of gay male Palestinian experience within a hopeful framework suitable for the “It Gets Better” generation. Khader’s life is centered in Tel Aviv, where he lives with his Jewish boyfriend David. Together with his friends, Fadi Deem and Naeem Jiryes, he struggles with the meaning of Palestinian identity within the privileges of Tel Avivian comfort. Along with their friend Nagham Yacoub, they create Qambuta Productions with the goal of creating viral videos that might help other Palestinians understand their challenges — and unite those in similar situation with a message that they’re not alone. Along the way, we get musings on the difference between life in Palestinian villages and Israeli cities, see Naeem struggle with coming out to his parents, and watch Fadi grapple with the intersection of the political and the personal when he falls for a Jewish Zionist.
[pullquote align=right] Suddenly Qambuta can no longer deal strictly with questions of queer identity, and the film gives us a chance to watch these friends debate how exactly to take their nationalist stand.
[/pullquote] The film takes a sharp turn 30 minutes in when the kidnappings and murders of the summer of 2014 begin. Suddenly Qambuta can no longer deal strictly with questions of queer identity, and the film gives us a chance to watch these friends debate how exactly to take their nationalist stand.
In a taut 81 minutes, Oriented paints a fairly three-dimensional picture of these three men and their relationships with the societies they straddle. While religion is mentioned at times, it’s clear that both the Jewish and Palestinian worlds in which the men operate are secular. The film directly addresses some of the claims that Zionists make about Israel as the only safe place for Arabs to be gay in the Middle East by taking us inside supportive Palestinian families and even a massive dance party across the border in Jordan. We see the central trio struggle with the politics of occupation, acknowledging how they benefit from living in Tel Aviv even as they lament the increasing distance they feel from the Palestinian communities of their birth, and even more from those living in the West Bank and Gaza. By focusing equally on the men’s friendships and romantic lives as much as their activism, the film refuses to let the men become merely political symbols.
The film is not without its shortcomings. Nagham Yacoub seems fully integrated into both the friendship and production company the three men share, but she is pushed to the margins of the film, presumably because she is not a man. The subtitling repeatedly “translates” the word Jewish (even when spoken in English) as “Jewish (Israeli),” which invites the question of whether the subtitler is explicating subtleties or adding apologetic commentary. Perhaps most damaging to the film’s point, we see much of the benefit these men enjoy for living under Israeli rule but only hear references to the dark side of life under occupation, which significantly undermines the men’s political activism.
Oriented screens in New York as part of the Other Israel Film Festival three times between November 7 and 10 at various locations. Visit the festival’s website for times, locations, and tickets. The film is also playing this week in Leipzig, Germany, as well as next month in both Brussels, Belgium, and Los Angeles, CA. Visit www.orientedfilm.com to learn more about viewing or hosting a screening in your community.
Editor’s note: an earlier version of this post referred to director Witzenfeld as an “oleh from England,” which is incorrect. He is a British citizen residing in Israel.

One thought on “Oriented: New Documentary about Gay Palestinians in Tel Aviv”