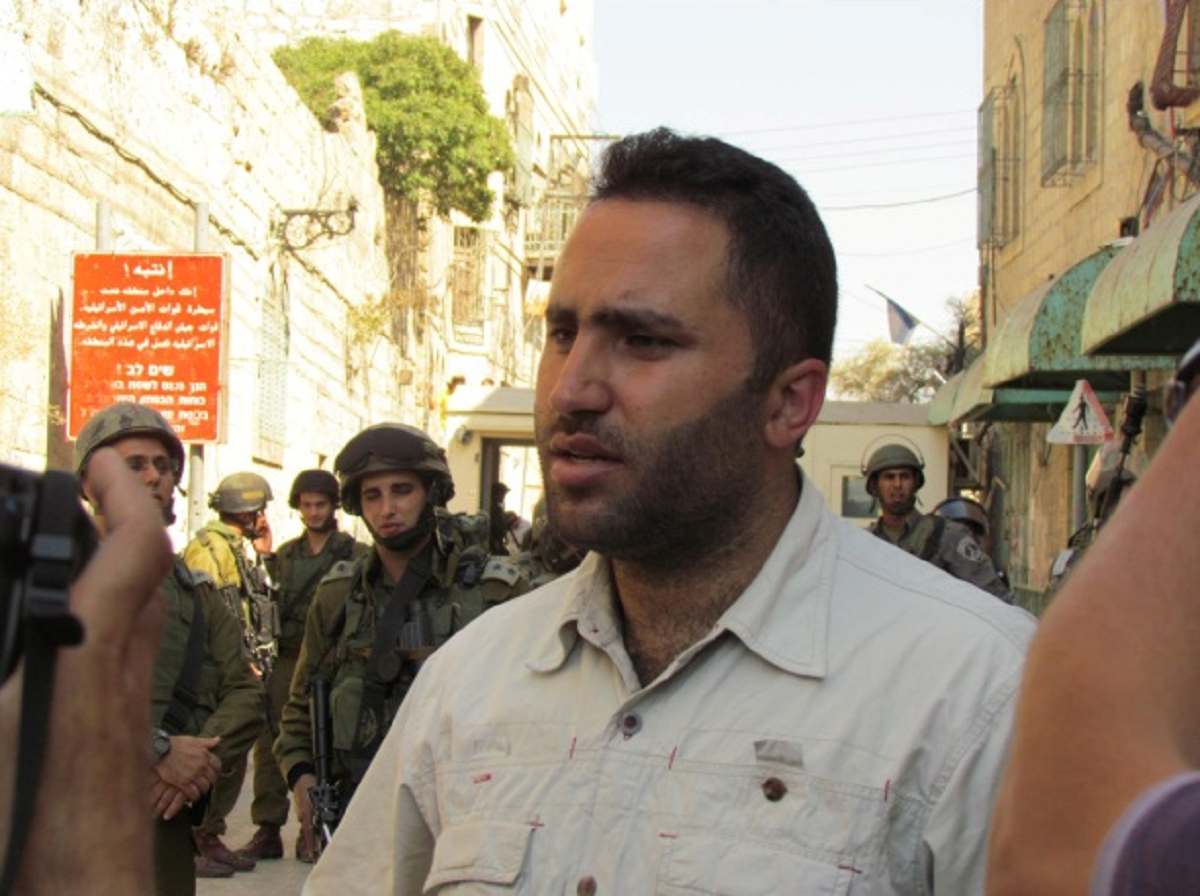 [pullquote align=left] If ‘keeping the peace’ is a euphemism for enforcing a system of segregation and oppression, then I’ll gladly join Issa Amro.
[/pullquote]Today on Wednesday, November 23, Issa Amro (pictured above), an internationally recognized human rights defender and founder of Youth Against Settlements, appears in a military court to answer trumped up charges of illegal demonstrations, entering closed military zones, and arguing with an Israeli soldier who took Amro’s identity card. In other words, Issa now faces serious criminal charges for the “crime” of refusing to submit to an occupying force.  All through nonviolent acts.  All in opposition to the reality that the Israeli government controls the comings-and-goings of millions of Palestinians living under occupation in the West Bank.


I was with Issa this summer for a civil rights project the Israeli army considered a ‘disturbance of the peace’: converting a piece of privately owned Palestinian property into a movie theater, at the request of the property’s owner. In July, Issa and I were two of more than sixty Jewish and Palestinian nonviolent activists hard at work on this simple, if labor-intensive, task of solidarity. After less than an hour of shoveling debris and carting off unused factory material, a dozen Israeli soldiers arrived and immediately declared the site a ‘closed military zone.’   A closed military zone is the army’s go-to tactic to shut down any activity of any type, on any piece of land in the West Bank, fully at their discretion.  When the army declared the factory a closed military zone, what really happened was the presence of soldiers trespassing on private property and forcibly detaining us.
Six members of our group were detained, while the rest of us were forcibly removed from the property the soldiers and police.   The movie theater, which would have been the first in a city of more than 200,000 people, remains unfinished.  According to the official IDF spokesperson, we were “disturbing the peace.”
The ‘peace’ the current Israeli government wants is one in which Palestinians in the West Bank quietly accept lives of grinding discrimination under Israel’s military occupation.  In Hebron, to keep this ‘peace’ the army maintains  segregated streets  where Palestinians are not allowed to walk or drive while settlers have exclusive access.  Throughout the West Bank, ‘keeping the peace’ means quashing nonviolent dissent – marches, sit-ins, or attempts to ride segregated Settler-only buses – with tear gas and rubber bullets.
Issa Amro’s indictment, as Sarit Michaeli wrote in a B’Tselem statement about Amro’s trial, “is part of a broader Israeli policy in the Occupied West Bank to prohibit all Palestinian protest against the occupation…The indictment served in this case demonstrates how Israeli authorities do not consider any form of Palestinian resistance against the occupation as legal.”
Issa Amro is not the first Palestinian to be targeted by the Israeli government for his nonviolent activism.  Back in 1988, Mubarak Awad was deported under the orders of then Israeli prime minister Yitzhak Shamir for advocating marches, sit-ins and other civil-rights style nonviolent protests.  In the years since, hundreds of Palestinian-Gandhi’s have been arrested and convicted for nonviolent ‘offenses’ as minor as raising a Palestinian flag and exercising their freedom of expression.
I was raised to believe that Israel wanted peace, while Palestinians bore the blame for any unrest in the region.  I didn’t know, then, that Israel’s definition of ‘peace-keeping’ included suppression of nonviolence.  I didn’t know that peaceful activists like Mubarak Awad and Issa Amro are targeted for community organizing and human rights activism.  I didn’t know that Palestinians in the West Bank are tried in Israel’s military court while Israeli settlers are tried in civil courts. And I certainly didn’t know that 99% of all Palestinians tried in Israel’s military courts are convicted.  That’s not the kind of peace I was raised to believe in.  Israel’s military prosecutor should immediately drop the immoral and trumped up charges against Issa Amro and all other human rights activists.
If ‘keeping the peace’ is a euphemism for enforcing a system of segregation and oppression, I’ll gladly join Issa Amro and all other human rights defenders who follow the footsteps of civil rights heroes and refuse to accept the status quo by disturbing the peace.