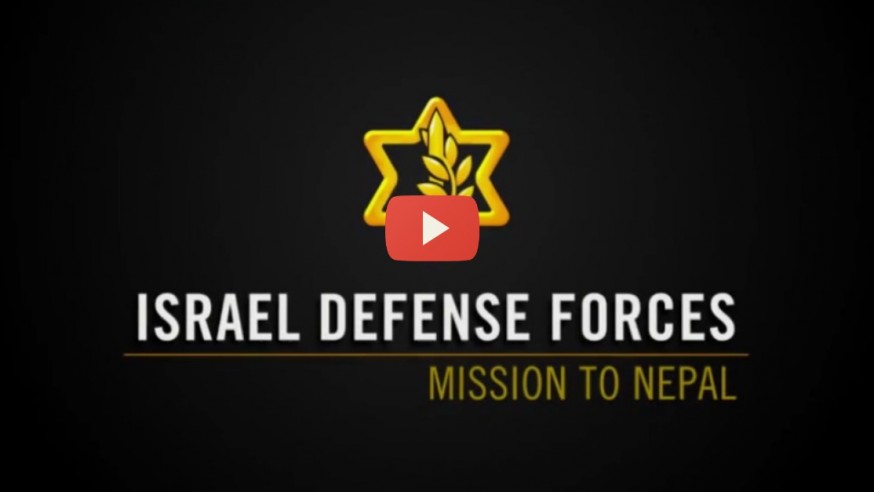 Rambam Smoothies for Nepal and Gaza

“Dad, we want to sell smoothies and raise money for Nepal.”
Other than my knee-jerk parental shift to “Do I really want to be washing blueberry skins out of the blender and cups at 8:30pm on a Monday,” these were musical words to my ears.  Every parent wants to hear their children thinking about others and showing glimpses of the adults they may become, and I am no exception.
I did discuss with them the idea that, living in D.C., we should consider helping our neighbors just to the north in Baltimore.  They hesitated just a bit because my older son’s class, and indeed their day school as a whole, has been focused on the tragedy in Nepal.   Eventually, though, they agreed, and $19 and a lot of dish soap lately, we could feel good about a night well spent.
Yet as the frozen mangoes and bananas spun, their hesitation got me thinking about what I had been seeing on social and actual media all day.  To the differences between distant and local, between what we can take credit for and what is anonymous, between immediate and long-term.
In other words, we were serving up Rambam smoothies.
On one hand, there were endless stories about Israel and Israeli assistance to Nepal.  Some of them focused simply on the facts about what Israel has been giving, which is substantial, multi-faceted (medical clowns!) and altogether inspiring.  [pullquote] Our community deserves to be proud of the immediate and immense level of emergency response, and undoubtedly the people of Nepal will have a level of connection and gratitude for years and decades to come.
[/pullquote] Even if they don’t, we will know it to have been true, and we know some of it will simply continue admirable efforts underway for many years before the earthquake.
What first struck me in connection to my son’s uncertainty about including Baltimore was the undercurrent I had seen in some of this reporting that could be summed up as, “See, look at us and aren’t you amazed at how much we are giving” and then in people posting those articles, “See, nobody gives credit to [Israel]/[the Jews] when we do this.”  Or, worse, still “See, we should stop doing this until Israel gets some credit” (this from a Jewish “leadership” blog).  This bothered me as a bit unseemly and somewhat counter to the spirit in which the assistance was, or at least I imagined should have been, given.
To boil it down, Nepal is the center of world attention, a tragedy of immense proportions, and nobody’s “fault.”  Are those the ingredients needed for a response like this, I wondered?  Again, Thank G-d absolutely and unequivocally for its being there.  But.  While I may come down far from the alleged gall of at least one or two BDS supporters in apparently giving Nepalese victims the outrageous advice to boycott Israel’s assistance because it’s covering up bloodshed in Gaza, I wondered if there was more to the story.  I started to follow my boys and hesitate.
What struck me next was the juxtaposition of Nepal assistance with the initial reporting about the new Breaking the Silence series of Gaza testimonies from IDF soldiers documenting a range of concerning acts and policies that marked Gaza 2014.  This question of “Yes to Nepal, but what about Gaza?” had been asked by Ha’aretz almost right away based simply on the comparative levels of destruction, but adding the element of soldier testimonies of bad actions to the news of just how devastated Gaza is took the question of responsibility for assistance to a different level for me.
Like my son’s reaction to Baltimore, our response to assistance to Gaza as a Jewish community is much more uncomfortable and admittedly complicated.  It may always be easier to give to someone far away, with whom you are not in conflict, and from whom you will be thanked loudly and without qualification.  But that does not get us to what is needed.
These are hard but necessary issues to throw in to the proverbial smoothie blender, and I will admit to not being sure what exactly it all means.  Luckily, Moses Maimonides (Rambam) can help a bit.  In particular, back in the 12th century he laid out his levels of Tzedakah, and they are strikingly useful in these cases.  As explained by the Jewish Virtual Library:

Maimonides defines eight levels in giving charity (tzedakah), each one higher than the preceeding one.

On an ascending level, they are as follows:

8. When donations are given grudgingly

7. When one gives less than he should, but does so cheerfully.

6. When one gives directly to the poor upon being asked.

5. When one gives directly to the poor without being asked.

4. Donations when the recipient is aware of the donor’s identity, but the donor still doesn’t know the specific identity of the recipient.

3. Donations when the donor is aware to whom the charity is being given, but the recipient is unaware of the source.

2. Giving assistance in such a way that the giver and recipient are unknown to each other. Communal funds, administered by responsible  people are also in this category.

1. The highest form of charity is to help sustain a person before they become impoverished by offering a substantial gift in a dignified manner, or by extending a suitable loan, or by helping them find employment or establish themselves in business so as to make it unnecessary for them to become dependent on others.

Remarkable prescience.
Regardless of one’s view about whether Gaza was justified or not, there should be little question that at least some extent of the destruction there, and the actions committed by some Israeli soldiers, are Israel’s responsibility, just as I argued in my last post that the bad actions of some white police officers in Baltimore and the gripping poverty and lack of education are a responsibility of the white community.  There may be myriad differences as to the causes and solutions of these situations, but the underlying, if uncomfortable, truth is that we do bear responsibility for both.  Just as much of the conflict in Baltimore was created by the choices of the white community, we know that some of what happened in Gaza was choice, condoned not just by the individual soldiers but the Israeli leadership and society that sent them there.
The closer the issues to us geographically, causally, and socially, the harder and messier the work will be.  Which makes it harder to motivate ourselves to do something.  This is likely why Rambam placed that type of help where he did, at the top of the order.  As I read his work, our assistance in Gaza could meet the highest level of tzedakah, just like my boys could by doing work in a place like Baltimore. [pullquote] In both cases, if multiplied and done with empathy and the right amount of care, this work would help prevent future strife and make the world a different, and a slightly more repaired, place.
[/pullquote] Perhaps some of the admirable responsibility Israel has taken on for Nepalese victims, which, depending on your reading, ends up somewhere between #3 and #5 on Rambam’s list, must also be extended to Gaza.  Not instead of, but in addition to and in connection with.  The specific actions and amounts may be different (I doubt Israeli medical clowns would accomplish much in Gaza), but the underlying acceptance of responsibility needs to be there for us to reach higher.
So let us take Rambam’s lessons to remind ourselves, and our children, of how, where, and when to give, what to expect in return, and when to push ourselves to face and do what is hardest.
Let’s give to the next Nepal, but only when we are ready to take responsibility for the next Gaza and Baltimore.
That’s a Rambam smoothie my boys and I would happily drink.

2 thoughts on “Rambam Smoothies for Nepal and Gaza”