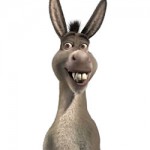 Remember that “modern haggadah” of the Passover story, told via a facebook feed? It was a cute graphic, but what’s coming today is much more exciting:
From 11:00 – 12:30 California time, Jewschool’s own Balaam’s Donkey will be joining the other key characters of this week’s parsha (next week’s for some folks) to create a collaborative dialogue on Parshat Balak via Twitter. The characters will be played by a group of students at Brandeis Collegiate Institute.
Everyone is encouraged to following them on Twitter by searching for #balak. Many of the “users” even have icons to match: @BalaamsDonkey1, @KingBalakofMoab, @AngelofHashem, @TheIsraelites, @PinchasBEleazar, @BalaamSonofBeor, @ParshatBalak, @TheDignitaries. Folks are invited to follow these users and get in on the conversation.
Who else is super excited for the talking she-ass?