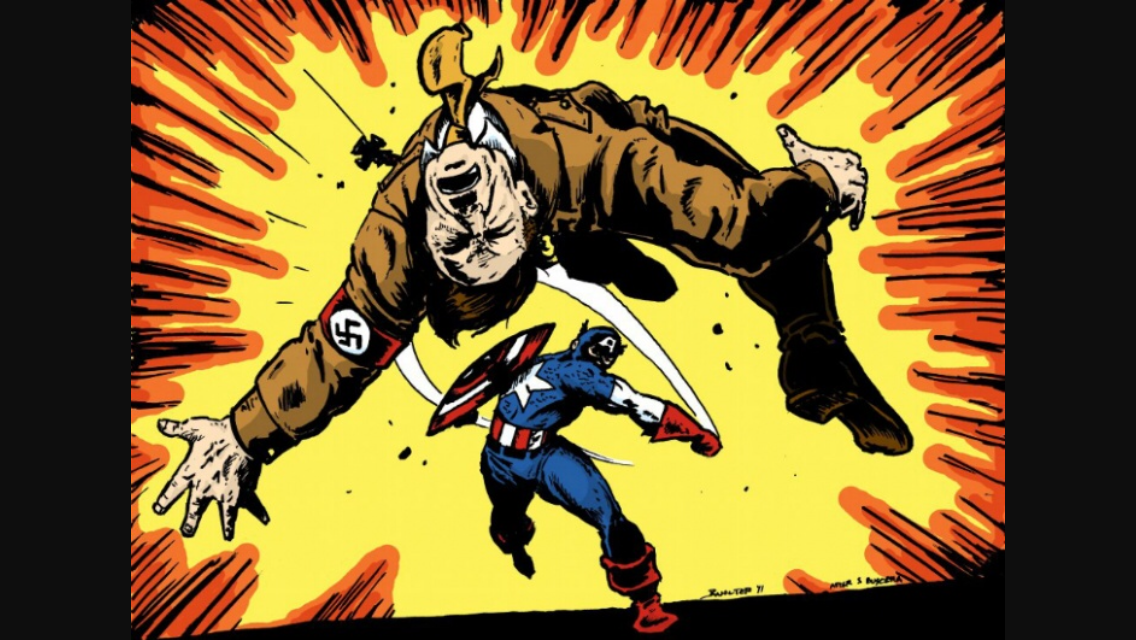 January 23, 2017May 4, 2018 by TheGlitteryRebbetzin
[pullquote align=right] Does Nazi speech present a clear and present danger to us?
[/pullquote]I don’t know whether it’s the breakdown of society or Captain America coming to rescue us.
There’s a video of a person punching Richard Spencer in the middle of an interview during the anti-fascist march in D.C. on January 20th, a day before the Women’s March.
Richard Spencer popularized the term “alt-right” and advocates for America becoming a white homeland via “peaceful ethnic cleansing.” There is video of him lifting his arm in a Nazi salute.

He is, in short, a Nazi.
And there is a video of him getting punched in the head.
Many of us progressive peaceniks are feeling conflicted about this. Violence is never acceptable, but…
[pullquote align=left] Also, Spencer is a shmuck.
[/pullquote]But does Nazi speech present a clear and present danger to us? To our families? To society? At what point is this defense?
Spencer’s speeches and ideology incite others to violence. Is he like a commanding officer who charges others with his dirty work? What does it mean to intimidate people who would be inspired by him? What does it mean to intimidate those people by violent means?
Also, Spencer is a shmuck. Is it wrong to enjoy the fact that he was punched in the head? Is it okay because it was just one person, and it was just one punch? Is enjoying watching this video a guilty pleasure?
Yes. Yes it is a guilty pleasure. And yes, it is Captain America coming to rescue us. And yes, it is the complete breakdown of society.
[pullquote align=right] This is vigilante justice.
[/pullquote]This is vigilante justice. When he was punched, Spencer was not acting violently nor was he posing a direct threat to anyone.
The fact that we cannot shut this man up with words alone is a problem.
When we secretly root for the Black Bloc to punch people but when they are charged with felony rioting immediately thereafter, when we don’t feel like we can rely on our justice system for a fair trial, when we don’t feel like existing laws protect human beings but instead protect giant corrupt corporations—we’re all in trouble.
And comic book superheroes are not the answer.