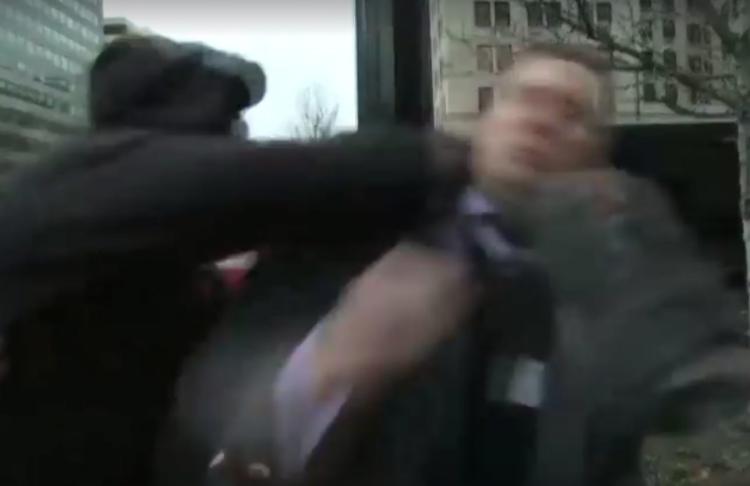 On The Punching of Richard Spencer

January 24, 2017May 4, 2018 by eliungar
[pullquote align=right] I am not a pacifist.
[/pullquote]If your politics look anything like mine, this past weekend was a roller coaster of emotion. Watching Donald Trump take the oath of office on Friday was one of the low points of my life while marching in solidarity with millions of women on Saturday was one of the high points.
But one incident and the reaction to it caught me completely off guard. On inauguration day, while giving an interview to an Australian news crew, Richard Spencer was punched in the face on camera by a masked protester. The video went viral and to my genuine surprise, a very large proportion of my friends shared it with a heady mixture of glee and approval. People who I consider to be some of my closest friends in the world went further than expressing mere schadenfreude and argued that this action was morally justifiable.
https://youtube.com/watch?v=9rh1dhur4aI
The first thing that needs to be said here is that punching people in the face for holding or expressing a political belief that you disagree with is wrong. I am not a pacifist. I believe that there are situations in which violent force is the morally appropriate behavior. But Richard Spencer standing on a sidewalk giving an interview is not one of those situations.
[pullquote align=left] The threat posed by the person in question can’t be theoretical.
[/pullquote]To sidestep this seemingly obvious moral intuition, many of my friends have been trying to articulate a version of a self-defense argument. That’s generally what people promoting unjustified acts of violence do, because establishing that the target is a legitimate threat is a necessary step in justifying violence against them. But to really make a self-defense argument work, the nature of the threat posed by the person in question can’t be theoretical. And the further away from clear and present danger that you get, the less defensible the violence is. If Spencer, for example, had been in the process of physically harming a bystander, punching him could easily be justified on the grounds that it was needed to defend that individual. If Spencer were in the planning stages of a hate crime against a Black church, we could try to make the argument that violently attacking him was the only way to protect those people, although here it would be a heavier lift. But who exactly was being defended by the sucker punch seen around the world?
“Ah, but, Eli, some ideas are so dangerous that they must not be given room to breathe and Spencer has been espousing just this brand of ideas!” I agree that some ideas are dangerous and I further agree that Spencer has been recklessly promoting such ideas. That’s an argument to not give him air time. Maybe even an argument to hack the feed and block transmission of the interview. But it’s not a compelling argument for punching Spencer in the face.
[pullquote align=right] Spencer is many things, but he is first and foremost a media whore.
[/pullquote]Beyond the fact that this punch was morally indefensible, it was also incredibly stupid. Spencer is many things, but he is first and foremost a media whore. He loves the attention his movement has been getting ever since the election and this incident has just brought more attention to him and his fascists, thereby spreading their dangerous ideas further. Moreover, we’ve seen this movie before. Violence begets violence and whatever chilling effect the defenders of this behavior were hoping for will very quickly lift and the inevitable ensuing escalation will disproportionately threaten our most vulnerable communities.
One of the most astonishing aspects of the Women’s March, which is now being called the largest protest in U.S. history, is how non-violent the whole thing was. Millions of people had their voices heard without anyone getting hurt or arrested. I can’t help but think that a big part of the support for “punching Nazis” comes from a kind of unexamined toxic masculinity that many of us carry around. As a cis guy, I have been thinking a lot lately about the reductive masculine archetypes available to us and it seems to me that on some level support for this behavior constitutes a sort of frustrated, pathological assertion of masculinity. Which ironically, is something that some on the anti-fascist Left and many on the alt-Right seem to have in common.