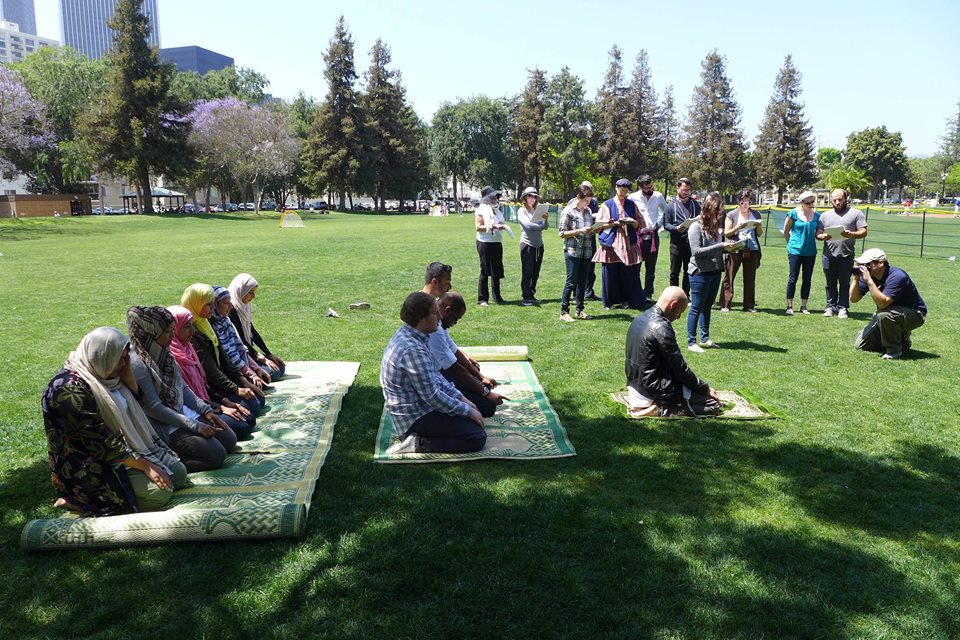 Resist the Muslim Ban: 10 Steps to Allying with Muslim Communities

I had a vague sense of where the closest mosque was, but a quick search revealed it to be much more than that, including a school, community center, and medical clinic.

2 – Reach out as an individual/family, not as an organization.

Organizations and their leaders can have a wide range of interests, programs, and leadership dynamics and styles. We’ve found it much more powerful not to be connecting as one organization to another, but one set of families to another.

It was not the easiest way to start a call, especially in an era of threats. But I started by simply saying who I was, where I lived, and that my wife, sons, and I were worried about the potential threats that a Trump presidency may unleash. And that we wanted them to know we would stand with them and hoped we could get to know their community better.

4 – Don’t be pushy, but see if there is interest in connecting.

We actually reached out to a few mosques/community centers, and some of them said “Thanks for your support; we have many friends standing by us now and are pleased to count you among them.” But they were not interested in more, which was fine.  Thankfully one was.

5 – Pay a visit; find some friends to join you, but not too many. Don’t rush it.

[pullquote align=right] We did not make speeches, impose our pre-formed ideas, or propose an agenda. We simply wanted to learn more.
[/pullquote]In our case, my family and I visited first, and we then after establishing the connection, we reached out to a group of friends and community members from across denominations. You could simply arrange a group visit to start as well. It took a bit of time to get these organized, but you can’t be too hasty and have it work well.

6 – Be humble and simply ask questions.

Show up ready to listen and learn. We were fortunate to have members in our group who had studied Islam and knew some Arabic, and although this helped, it was not needed. Even those among us who did have this background simply asked questions. We did not make speeches, impose our pre-formed ideas, or propose an agenda. We simply wanted to learn more.

We were fortunate to observe afternoon prayers. This deepened our connection greatly because we were now able to get beyond the immediate issues and find bridges on the spiritual levels.

Most of us who visited brought our children, and we timed our visit to coincide with the end of classes for the Muslim students. We came together with snacks, sat in a circle, and prepared to begin some activities. But it turned out the kids had lots to ask and say. So we let that unfold, put the activities to the side, and let the kids bring us much closer together than any other format likely would have.

[pullquote align=left] Our kids are scared…So this is our responsibility as parent to keep our children and our communities safe.
[/pullquote]It is not clear what comes next, but we are working slowly to develop next steps. We jumped at the chance to deliver mishloach manot but didn’t over-think it. Many ideas have emerged, but these are relationships to develop over many years, not race through.

10 – Let your connections expand your communities.

As mentioned, thanks to this connection to the Muslim community, my family and I learned about a vigil being organized by a local group of Indian-Americans. We ended up one of the few white families there, and in what was a week filled with a focus on threats to the Jewish community, it felt good to be standing with others.
These are reflections based on one experience, of course, and one that continues to build slowly. But we don’t have time to wait or worry about whether our politics will ultimately line up. Mosques are burning, Jewish cemeteries and community centers are being attacked, and people are being threatened and killed.
Our kids are scared, and our leadership is failing. In fact our leadership is often what is making us scared.
So this is our responsibility as parents, and as people – to keep our children and our communities safe. Follow these steps, create your own, but do something. In the end, this is what will protect us from hatred abroad, at home, and from the White House.