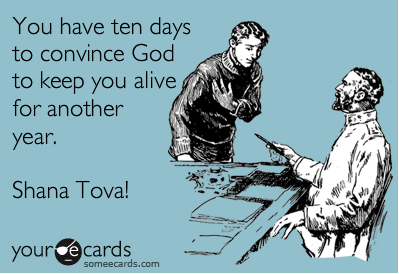 Rosh Hashanah Has Nothing to do with Comics

Jewish educator and comics critic David Wolkin digressed from his usual lampooning of graphic novel misfires to muse meaningfully on the new year. The post has, decidedly, nothing to do with comics and thus we happily repost it here.
Yesterday was the first night of Rosh Hashanah, the Jewish new year. It’s can be a weird thing to have to have two different New Years (yearses?), especially when the second one usually overlaps with the start of the school year. As someone who works in the Jewish community and in a school (this is what I do!), this is undoubtedly a stressful time for me. It can be a challenge to get into the celebration, to not have it feel like work, because for me, it is work.
So that’s one piece of this and I suppose I’ve learned to deal with it in my own way, by viewing it as a second opportunity per year for reflecting on what I’m doing right and what needs work in my life. Ultimately, this is a time of reflection for Jewish people and their loved ones. Rosh Hashanah begins the new year on the Jewish calendar, but it also is the first day of what we refer to as the Ten Days of Repentance, which ends on Yom Kippur, the Day of Atonement. This is basically a ten day period in which we’re asked to reflect upon our sins of the past year and do whatever we can to repent for them.

(Thanks to David Levy for making this up, though he did commission me to write it for him.)
It may seem pretty flip, but this appears to be the traditional mindset on the matter. There’s an underlying piece that suggests to us that if we don’t properly atone for our sins, then our lives are not, let’s say, “guaranteed” in the year to come. At least, that’s how it was always taught to me.
This is a pretty intense idea, and it goes without saying that when I first learned about it in about first grade, I was downright terrified by the whole thing. I didn’t know how to repent properly, and I’m pretty sure I still don’t, so every year at the end of Yom Kippur I wondered if I had really been sealed in the so-called “Book of Life“.
Obviously I’m still alive, despite my failed attempts at proper repentance, but I still struggle with this stuff a whole lot. And since the word Yisrael translates to “one who struggles/wrestles with God,” I’m pretty comfortable with it at this point. It’s a valuable thing to embrace ones spiritual challenges, and living a Jewish life in the modern day is filled with them.
So I’ve spent a lot of time trying to figure out this whole repentance thing over the years, and I’ve gotten better at it…I think. The enormity of the ideas behind Yom Kippur are really tough for me. If you look at the language of the prayers themselves, they’re pretty scary. Here’s a selection from the Unetanneh Tokef prayer:

See what I mean? By the way, this prayer is also the inspiration for “Who By Fire?” by Leonard Cohen. Check it out:

I’ll be honest, I can’t say this prayer. I understand the point of it, the origin of it, the intention, the meaning. I still can’t do it. I leave it to others to connect to this and I commend them for doing so. Either way, I decided it was up to me to find a way into this day and these concepts, irrespective of my own personal issues and theology (or lack thereof).
So I created this writing exercise about two years ago. It may be equally as intense as the message embedded in the prayers of Yom Kippur in it’s own way, but I find that it brings these ten days down to earth for me. It personalizes the reflection; I’m no longer worried about the wrath of a judgmental god, but instead I’m concerned with the decisions that I’ve made in the past year and how I’ve affected the people around me.
I don’t always write everything down, but I look at this exercise and it gets me thinking, and in each of the past years I compare it to the year before. How many of the same mistakes have I made? Have I wronged more people than last year? Fewer? Were my transgressions against my life and the lives of others bigger or smaller? Will I have the strength to reach out to the people I’ve wronged and apologize to them?
Yeah, it’s tough. It’s an intense exercise for me, but I find that it’s gotten me into the reflective spirit of this season more than anything that’s ever been offered to me by the traditional avenues. Moreover, I really believe that this type of thing can be powerful for anyone. You don’t have to be Jewish to be taking a look back at your own life like this. If there’s anything I’ve ever really cared about as someone who teaches Judaism for a living, it’s the possibility of making this sacred tradition accessible to anyone who is interested.
So here it is, in it’s (mostly) original form as an email that I wrote to my dad, though I did add a question or two, which aren’t written in any particular order. I also see how it could use more questions beyond the ones that I’ve conceived. Parts of it will be redundant, but I’ve never really wanted to change this from the way I originally wrote it down two years ago.
I’d love to know what you think of it, especially if you decide to do something with it for yourself.
Writing exercise starts below:
Ever since I’ve been young, I’ve been really uncomfortable with the notion of the 10 days of repentance. not in the concept itself, per se, but i suppose how it presents itself in the liturgy. The whole idea of being inscribed in a book of life in the coming year, and what is implied if someone is not, along with the idea that at some point during these holidays, the proverbial door has closed on you and your chance to repent and make good for the coming year. I was in the middle of helping run an activity yesterday, and this whole way of reconceiving it through a personal writing activitiy kind of just hit me really hard, so i decided to write down the prompts. I was still answering the first question when i had to return to my work, but others to whom I’ve shown this piece think its interesting, if not a little intense.  As far as I’m concerned, it’s less intense then a divine judge sitting upstairs and deciding whether you’ll making it through the coming year, and places the whole repentance process completely in the hands of the beholder. so here goes:
Imagine if you had to spend 10 days in a room confronted with all of your sins/mistakes/wrongdoings of the past year:
1. What would that room look like? How big would it be?
2. Who or what would be in this room? Would there mostly be people in that room? Actions? Thoughts? Decisions? Ideas?
3. What what you say to them/what would they say to you?
4. What would it feel like to spend 10 days in there? Could you handle it?
5. What would you do with the time that you had in there? What would you address first, last?
At the end of those 10 days, whatever you do, it’s time for you to leave that room and close the door for the next year. But don’t close it all the way. Leave it just a little bit ajar. You may have done all you can, but accept the fact that come next year, you might re-enter that room and be confronted with some of the same things. And Yom Kippur comes along, you can be the one closing the gates, writing the book. You don’t have to let God make all of the decisions, since at the end of the day, so much of it is completely in your own hands.

2 thoughts on “Rosh Hashanah Has Nothing to do with Comics”