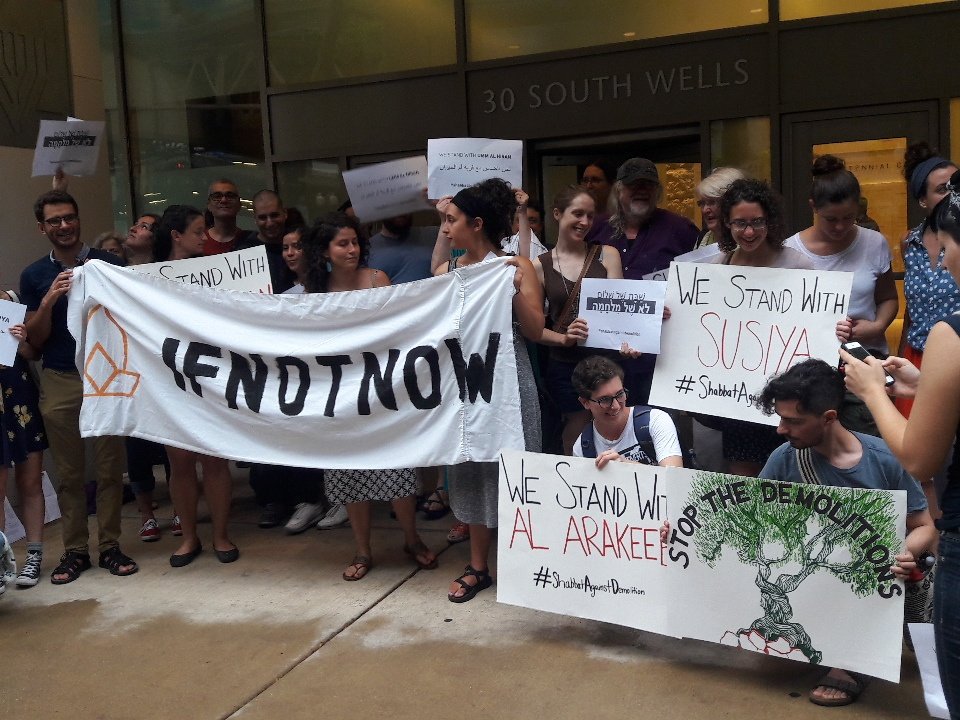 Last night, young Jews in over 15 cities in at least five countries hosted Shabbat dinners and protests in front of Jewish institutions and Israeli embassies in urgent protest of demolitions slated for four Arab villages in the Negev and West Bank on Monday. Events were held in Jerusalem, NYC, London, Melbourne, Pittsburgh, Chicago, the Bay Area, North Texas, Ithaca, Tuscon, DC, Cleveland, Israel, and the West Bank village of Susiya.
Organizers with All That’s Left: Anti-Occupation Collective, the Center for Jewish Nonviolence, and T’ruah urged young Jews around the world to help prevent the demolitions:

As Jews, we say emphatically that forced displacement, dislocation, and demolition do not represent our values. These demolitions represent a continued policy of systematic discrimination. As members of a people who have experienced expulsion, persecution, and dispossession, we stand with all Palestinian communities facing eviction.
Residents of these villages have called on us to mobilize our communities in their support.

The demolitions were scheduled for Al Araqib to build a future JNF forest, Umm El-Hiran to make room for a new Jewish town, as well as Susiya and Um Il-Khier. In Susiya, one of the villages slated for demolition, a resident told attendees, “Seventy-five years, I gave birth to my children here, and I just want to live a normal life.”
B’Tselem, the Israeli information center for human rights, issued a statement earlier in the week, saying:

The spate of demolitions in the West Bank continues in full swing: in the past week and half, since the beginning of August 2016, Israel’s Civil Administration demolished 20 homes and 13 other structures in Palestinian communities throughout the West Bank, leaving 53 people – including 25 minors – homeless. In total, Israel has demolished at least 188 Palestinian homes in the West Bank this year – the highest number since B’Tselem began documenting home demolitions on grounds of “lack of building permit” in 2006.

In recent days, Jewish organizations across the liberal spectrum have also gotten involved. J Street issued an action alert to Defense Minister Avigdor Lieberman and JVP sent their own to Secretary of State John Kerry. On Thursday, New Israel Fund sent a letter to the Defense Minister as well.
See below for photos and livetweets of last night’s global #ShabbatAgainstDemolition events.