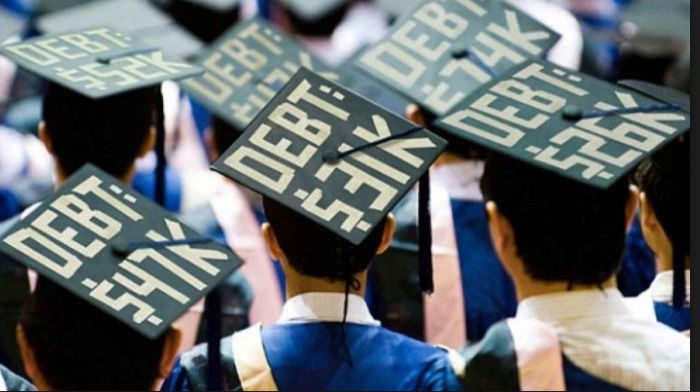 Abby McCartney is a policy advisor and strategist focusing on education and issues affecting children and families. She is a lay leader at Kol Tzedek Synagogue in Philadelphia and formerly served as a legislative aide to Senator Elizabeth Warren (D-Mass.).

This is a story about daring to take the Torah literally.

This year in the Jewish calendar is a shmita year, the seventh year in a seven-year cycle, a year of release. In the shmita year, we are instructed to let the land lie fallow and to “practice remission of debts.” (Deuteronomy 15:1)

Until recently, I was a policy aide for Senator Elizabeth Warren. One of my main responsibilities was to work on student loans, including the push to cancel student debt.

I admit that I came to this position as a skeptic. It seemed like a one-time fix to a long-term problem. If we cancel student debt today, won’t we just be back in the same position in a couple of years?

Each of these individually is a solvable problem. The Department of Education can improve many of the rules of these programs, such as when interest is waived and which payments count toward forgiveness. They can insist that loan servicers take the time on the phone to give better advice.

Every individual tweak matters. The Department of Education announced changes to the Public Service Loan Forgiveness program in October that have already resulted in $2.4 billion in loan forgiveness.

But taken as a whole, the student loan system is a broken mess. And for borrowers, one setback or mistake has a way of snowballing into what can feel like a life sentence of debt.

This broken system doesn’t affect everyone equally. Black students borrow more to attend college and have a harder time paying their debt off afterward. Twenty years after starting college, the median white borrower owes 6% of the balance of their loan. The median Black borrower still owes 95%.

We hold out higher education as the path to opportunity, but in reality, it’s making our country’s racial wealth gap worse.

This is where we need the wisdom of shmita. Debt can be a very useful economic tool, but it’s also a dangerous one. There’s a real risk that people get buried and can’t find their way out. And that risk doesn’t hit everyone equally – it tends to exacerbate the inequality that’s already there.

So every seven years, wipe it clean. Start over. Give us a chance to build something new in its place.

What I’ve learned from working on student debt and from studying shmita is that sometimes a one-time fix is exactly what we need. In a world with so many interlocking, reinforcing injustices that have built up over decades, doing better in the future isn’t enough. We owe relief to people who trusted the system and had their trust violated.

The Torah is full of rules on how we should make restitution with one another, individually. Shmita is a way of setting things right systemically.

On a very practical level, canceling student debt would transform the student loan system. Cancelling $50,000 of student loan debt would wipe out federal loans completely for 84% of borrowers. It would begin to narrow the racial wealth gap. With a much smaller group of borrowers, there would be a real opportunity to build a new system from the ground up – one that makes repayment manageable and fulfills the promise of the debt relief programs that have failed so many people.

That system could serve future borrowers better. We can and should fight for free higher education so that fewer people need to take on debt to learn.

But those changes won’t give current borrowers back the years of their lives they’ve spent struggling within this broken system.

The ancient wisdom of shmita is as radical as a total reimagining of our economic system, and as simple as the transformative potential of a fresh start. It’s time to take this part of our tradition literally.

One thought on “Shmita and student debt”