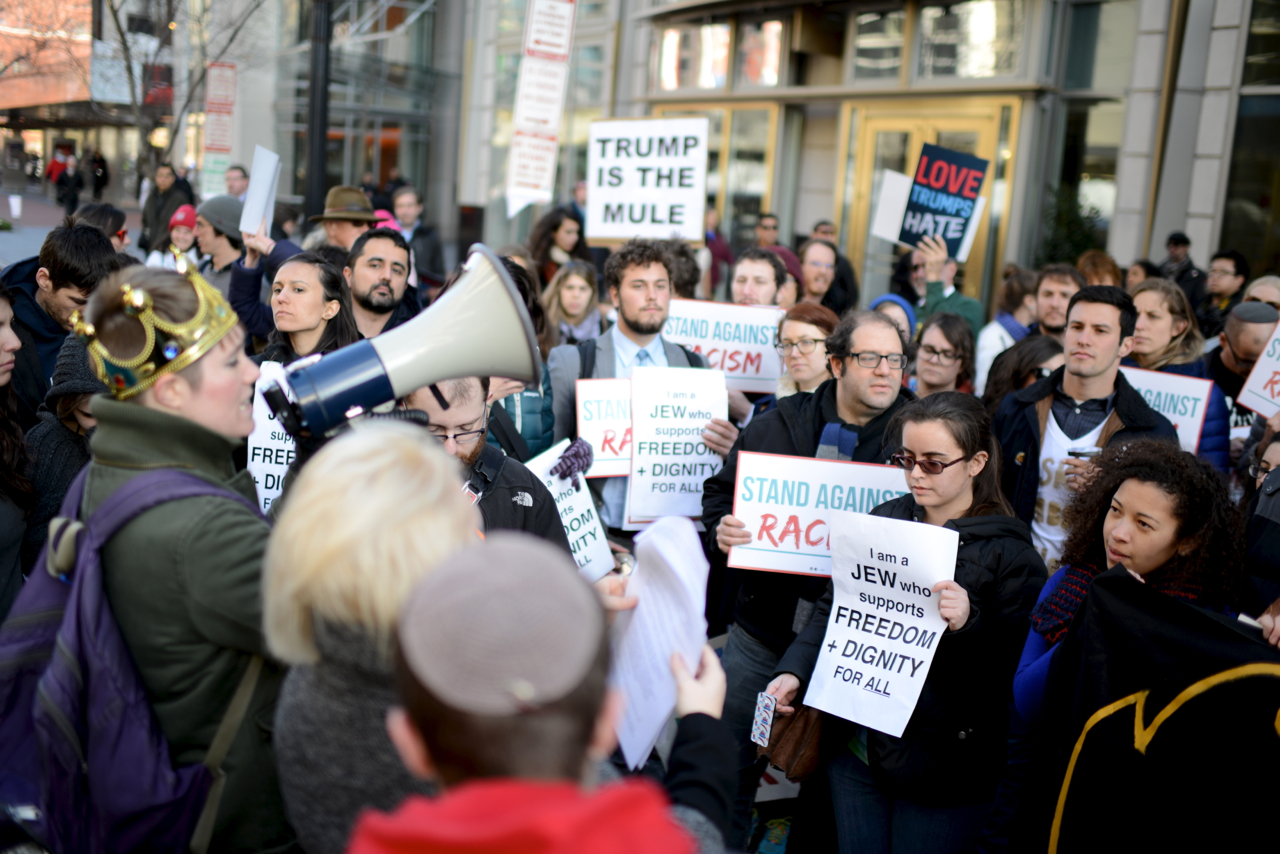 Before the #DumpTrump #DumpAIPAC protest organized by IfNotNow, a friend told me: “If you’re feeling nervous, sing. It’s foolproof.” Sure enough, minutes before I was scheduled to take the megaphone and announce to the AIPAC Policy Conference goers exactly why I refuse to be silent, I felt my hands shaking and a clammy sweat break out.
I was feeling nervous. We had gathered to challenge two very powerful institutions. The first, Donald Trump, has insulted and incited violence against Latin Americans, Muslims, women, immigrants, and refugees. Trump’s values run counter to the most fundamental of Jewish values: tikkun olam; tzedek tzedek tirdof; lo yisa goy el goy cherev; olam chesed yibaneh… (repair the world; justice justice shall you pursue; a nation shall not raise a sword against a nation; we will build this world with love…)
The second, AIPAC, puts the freedom, dignity, and human rights of Palestinians at risk in the name of preserving blind support for Israeli policy at any cost. We’re angry that AIPAC gave Trump a stage from which to spew his hateful rhetoric. However, we are not surprised; AIPAC and Trump deserve each other. Their messages both condone bigotry and violence.
Shamefully, the American Jewish community’s complacency and blind eye vis-a-vis the occupation are shockingly similar to the forces that allow a man like Trump to become so popular. We refuse to stay silent. We refuse to be complicit. We demand freedom and dignity for all. We are urging the American Jewish community to end its support for the occupation.
Many in our community, however, support and enable AIPAC’s agenda, to the tune of 18,000 conference participants. Even more unsettling was that many of us saw family and friends walking into the arena. Hence the nervousness.
In voices that were loud and determined yet simultaneously loving and tender, our group of 200 began singing “Lo Yisa Goy…” (“A nation shall not raise / a sword against a nation / and they shall not learn / any more war”). As predicted, no more shaking, no more nervous sweating.
Into the megaphone, I announced clearly: “I’m speaking up today for my Israeli family and friends who have been told that the only way they can be safe is to carry guns to enforce the occupation, and for the Palestinians who have been killed, wounded, and detained with those guns.” It was empowering, but it was only a small piece in a much larger, moving, Jewish ritual-based evening. We read poetry and even a full Megillah that had been skillfully adapted to draw troubling comparisons between Trump and Haman.

We continued by reading out the IfNotNow principles. In that moment, the principles grounded me and helped me to focus on the task at hand. I have always felt a love for Israel and a deep compassion for the struggle of Palestinians, but in the past, I had found it difficult to find a space where I could stand in solidarity and bring my fully Jewish identity to my activism. In the IfNotNow movement we show up for ourselves by addressing anti-Semitism and working to liberate ourselves from personal and communal traumas. But our liberation is deeply bound up with the liberation of others, including the Palestinian people.

Monday’s protest vehemently affirmed the last of IfNotNow’s principles, which says, “We believe that we will win.” As we sang and marched, heads turned, eyes squinted, and looks of confusion and then earnest curiosity spread among the conference goers. Jewish groups protesting the occupation? Are they singing in Hebrew?
Yes, we were doing all of those things. We were condemning Trump’s bigotry, condemning AIPAC’s dangerous policy agenda, and reaffirming our commitment to our community and to standing alongside others all at once. For too long, AIPAC has told American Jews to check all of their other values at the door in the name of preserving a united, uncritical block of support for Israeli policy. Rabbis and other Jewish leaders inside the conference walked out silently but frankly, their protest was dwarfed by the thousands inside the convention center who gave Trump resounding cheers and standing ovations over and over. Our protest was small, but it was one of the only visible, principled voices of dissent within the Jewish community on what otherwise was a bleak day. And I believe that we will only continue to grow in our promise and power. The protest wrapped up with closing songs and a triumphant march back to home-base. We cleaned up, hugged each other goodbye, and made plans to further this work. Our community has a lot of healing and building to do but we’re determined to build a Jewish community that we are proud to pass on to future generations: a community that believes in freedom and dignity for all Israelis and Palestinians.
Photo by Gili Getz

One thought on “Singing Lo Yisa Goy: My experience at the #DumpTrump #DumpAIPAC rally”