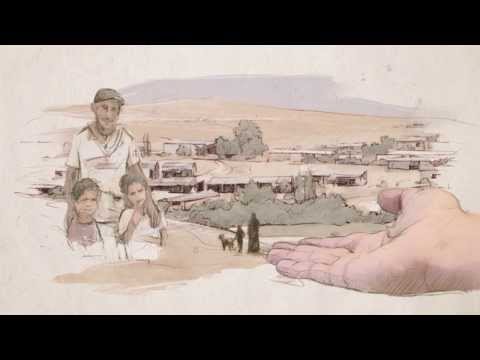 The Bedouin of Anatevka

This is a guest post by Jesse Paikin. Jesse is a rabbinical student at Hebrew Union College – Jewish Institute of Religion, where he has also received a Graduate Certificate in Jewish Education. Before attending HUC-JIR, he worked for a Jewish nonprofit, running educational youth travel programs around the world. He currently lives in Jerusalem and also blogs at jessepaikin.wordpress.com and The Times of Israel. Follow him at @jessepaikin.


Israel’s Negev Desert is not a hospitable place. Vast, dusty, and scorching hot, it takes a great deal of effort to live on this land. Yet it was out of this very land that the Jewish people emerged, and from which the modern State of Israel was birthed. Anyone who has walked its canyons can attest to the feeling of ancient history pulsing out of the stones. Anyone who has laid their head down on the rocky bed and gazed up at the bowl of stars has felt the awe-inspiring power that emanates here. This is the place of the still, small voice.
David Ben-Gurion said that it is in the Negev that the creativity, vigor, and spirit of Israel will be tested. He prophesied that it would be there that the standing of Israel in the history of humankind would be determined (“The Significance of the Negev,” 1955)
Perhaps he was more correct than he knew. Today, close to 60 years after Ben-Gurion presciently spoke of the relevance of the desert, Israel faces a monumental test in this place. Israel’s treatment of its Negev Bedouin population is a trial that has the potential to unravel the dream Ben-Gurion envisioned over half a century ago. The Negev is not only the place where the creativity, vigor, and spirit of Israel are tested; it is the place where the conscience, values, and social values of Israel are being tested today.
What is happening in the Negev? Here are a few facts on the ground – the desert floor, as it were:
How can we respond to this situation? Like most things in Israel, it may be viewed from a number of paradigms. Politically, it is crucial to understand that this is not simply a matter of people alleged to be living illegally on land in unrecognized communities; Israel itself created the legal “status” of the Bedouin communities and imposed it on them. Much like the desert land itself, this is a rocky and precarious situation.
More importantly, this is clearly an issue of basic human rights. As a rabbinical student, this is the most pressing paradigm for me. There is no dearth of Jewish commentary on human rights and the paramount supremacy of protecting the rights of the strangers living under Jewish rule. Yet perhaps the most pointed call for the need for Jews to protect the rights of the Bedouin comes not from our ancient texts, but from a rather unlikely source…
Summoning the voice of the fictional Tevye, actor Theodore Bikel recently called on us to not forget the lessons of life in the shtetl. He passionately and poignantly shared: “What hurts is the fact that the very people who are telling them [the Bedouin] to ‘Get out’ are the descendents of the people of Anatevka. My people.”
With the pleas of Tevye in my mind, I have added my name to a petition to the Israel government from 780 other clergy members and clergy-in-training to protect the basic human rights of the Bedouin. The petition and letter from Rabbis for Human Rights and T’ruah: The Rabbinic Call for Human Rights, calls on Prime Minister Netanyahu to stop the Prawer-Begin Plan. In addition to my own signing, I am proud of the principled and courageous stand that my Movement has taken in standing up to this injustice.
Certainly, the Israeli government has the right to determine how to best respond to the needs of the land and its citizens. Yet the current proposal is one which disenfranchises a significant population, further reduces their access to basic human necessities, and only exacerbates a problem that the government itself created through misguided and inhumane policies.
It is incredibly painful to view this situation as a Jewish resident of Israel. With the recent decision to evict Bedouin residents of Umm Al-Hiran and replace the village with a religious Jewish community, it hard to not presume that the government is simply destroying the Bedouin communities to make room for new Jewish settlement of the Negev. Israel already has one demographic crisis on its hands (see: Israeli Arabs and the Palestinians) – why would it willfully create another?
Heeding Ben-Gurion’s charge, we must ensure that the Negev is the birthing ground of Israel’s moral vigor, not an ethically desolate and suffocating environment.

6 thoughts on “The Bedouin of Anatevka”