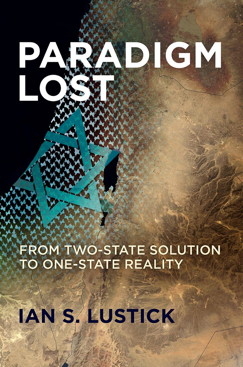 The Death of the Two-State Paradigm

Almost half a century ago, in the early 1980s, many pundits warned that the window for creating two states was closing. Israeli geographer Meron Benvenisti, for example, described the situation as “five minutes to midnight.” He noted that over 50,000 Jews lived over the green line and warned that there would soon be over 100,000, which would preclude the possibility of creating a viable Palestinian state in the West Bank. Soon thereafter, Amos Elon and others noted that “for all practical purposes” the West Bank was already annexed, “perhaps irrevocably.”

Today, there are over 600,000 Jews in the West Bank, including 200,000 in East Jerusalem, and their numbers grow daily. A developed system of access roads and other restricted areas have reduced Palestinian enclaves to a series of disconnected Bantustans while the Green Line has been metaphorically and literally erased from Israeli consciousness and most maps. And yet, politicians and pundits continue to talk about the need to create two states “before it’s too late.”

Whether or not two states can ever be forged in the future is an unanswerable question. However, the key to any movement forward rests in a sober assessment of the current reality, and that reality is one state, documented in Ian Lustick’s new book, “Paradigm Lost.” Spoofing Milton, Lustick – a political scientist at the University of Pennsylvania and long-time scholar of the Israeli-Palestinian conflict – tries to chart how the two-state paradigm became the “paradise” vision of Liberal Zionists, how the possibility of this paradise was scuttled, and how we might move forward.

Lustick argues that the two-state paradigm was a theory, a vision, and like all scientific theories its adherents have difficulty letting it go even when the evidence overwhelmingly argues against it. It is not only obsolete because of the sprawling West Bank settlements and the roads and installations that connect them, but because of the very nature of Israeli culture and politics, which is the real focus of the book. Once we accept the one-state reality, and understand how we got here, we can develop new theories and visions based on real conditions that can move us forward. That is what this book seeks to do.

The book is divided into five chapters. The first, “Flaw in the Iron Wall,” recalls the basic Zionist strategy developed by Jabotinsky in the 1920s and followed by most Zionist camps ever since. The Arabs would never accept Jewish colonization and power, Jabotinsky reasoned, and therefore they had to be smashed repeatedly into submission such that moderate voices would emerge and make a deal that allowed for shared presence.

The plan worked — though Sadat had to remind Israel of this in 1973 — but it backfired. It did not account for Jewish euphoria in their power undermining their own willingness to negotiate. Instead, Jews increasingly denied any Palestinian legitimacy in the land, for example by using their power to undermine instead of nurture Palestinian leadership that would work with them through incarceration, assassination, and other acts of military suppression. Lustick traces Israel’s repeated refusal for decades to negotiate a two-state solution and its blocking all efforts that might have led there. “Victories produced expansionism,” he writes, “instead of generosity.”

Jewish euphoria in their own power paradoxically then mixed with paranoid fear of their own destruction with the rise of the rise of what he calls “Holocaustia.” This is the obsession with the Holocaust in Israeli political culture as proof of its own correct vision, but also — especially since Begin and then picked up by Netanyahu — as a circular argument against moderation and deal-making. This well-known phenomenon is a far more recent development than I had realized. It presents all Arabs and Muslims as Nazis, and therefore any effort by anyone (Jew or state) to question or undermine the harshest possible policy against Arabs as equally so. “Holocaustia – intense, pervasive, and relentlessly reproduced – is protected from critical scrutiny by an aura of sacredness and a presumption of universal agreement about its claims.” Its logic and rhetoric stoke hatred, justify any action against Palestinians and undermine any ability to move towards reconciliation and two-states. Especially interesting was his analysis of how Begin brought Mizrahim into this discourse, despite their largely having not come from communities decimated by the Holocaust.

America then enters the story and complicates it further. Chapter three, “The Lobby and the Cocoon,” is a detailed analysis of AIPAC and through it of American influence on Israel, which has directly undermined the possibility of two states by protecting Israel from any consequences as it moved to destroy that possibility. “The American-spun cocoon around Israel,” he writes, “has vastly distorted Israeli perceptions and greatly reduced the country’s ability to gauge the real effects of its policies. The cocoon ruined the careers of dovish politicians while enhancing the prospects of those catering to Israeli fantasies and fears. Opportunities for peace that might have been grasped were missed or destroyed.”

Having laid out the major pieces of the puzzle, Lustick puts them together in his penultimate chapter, “Dead Solution Walking,” which traces the rise and fall of the two-state solution, the reasons for its attractiveness, the reasons it has been destroyed, and the reasons people are clinging to it despite that fact.

Finally, he concludes with a reality check on the current situation and alternative visions that are based on that reality, while addressing the typical counter-arguments. His last chapter brings the receipts such as polling data, but also raises possibilities based on reality that are seldom considered by those clinging to a discredited, outdated theory.

“In desperation,” he writes, “two-staters unable to chart a plausible path forward still maintain that there is no alternative path. They correctly point to the absence of a coherent “one-state solution” paradigm. Despite decades of efforts, no detailed plan or political strategy has been devised for how such a future could be attained. But neither God nor history guarantees that the Israeli-Palestinian problem has a “solution.” It is illogical to argue, as two-state advocates now commonly do, that since there is no one-state solution, there MUST be a TSS. To argue in this way conflates two meanings of “must” as something “Acceptable” versus something “inevitable. Sadly, the world is not organized so that what is deemed acceptable is also necessarily inevitable – or even possible.”

That said, new political alliances can form and new possibilities are available if we just open our eyes to them. Moreover, he suggests various reasons why this is actually likely to occur, although it will also likely take quite a bit of time, as did the move towards democratic inclusion in America.

In any event, there is now one sovereign state in the entire area from the river to the sea. It is called Israel and it controls every human in that territory, but it does so with vastly different legal systems and rights in a system that has been plausibly labeled apartheid, the legal term for a discriminatory legal arrangement that need not precisely match South Africa’s. The “de jure annexation” being hung over us like the Sword of Damocles – now temporarily at bay due to the deal with the United Arab Emirates – does not change the current one-state reality.

Whether you still hope for two states or not, conversation about Israel/Palestine is almost impossible between someone who has read this book (or one similar to it) and someone who has not. You may not agree with all of his conclusions, but it is essential reading for anyone interested in the conversation. Continuing to pursue this paradigm – dead or not – requires addressing his argument and explaining how it will adapt to it. The writing is helpfully quite good: lucid, well organized and with titles and subtitles that clearly guide his argument. Even the metaphors and puns – often annoyingly cute in some books – work well here.

Liberal Zionists do not want to let go of the two-state paradigm for understandable reasons. Paradoxically, advocating their vision has provided cover for the de facto annexation that has sunk it as cynical politicians and pundits continue to speak of two-states while supporting settlement growth and land appropriation. Perhaps it will be possible some day to produce such a solution, but the path forward must be through accepting the one-state reality that exists now and its undemocratic nature.