“There will come a day when a carrot, freshly observed, will spark a revolution.”– Paul Cezanne.
Announcing the (official) launch “The Jew & the Carrot: Hazon’s blog on Jews, Food & Contemporary Life” at JCarrot.org! The Jewish community has an amazingly complex relationship to food — 3,000 years of it. As the rest of the world is waking up to the notion of sustainable agriculture, local foods, and healthy eating, so is the Jewish community in the States and in Israel.
“The Jew & the Carrot” covers this fast-growing and exciting corner of the blogosphere — with the aim of seeing a healthier and more sustainable Jewish community, as a step towards a healthier and more sustainable world for all. Check it out…
Special Pesach features include: 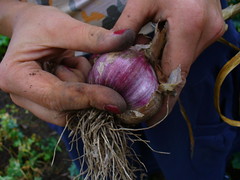 Check us out! To get your food blog linked on JCarrot or to send tips, blog cross-posts and news articles, speak to us. (PS — Hazon is hiring.)
JCarrot aims to:

The Jew and the Carrot is a project of Hazon, an organization working to create a healthier and more sustainable Jewish community — as a step towards a healthier and more sustainable world for all.
The Jew and the Carrot relies on the talents and passions of Jews of all regions and levels of kashrut who care about food and what Jewish life may have to say about the pressing issues of our day. We welcome freelance contributions, pitches, cross-posting from other food blogs, news tips and requests to join the team.
To join, contact our editor in chief Sarah Rose at [email protected].
Send tips, blog cross-posts and news articles to [email protected].
Our Editors in Cheif
Sarah Rose is a writer living in New York. She is currently working on a non-fiction book, FOR ALL THE TEA IN CHINA, the story of a 19th Century botanist-turned-spy who stole the secrets of tea from Imperial China and brought tea plants to India as an undercover agent for the East India Company. To be published by Viking 2008 (Hutchison in the UK). Sarah has worked as a journalist for Reuters and the Miami Herald, and as a stringer and travel-writer based in Hong Kong. She was previously Managing Editor of Plenty Magazine, a lifestyle magazine for the “green” generation. She holds a bachelors degree from Harvard in English literature and a masters degree from the University of Chicago in humanities.
Leah Koenig graduated from Middlebury College in 2004 and, after a summer stint working on an organic vineyard in Tuscany, came to work at Hazon. She coordinates several of Hazon’s food-related projects, including Tuv Ha’Aretz: Hazon’s Community-Supported Agriculture Project. Outside of work, Leah’s interest in food continues – she is a member of the Park Slope Food Co-op and a Brooklyn CSA, a frequent green market shopper, and an enthusiastic cook. Leah also works for Zeek: A Jewish Journal of Thought and Culture as an editor an writer. She recently wrote an article for Zeek called Goldbergers and Cheeseburgers: Food and Particularism among American Jews The article appeared in the fall/winter 2006 issue of Zeek, which is co-sponsored by Hazon and focused on food and Jewish life.
Nigel Savage is the director of Hazon, which he founded in 2000 with the Cross-USA Ride. He is believed to be the first English Jew to have cycled across South Dakota on a recumbent bicycle. Nigel has an MA from Georgetown and learned at Pardes, Yakar, Hebrew University and Jerusalem Fellows. Previously he spent 10 years in the English equivalent of Wall Street. He is a founder of LimmudNY and Vice President of Isabella Freedman. Renowned as a cook and entertainer, he endeavors to give up sugar and caffeine, and loves a good sharp parmesan.
Special thanks to Mobius for his design & programming on this sexy, delicious new blog. Also special thanks to JSpot.org for extra consulting & advice.