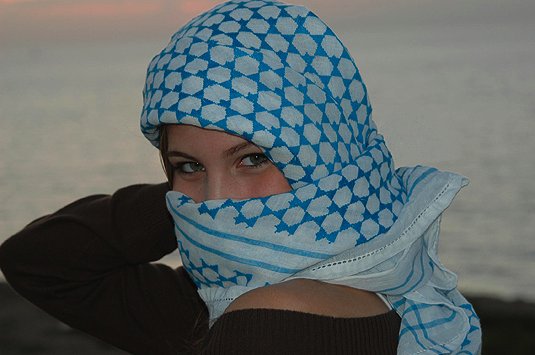 The night I came up with my now infamous kaffieyh tzitzit (aka tallit kattan shel Shabbatai Tzvi) one of the thoughts that crossed my mind was to create a blue and white kaffieyh laden with Magen Davids instead of black diamonds. The scope of the project was well beyond my means, but it was one of those brain crack ideas I kept on the back-burner, awaiting the right moment in which I could finally pull it off.
Well, it looks like I’ve been beaten to the punch — and by someone coming from a very different place than I.
Personally, I conceptualized “the Jewish kaffiyeh” as an art piece — a commentary, if you will, on the nature of Jewish extremism in Israel, and what I viewed then as the narrowing gap between Jewish and Muslim extremists in the Occupied Territories.
For Mark Israel, creator of the kaffiyeh yisraelit, “The Khaffiya has become a trendy accessory among students but has obvious connections to the Arab cause preventing Jews from wearing it. Our idea was to produce an Jewish/Israeli version that would allow the wearer to identify themselves with Israel and at the same time be fashionable.” In that, Israel wanted “to allow Jewish people to wear this popular item without any reference to being a supporter of Arab or anti-Israel groups.”
As an art piece, I consider it an intellectual provocation — a think piece, if you will — particularly when contextualized within the safe setting of an art gallery. As a fashion accessory? I find it a somewhat troubling co-optation of a Palestinian symbol of resistance — one with a lot of baggage, as the kaffiyeh rises in ascendancy on the far-Right and the far-Left as a symbol of explicit hostility towards Israel and its supporters.
Let alone the fact that, in hipster enclaves such as Berlin and Brooklyn, the kaffiyeh is so ubiquitous it’s already passe, as a fashion item it is viewed by many in the Palestinian solidarity movement as a trivialization of the Palestinian struggle. As an explicitly pro-Israel rendition of a “fashionable” kaffiyeh? Frankly, I’d be afraid to walk the streets in one of these. You’re just looking for a fight.
That said, I’m still going to get one. But only because I thought of it first. 😉
Pre-orders, props, and hate mail can be directed to mark at bianca-alena dot co dot uk.

50 thoughts on “The Kaffiyeh Yisraelit”